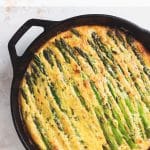 This asparagus and ham frittata is savory, cheesy, and the perfect showstopper for your next spring brunch! 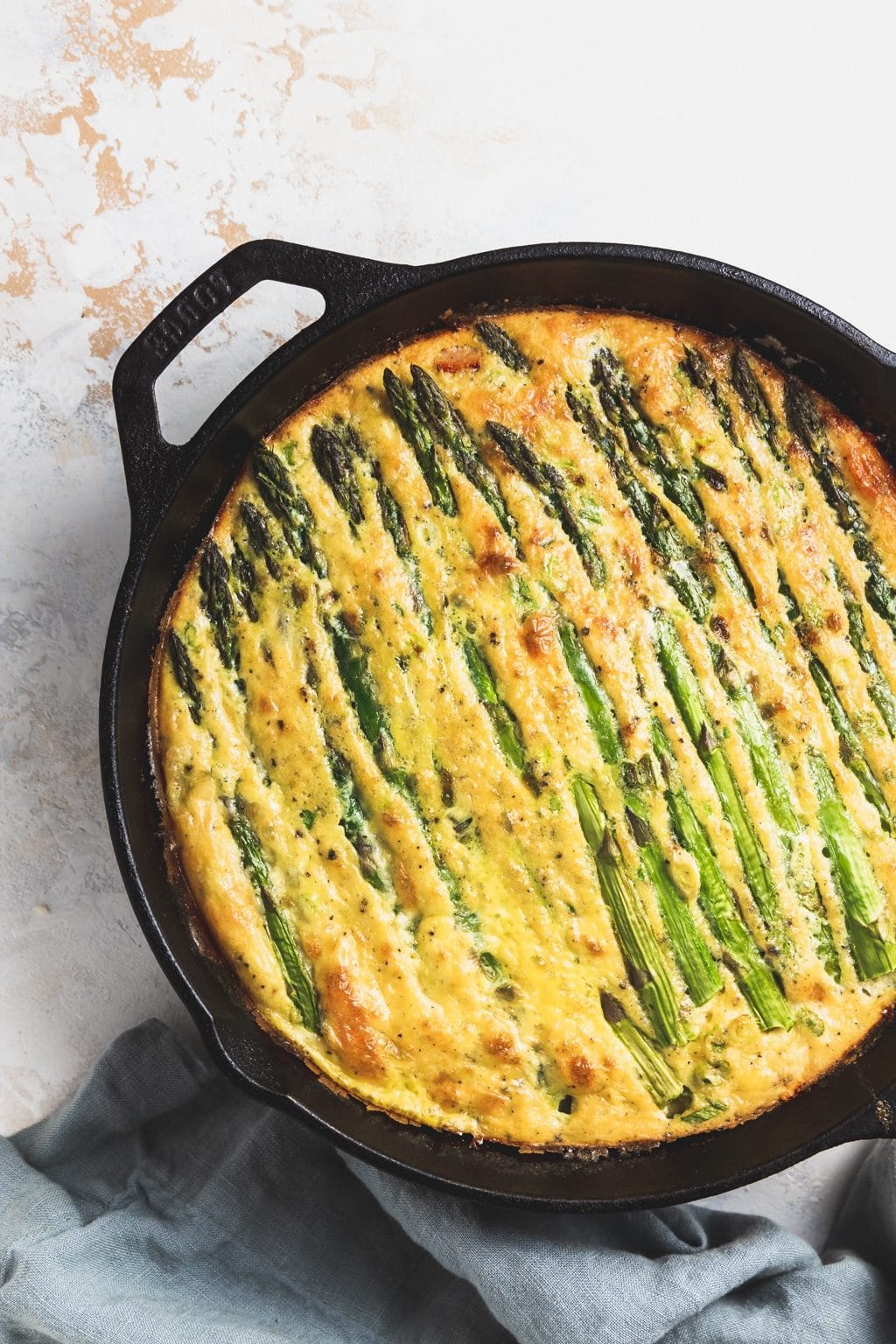 *This post was originally published on April 24, 2018. It has been updated with new content and photos. Enjoy!

Yesterday it was a balmy 71 degrees. Quick sidenote, did you know that the word balmy actually means “pleasantly warm”? I’ve always associated it with sticky, East coast, 90 degree days, and so I was little shocked when I learned that I had been misusing it for literally decades. The more you know.

Anyway, it was the kind of weather that makes you immediately feel great just to be alive. It’s when you (temporarily) forget about this or that chore that needs to be done, or why you always seem to get the cart with the wonky wheel at the grocery store. It is a feeling of excitement, freedom, and anticipation of all the beautiful days to come. And when I think of beautiful, carefree days I think of…unemployment. 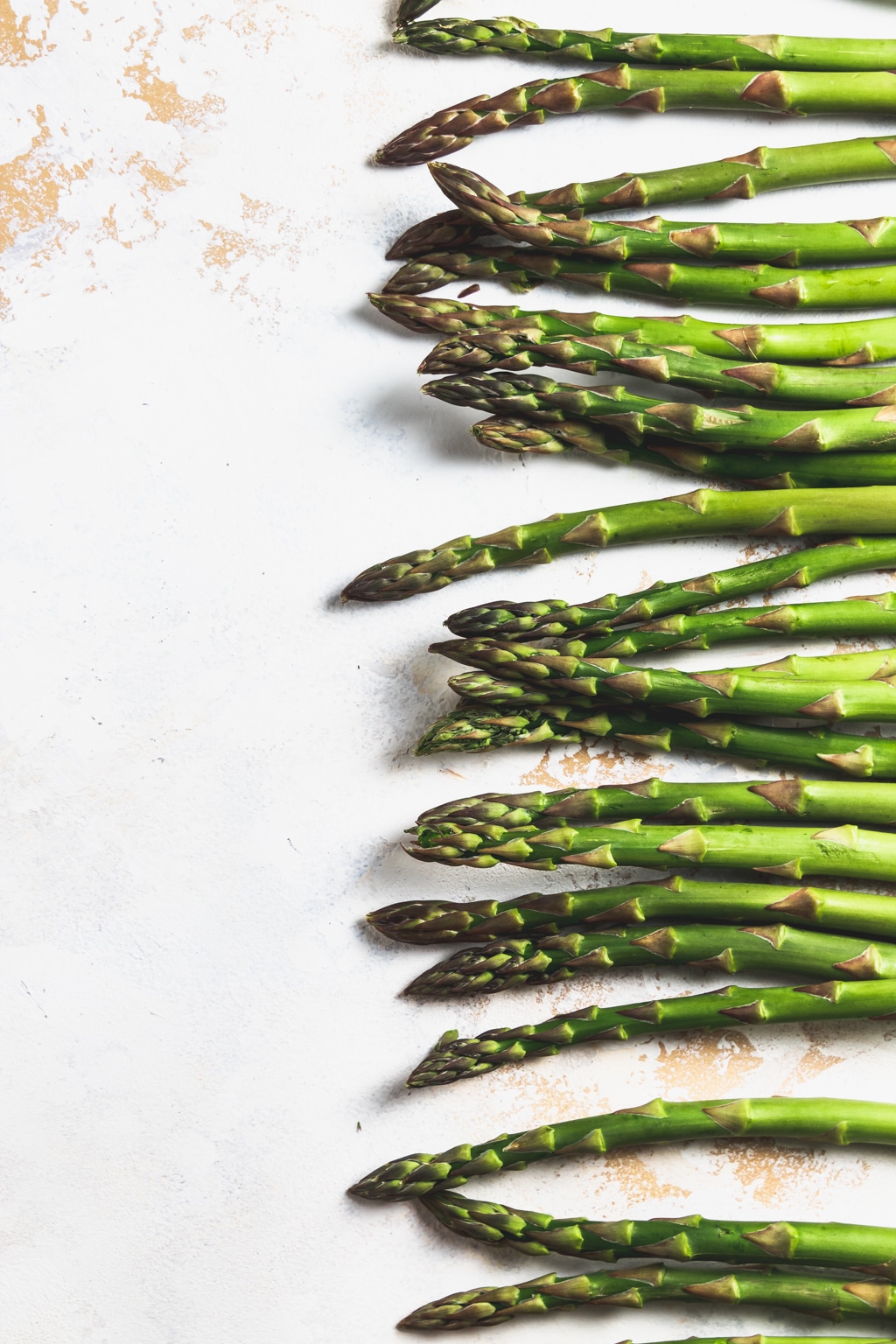 Not the kind that makes you break out in a cold sweat at night (well maybe occasionally), but the sort of unemployment of your early 20’s, when it’s normal to be broke and frivolous all at once. I feel like when I was between jobs in my 20’s, sure there was a lot of anxiety about making rent and rationing toilet paper. But there was weirdly also a lot of brunch – which seems to me like the ultimate in “extra”.

Maybe it was that my schedule was free and breezy (re: I was routinely sleeping until noon or later), or perhaps it was the emphasis on living that Carrie Bradshaw lifestyle (I am WAAAAY dating  myself with that one) that had me dining al fresco on eggs bennie and watered down mimosas so often. But even funemployment has its downsides (obviously many) and at some point I had to learn to make brunch for myself, and my friends, at home where the bloodies were definitely not bottomless and no one had a tiny dog in their purse. And thusly my love affair with the frittata was born. 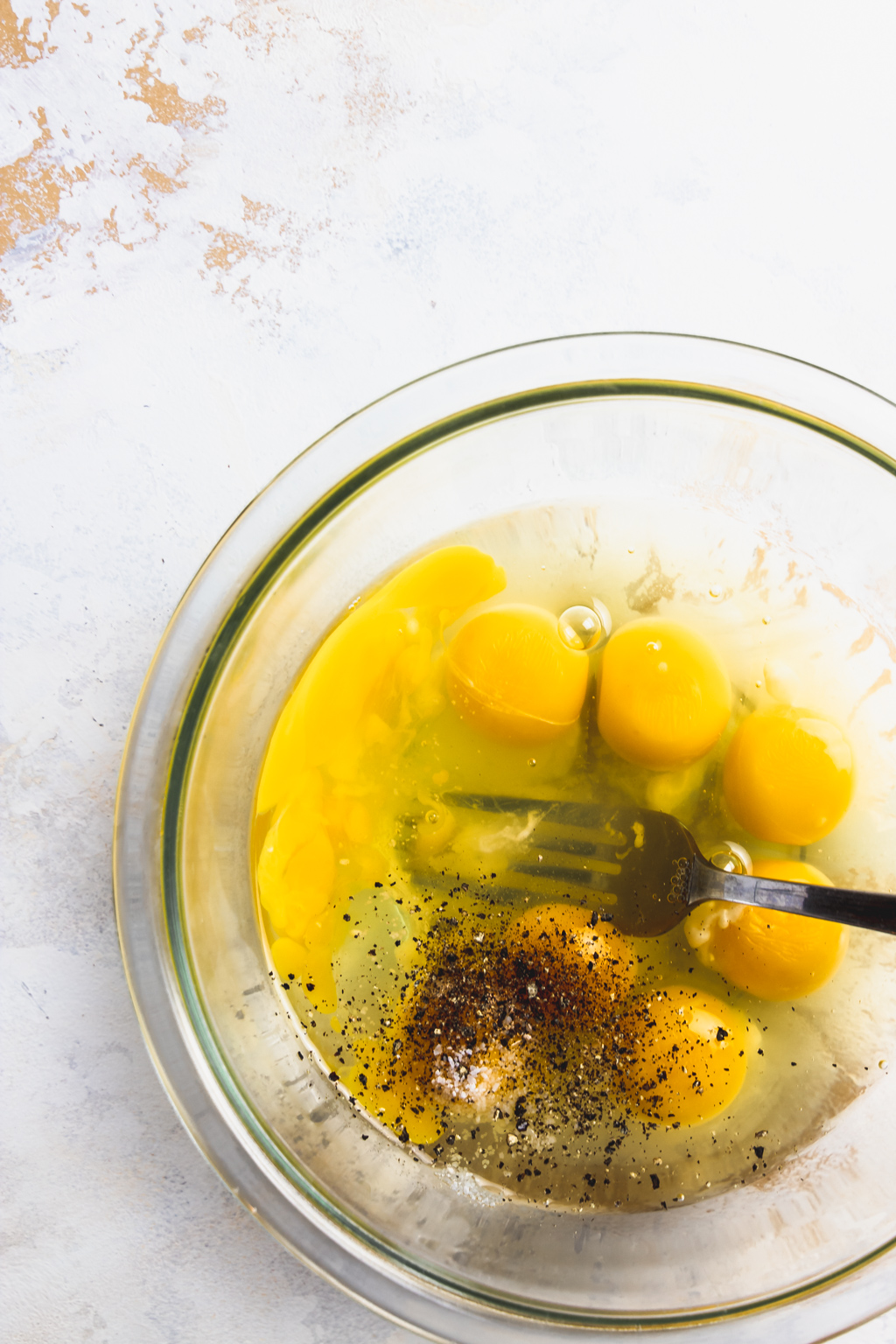 How Frittatas Changed My (brunch) Life

Have you ever had people over and tried to cook eggs to order? Nuh uh. Not doing it. Not now, not ever. Maybe if I REALLY like you I’ll fry up a pan of over easys to top off a breakfast hash, but mostly if I’m doing any brunch entertaining these days it’s frittatas or GTFO (I’m a very aggressive entertainer, I know).

Why are they so good for a crowd? Because you mix it all up, pop it in the oven, and go on with the rest of your life. Make a big batch of toast, pour some dranks, pet the cat, chat with your friends – all while this eggy, cheesy, hammy, spring time number gets melty and puffy and golden brown in the oven. Then slice it, serve it, and be happy that you can have brunch AND pay rent (or if you’re beyond that financially difficult time in your life – just that you’re a clutch entertainer and that your friends appreciate your mad skills).

Let’s start with what a frittata is not. It’s not a quiche, it’s not a scramble, it’s definitely not an omelette (aw hell no). I’d say honestly it’s much simpler than any of those. Think of it like a crustless egg pie where the fillings are only limited by your imagination, and the appropriate time to serve is ALWAYS.

Obviously it’s easier than an omelette – which to be honest I only have success with about a third of the time. It doesn’t have to be babysat like a scramble – and stays warmer, longer for that matter. And quiches are great, but then you gotta make crust, and who wants to do that on a Sunday morning. Also, you can make it and serve it straight from your cast iron (or any oven proof skillet) and you know I love me a cast iron breakfast. 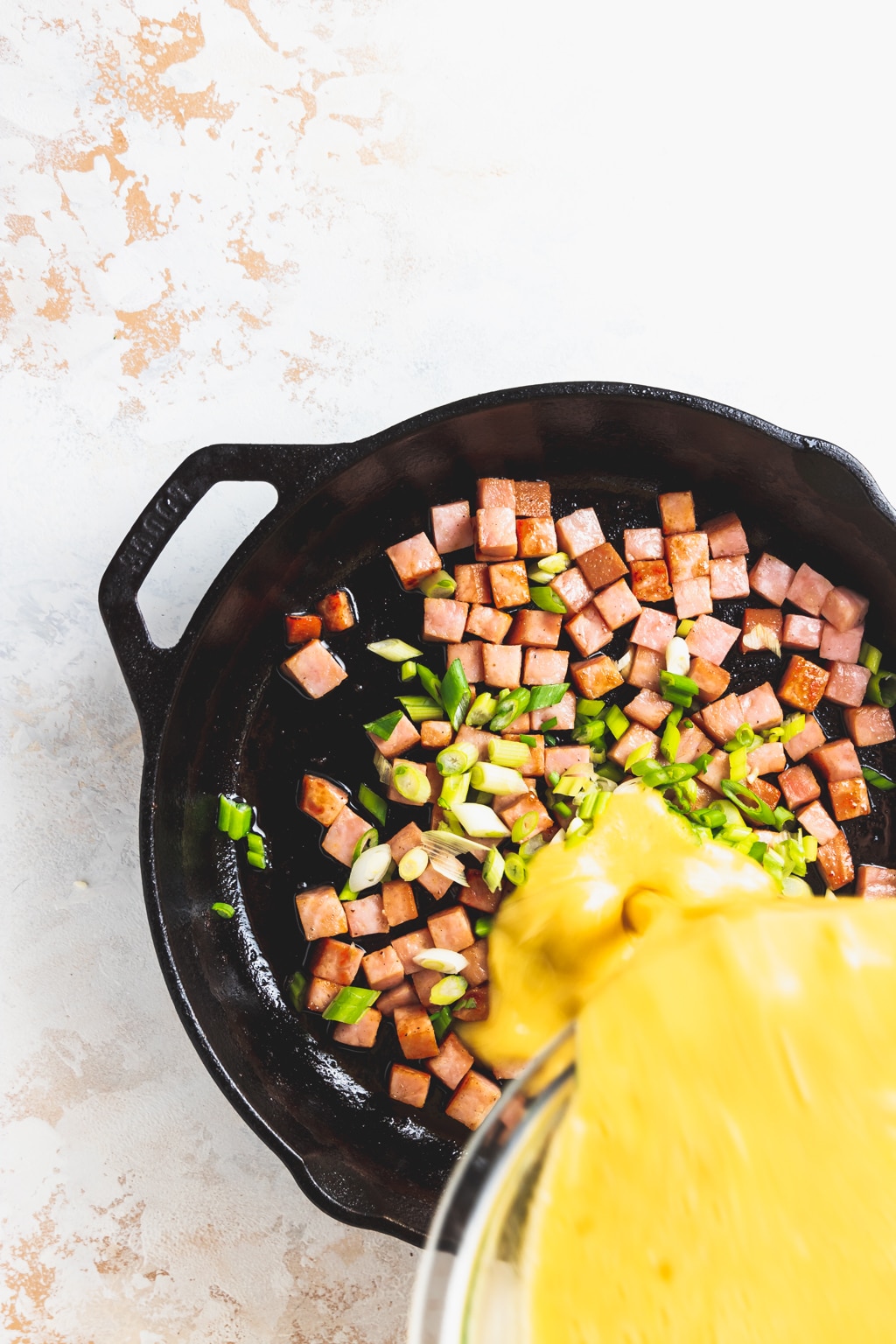 But let’s talk about THIS frittata. If you’ve read this blog for even a short time, you’ve probably seen the parade of easy to make, oven baked eggy wonders that are frittatas. But this one is my favorite for a few reasons. 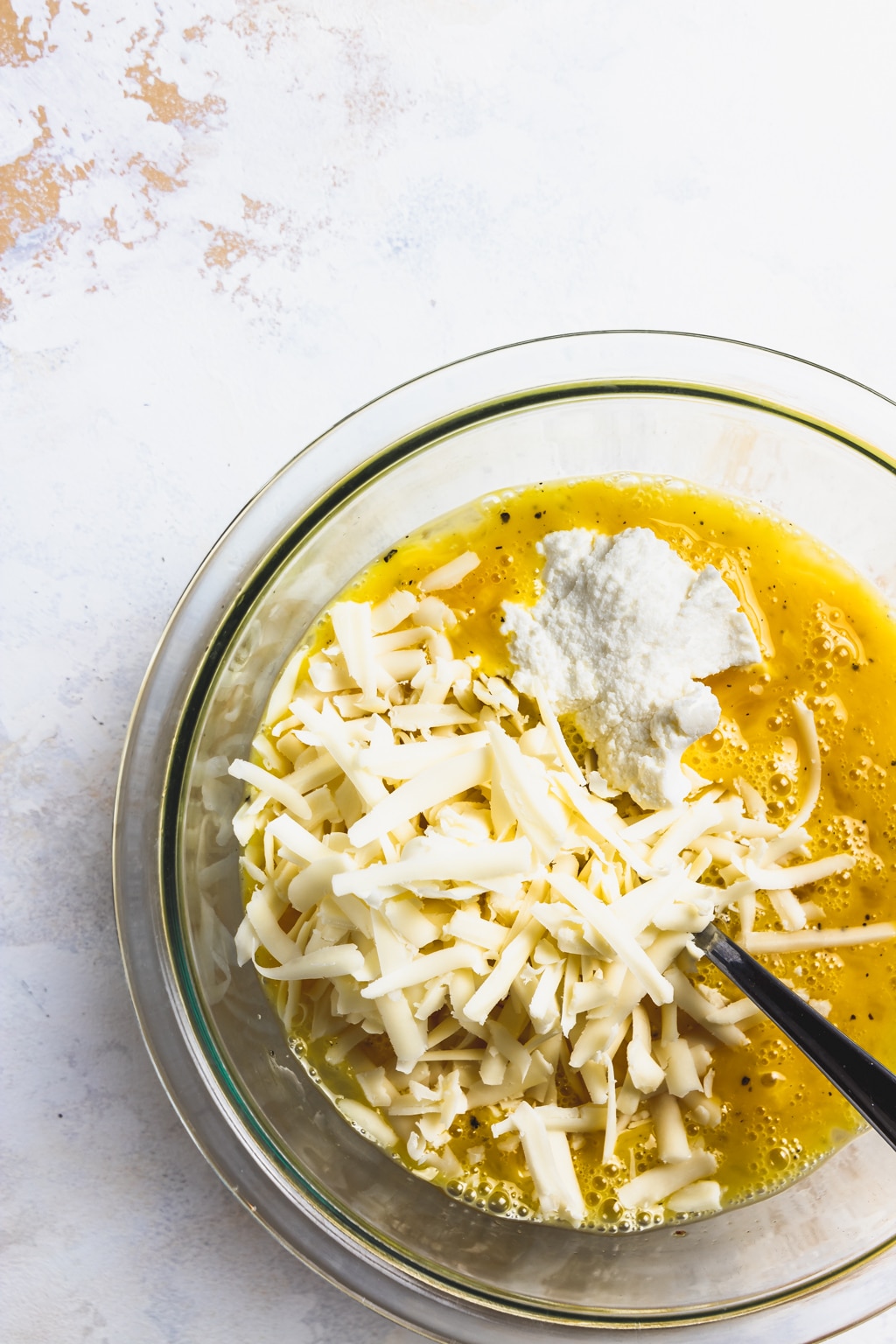 Tips for making the perfect frittata

Over the years and after making dozens if not hundreds of frittatas, here’s my comprehensive list of frittata must-do’s and helpful hints. Here we go.

So now that you have a friggin arsenal of tips, tricks, and oh duh, a recipe (below), you can brunch at home with the best of them. And if you’re reading this and you happen to be a broke as a joke 20 something living that ramen noodle dream, just remember that it will get easier. But don’t spend all your money on brunch – make it yourself! 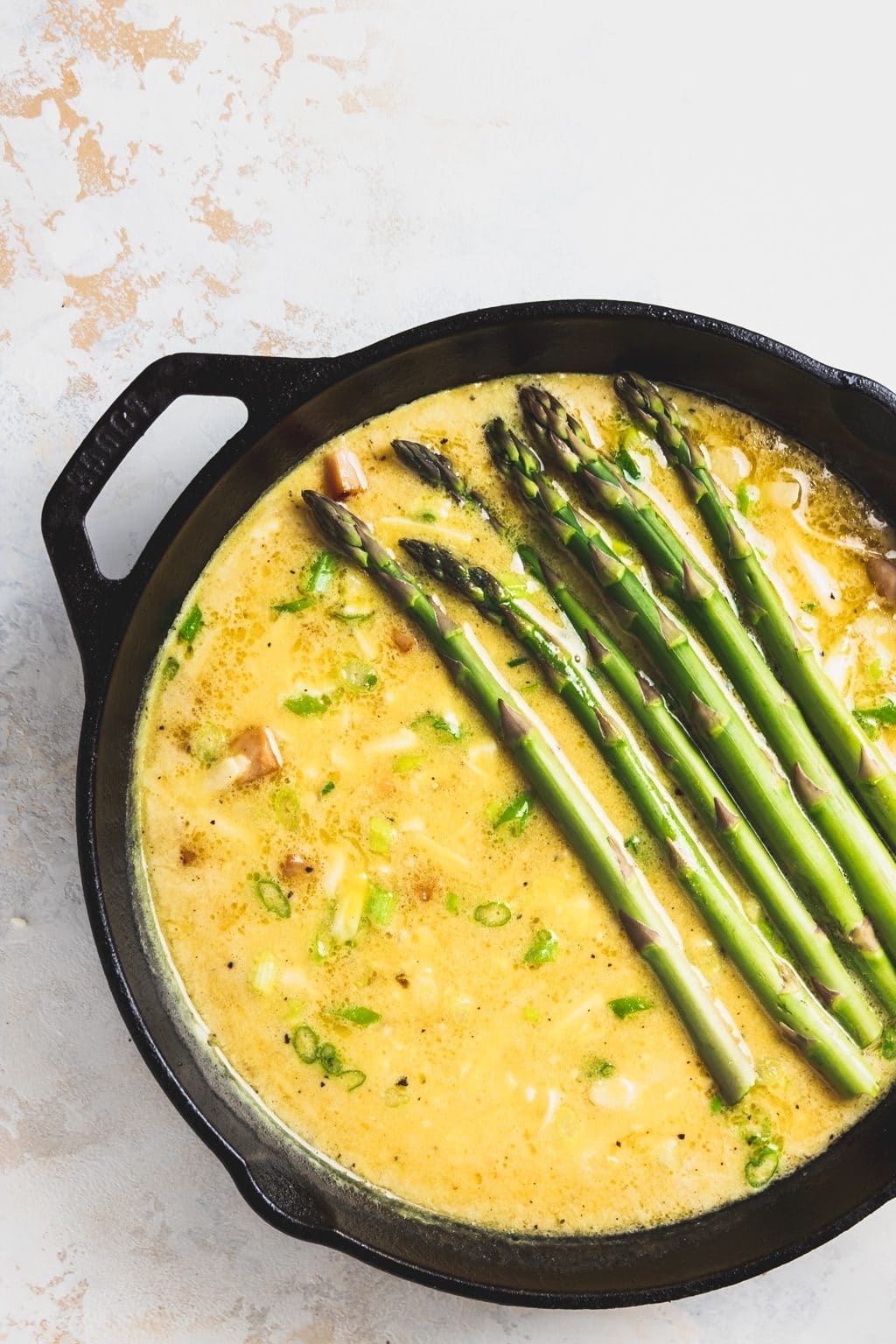 Like this recipe? Give it a rating and throw a cool comment in there too. Thanks friends! 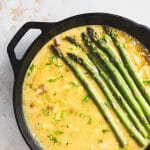 This is the best asparagus frittata ever if I do say so myself. It’s savory, cheesy, and perfect for a spring brunch. Grab the recipe and pull out your cast iron. Breakfast is coming!

Preheat your oven to 375° F. In a 10 inch, oven proof skillet, heat oil over medium heat. Add ham and scallions and sauté until scallions are wilted and ham takes on some brown color, about 5 minutes.

In a large bowl whisk the eggs until the whites and yolks are thoroughly combined. Add the salt, pepper, ricotta and cheddar cheese, and whisk to combine.

Pour the egg mixture evenly over the ham and arrange asparagus over the top of the egg mixture. The egg will puff up around the asparagus, so it’s ok if the asparagus sticks up a little bit. Transfer to the middle rack of your oven and bake for 20-25 minutes, or until the top is golden and puffed and the tip of a knife inserted into the center comes out clean. Let cool for 5 to 10 minutes and serve.

If you want to make this a little richer (although it’s plenty rich with the cheese) you can add 2 tablespoons of half and half or heavy cream. It’s totally not necessary but very good.

This can be served hot or room temperature.

If you’re worried about sticking, just coat your pan with a little nonstick spray before beginning the recipe. But if you have a decently seasoned cast iron pan, then you should be fine. 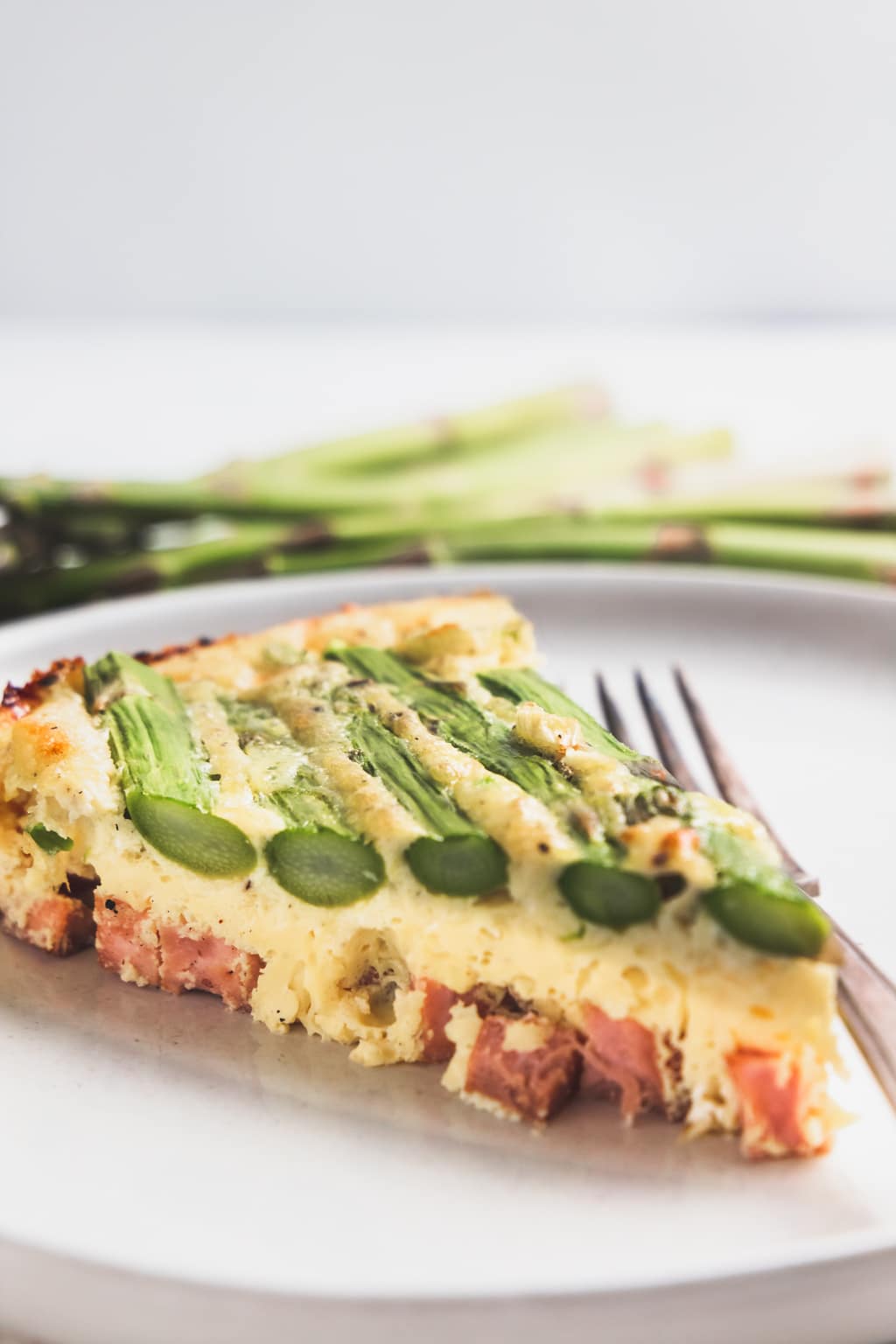