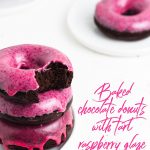 Good god we are DROWNING IN DONUTS. It’s like a ball pit, except oddly enough, not as disgusting (point being – ball pits are filthy). There have been four different versions of these chocolate donuts, along with a honey lemon chia variety thrown in (when I ran out of cocoa powder) that went into the bin after I realized that the new buckwheat honey I bought kind of smells like a foot. But now I am here, a couple days before Valentine’s Day, sitting in front of a batch of the most glorious, chocolately, deep, dark, donuts with a sweet and tart raspberry glaze that will just about melt your heart. 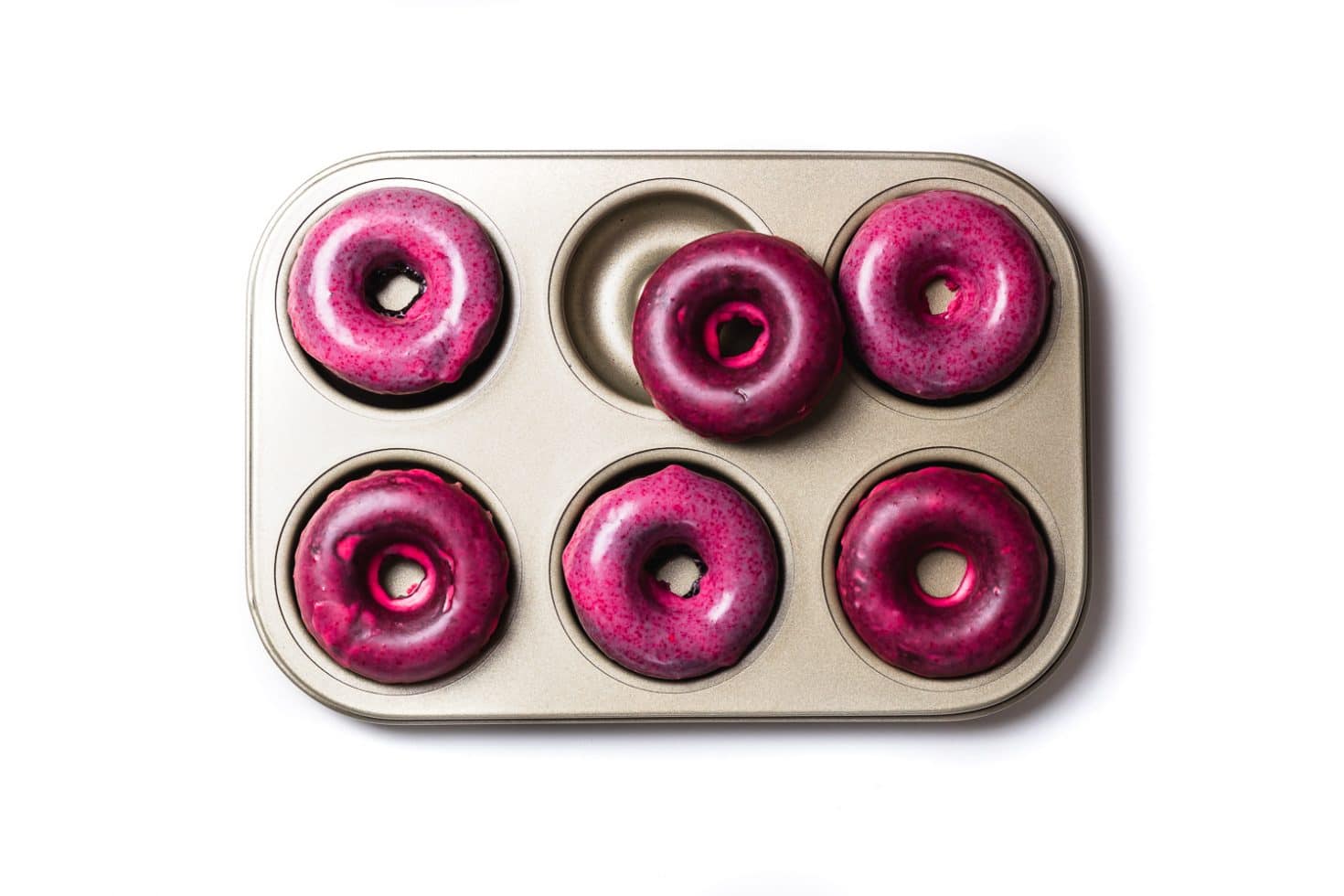 So I’ve spoken about our Valentine’s Day traditions here before, but let’s go back a little further and talk about those days before love, marriage, and SVU marathons on the couch. Valentine’s Day can be a mixed bag. And I’ve definitely spent a number of them in various states of denial, joy, depression, rebellion, ennui (a LOT OF ENNUI), and maybe even occasionally something resembling rage. But regardless of how I felt about the manufactured romance, twitterpated couples, and various shades of pink from year to year, I was always pretty jazzed about the treats. Big surprise – she came for the food. Damn straight I did! Because at the end of the day you should be in love with YOU and treat yourself accordingly. 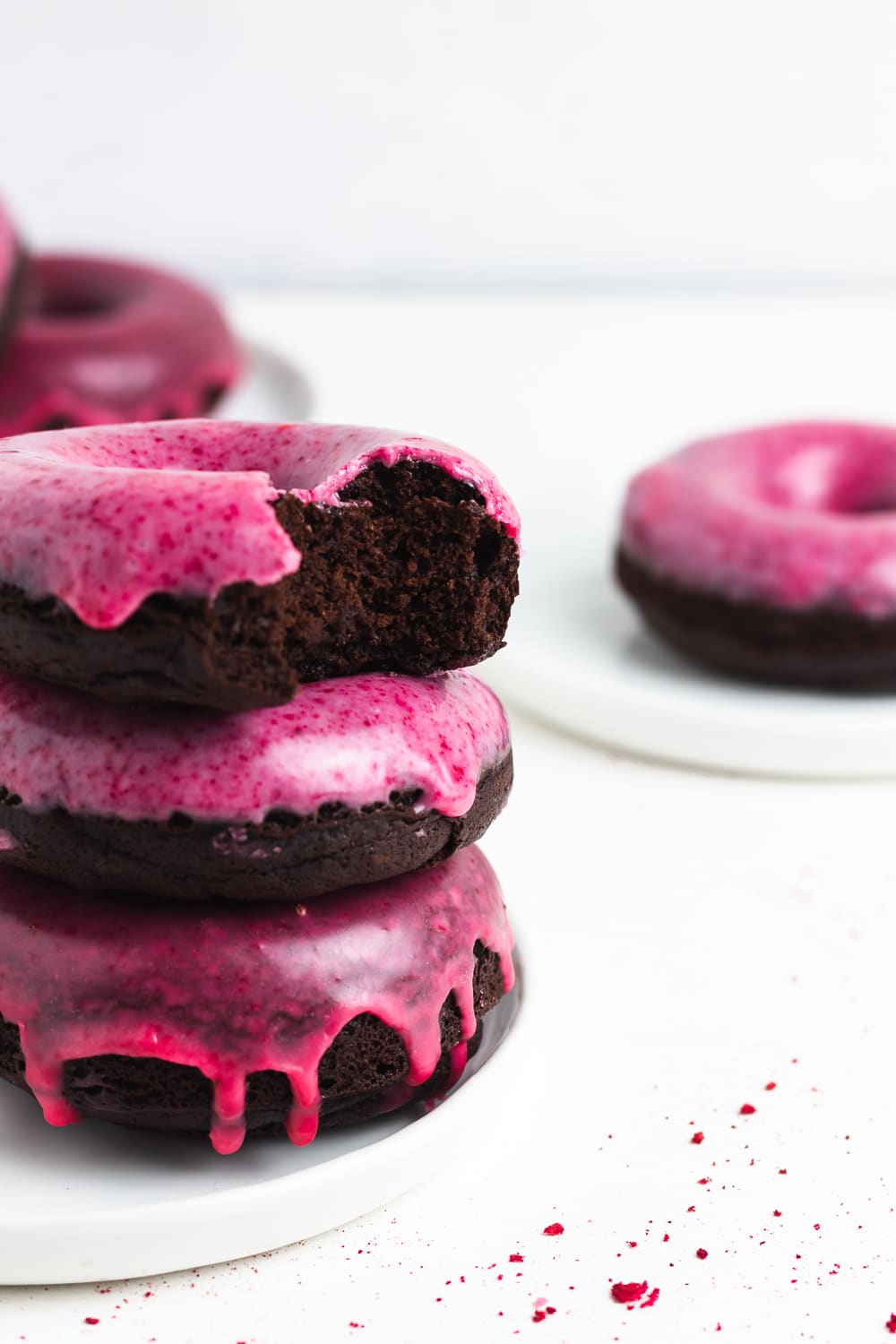 So today dear friends, I’m putting up a decadent treat that I have literally spent weeks researching, testing, re-testing, re-testing AGAIN, and then finally slathering in a hot pink glaze that would make Lisa Frank blush. Why all this time devoted to donuts? Well simply because I love you, and I wanted to show you the best way I know how. Plus, chocolate and raspberry is one of my all time favorite flavor combinations, as seen here. I mean it’s a deep, dark, fudgy chocolate donut draped in a punchy, fruity glaze? Excuse me while I take a moment.

But really, the juxtaposition of sweet and tart gets me every time. If you’re not a fruit with chocolate person I totally hear you, and you should check out these peanut butter babies, or cream cheese maple delights, but if you’re like me then these will make your heart skip a beat, fill you with butterflies, and make you just about fall in love. And who doesn’t like falling in love? 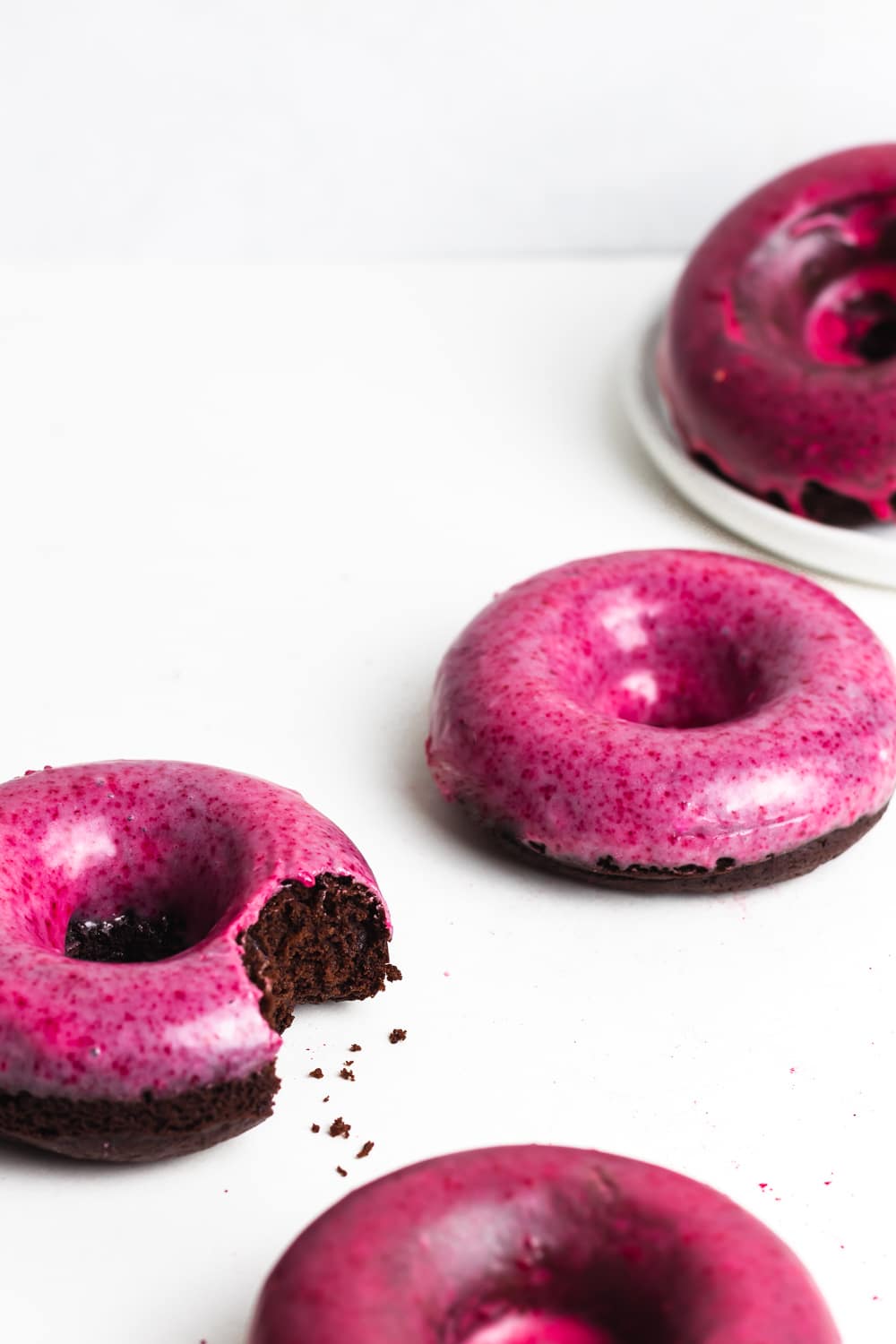 How to make the best baked chocolate donuts

You don’t make these as many times as I did and not have some knowledge to show for it. Here are some helpful tips I learned along the way so you don’t have to make four dozen donuts (I mean unless you’re into that sort of thing). 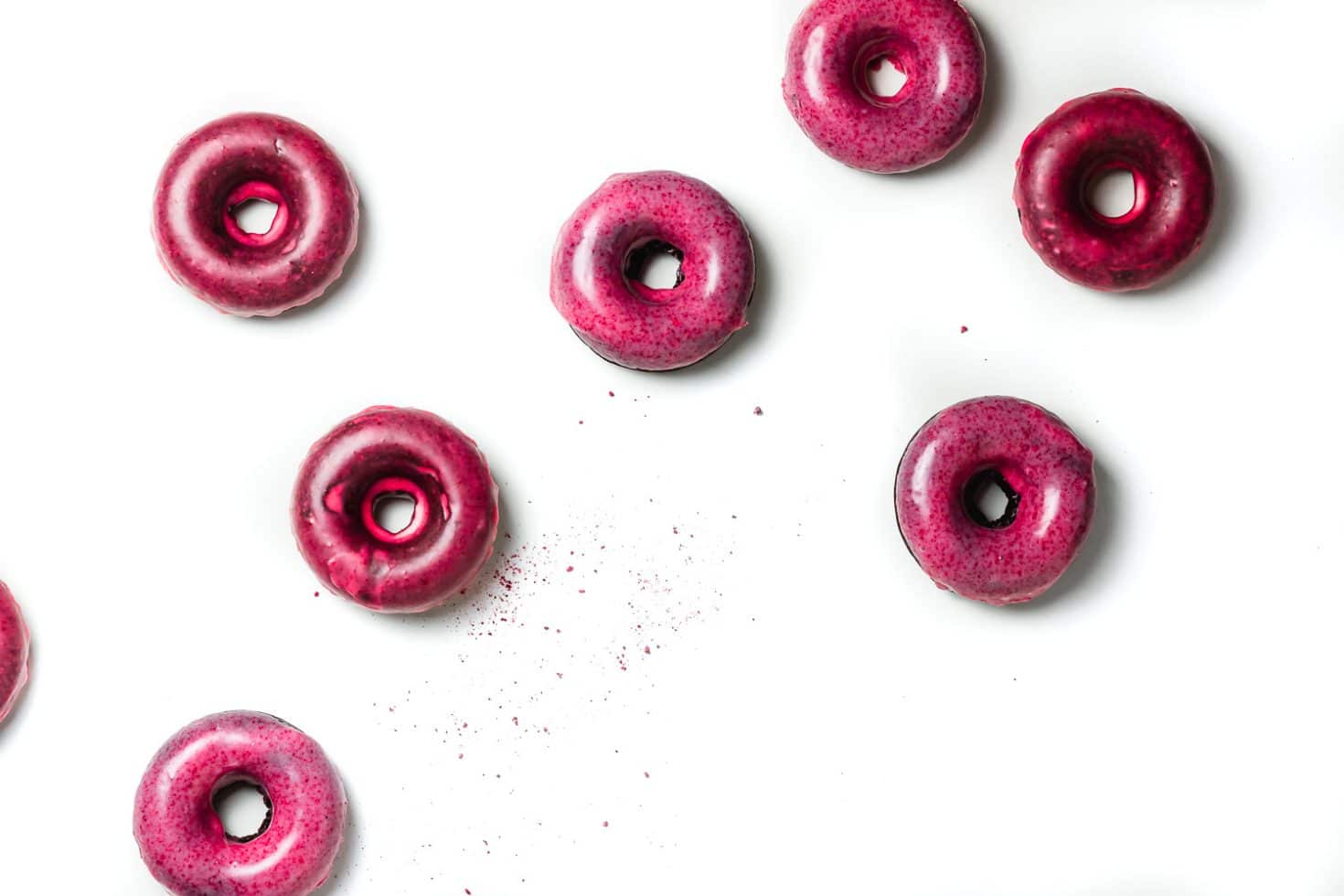 So there is my Valentine to you. It’s sweet, a little punchy, and demands to be seen (perhaps like me on certain days). I hope you love them just as you do the best people in your lives – openly and without abandon. Show them you care in whatever way speaks to you, and remember to show yourself a little love too! Happy (early) Valentine’s Day! 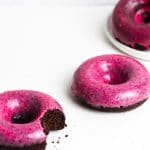 For the donuts:
Preheat your oven to 350° F and grease a donut pan with non-stick spray.

Melt butter and chocolate together in the microwave (or over a double boiler). This takes me about 1 minute, stopping to stir at the 30 second mark. Stir to combine completely and set aside to cool for five minutes.

In a large bowl whisk together the flour, cocoa powder, baking powder, salt, and baking soda.

Pour the chocolate mixture into the dry ingredients and fold together just until no dry flour remains.

Either spoon the batter into the donut pan or transfer it to a piping or gallon zip top bag. Snip the corner off and pipe into your prepared pan – filling each about 3/4’s full.

Bake for 10 – 11 minutes, or until the donuts just barely spring back when gently pressed. Let cool in pan for two minutes before flipping donuts out onto a wire rack to finish cooling. *My donut pan only makes 6 at a time, so I piped the batter and baked twice.

For the glaze:
Grind the freeze dried raspberries in a coffee grinder, mortar and pestle, or food processor until they turn into a fine powder. You can then strain them through a fine mesh sieve if you want to get rid of the seeds, but it’s not necessary.

Combine 2 T of the raspberry dust with the powdered sugar, salt, and lemon juice. Whisk until smooth.

Drop a donut, top side down into the glaze, pick up and let the excess glaze drip off. Set back on the wire rack to let the glaze set. Repeat with all donuts.

Sifting the cocoa powder unfortunately is not optional as the stuff gets really clumpy and can effect the overall texture of the finished product.

Using a piping bag or at ziptop bag with the corner cut off to pipe the donuts into the pan is really the best way to go here as the batter is quite thick.

I found freeze dried raspberries at Wegmans, Trader Joe’s and online at Thrive Market and Amazon – where you can also find them in powdered form. But if you can’t find them, or just don’t want to use them, feel free to substitute 1 heaping tablespoon of raspberry jam for 1 tablespoon of the lemon juice. 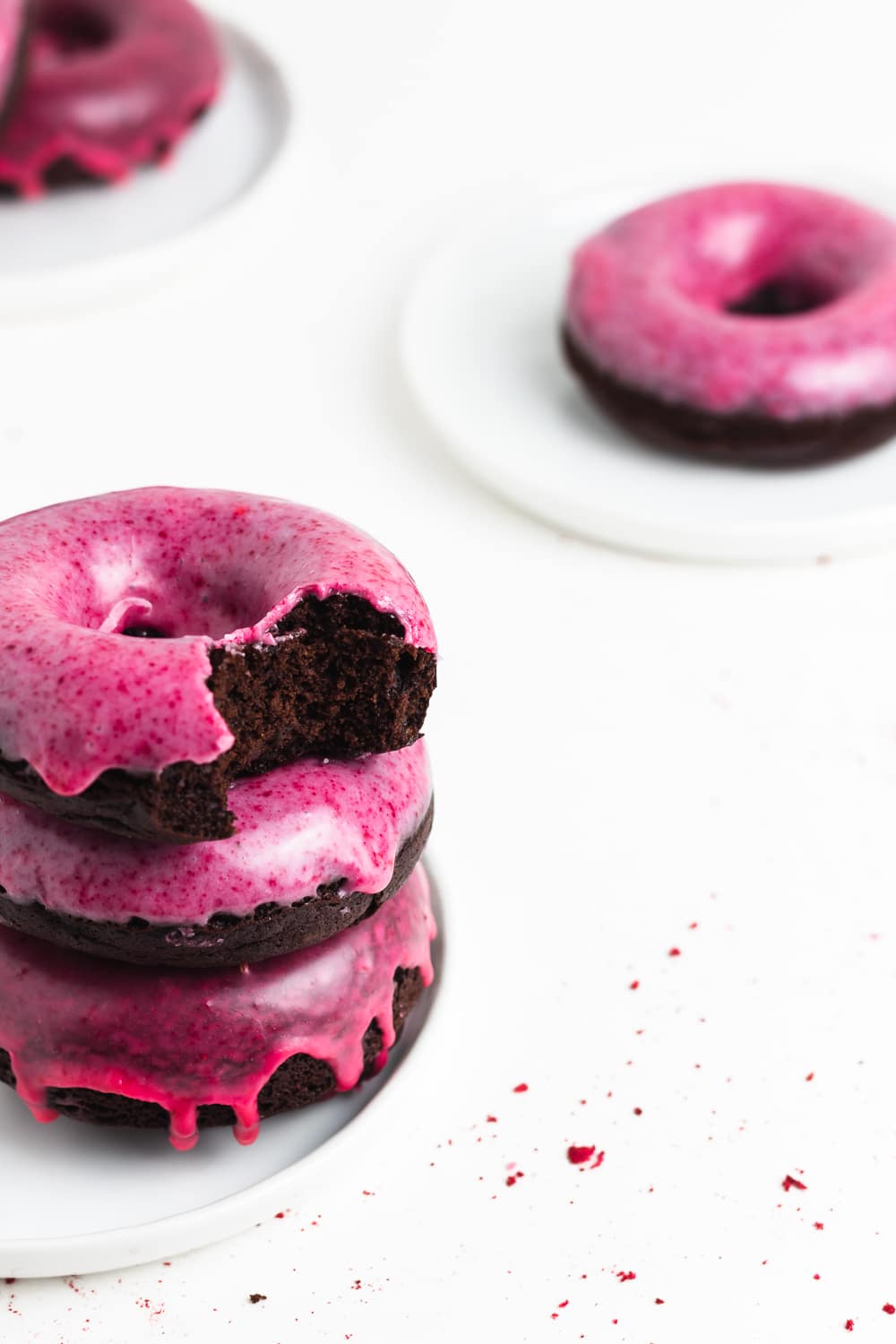