When I was growing up, spaghetti happened one of two ways. Number one, and most frequent was a jar of Prego (never Ragu) over Mueller’s thin spaghetti, with a thick blanket of shredded cheddar cheese (the thick, blocky, orange stuff). The second iteration was what we called our special sauce. It involved ground beef, tomato paste and a LOT of ketchup. I loved that stuff, but imagine it wouldn’t hold up so well now.  My spaghetti tastes have evolved over the years, but the feeling I’m chasing remains the same – pure and utter comfort. Sitting down to a bowl of noodles, even in a fancy restaurant, evokes a sense of warmth and familiarity that we can all relate to.  Maybe it’s ramen, or pho or ravioli for you. For me it’s noodles with meat sauce, or to dress it up a bit – spaghetti Bolognese. 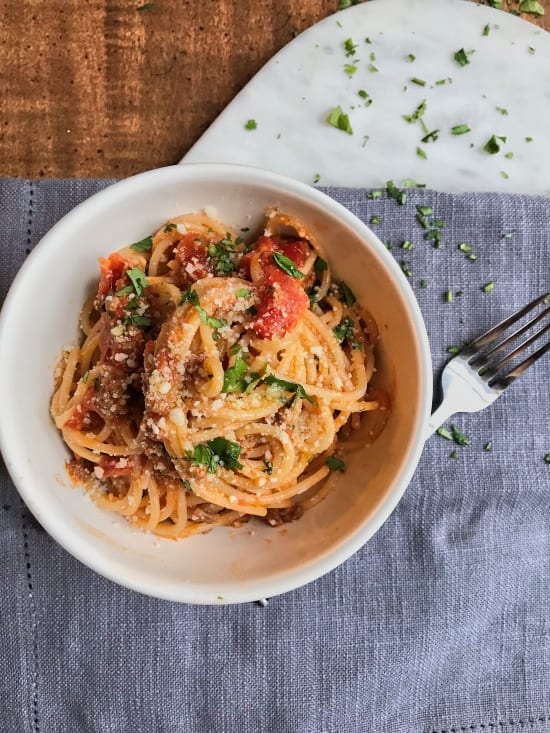 Bolognese is a meat-based sauce originating in Bologna, Italy, sometime in the 1800’s.  Since then, many versions have been adapted, tweaked, argued over and most importantly eaten and enjoyed.  As a Korean child adopted by Caucasian parents who fed me copious amounts of Prego and Cool Whip (not at the same time, thank god), I don’t pretend to be any kind of authority on authentic, Italian cuisine. Hell, it’s not even supposed to be served with spaghetti, but rather a wide, flat noodle that’s much harder to pronounce – like tagliatelle or pappardelle. But what I can do is speak to my own experiences, whims, and desires – and that seems authentic enough for me.

I love so much about this recipe – the way it makes me feel when I’m making it (like a G-D Italian grandma), the out-of-this-world smell it imparts upon your kitchen, how none of the ingredients are fussy or difficult to find, and most of all the way it tastes. It’s like a warm, meaty hug – that sounds weird, but trust me, it’s great. It does take time, but it’s well worth the effort – especially because most of it is just being around to check on the pot every so often and then taking a heap of compliments afterwards.

So, here is my authentically inauthentic take on Bolognese. I hope you make it some lazy Sunday in the near future and that it brings you comfort and warmth and satisfaction. 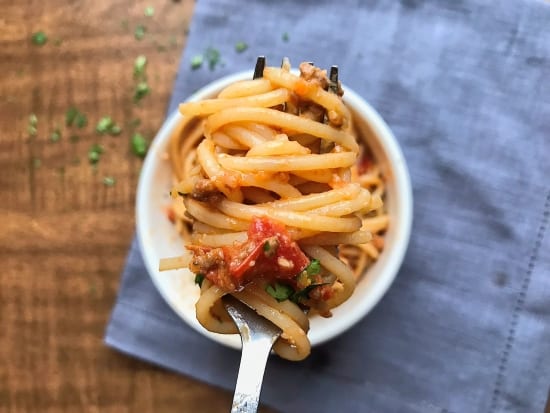 This is my take on many versions of Bolognese that I’ve tried over the years. I can credit parts of it to Anne Burrell, Marcella Hazan, America’s Test Kitchen, and probably a few others, but after many tries, this is what I like. Many people argue over the authenticity of Bolognese. Milk or no milk, red or white wine, tomatoes or none, so I can imagine there are things in this recipe that may make some people balk (re: bacon). But, unfortunately you can’t please everyone. What I like about my version is that the ingredients are simple, humble, and easy to procure. You just need time to bring them all together. *Also, you don’t have to use a food processor, just chop everything really small.
By: ♥ Jo

Step 1
In a food processor, pulse bacon until it forms a paste. Combine the bacon and 1 tbsp olive oil in a dutch oven or large pot over medium heat. Sauté until light golden brown – about 5 to 7 minutes.
Step 2
Meanwhile, pulse carrot, onion and garlic in food processor (no need to clean the bowl) until you have a pretty fine vegetable pulp.
Step 3
After bacon has browned, add the processed vegetable mixture and ½ teaspoon of kosher salt. Sauté, stirring occasionally for 7 to 9 minutes. The vegetables will brown a little, but mostly just lose moisture.
Step 4
Add ground beef and break up with a wooden spoon. Lightly brown meat – 5 to 7 minutes.
Step 5
Add sherry and simmer for 5 to 7 minutes or until pan is mostly dry (it will still be very moist, but when you run your spoon across the bottom you’ll be able to see the surface of the pan.
Step 6
Add oregano, chili flakes and tomato paste, stir to combine and cook for 2 to 3 minutes.
Step 7
Add milk and simmer for 10 minutes or until pan is mostly dry (same as with the sherry).
Step 8
Pour tomatoes with juice into a large bowl and crush with your hands to get a rough, uneven texture (I put the bowl in the sink when I do this, to avoid any juice spurting disasters).
Step 9
Add tomatoes and their juice, bay leaves and 1 cup of water. Stir to combine.
Step 10
Bring up to the boil and then reduce heat to a slow simmer.
Step 11
Partially cover and simmer for three hours, stirring occasionally. When the sauce gets thick, thin it out with ½ – 1 cup of water, scraping down the sides of the pot with each addition (I did this 3 times over the first 2.5 hours of simmering – the idea being to keep the consistency like a thicker soup until the last 30 minutes of simmering, at which point you can stop adding water, and let it thicken up a bit more).
Step 12
At the end of three hours, add vinegar, remove lid and keep simmering while you boil the pasta.
Step 13
Bring a large pot of water to a rolling boil. Heavily salt the water (it should taste like the sea).
Step 14
Drop the pasta into the boiling water and cook to just shy of how you’d like it, or 2 minutes short of the package directions.
Step 15
Reserve 1 cup of the pasta water and set aside.
Step 16
Drain pasta and add it directly to the sauce along with the butter, grated cheese and ½ cup of the reserved pasta water.
Step 17
Stir and toss the pasta vigorously with the sauce for about 5 minutes, or until the pasta is cooked through. If it looks dry, add a little more pasta water and continue tossing.
Step 18
Taste and season with salt if needed (mine didn’t).
Step 19
Add chopped herbs and toss to combine.
Step 20
Serve with extra cheese and a drizzle of olive oil. 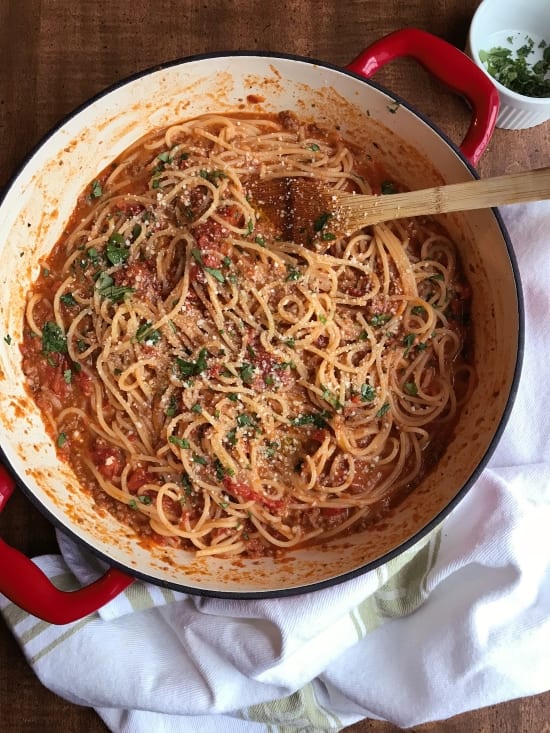 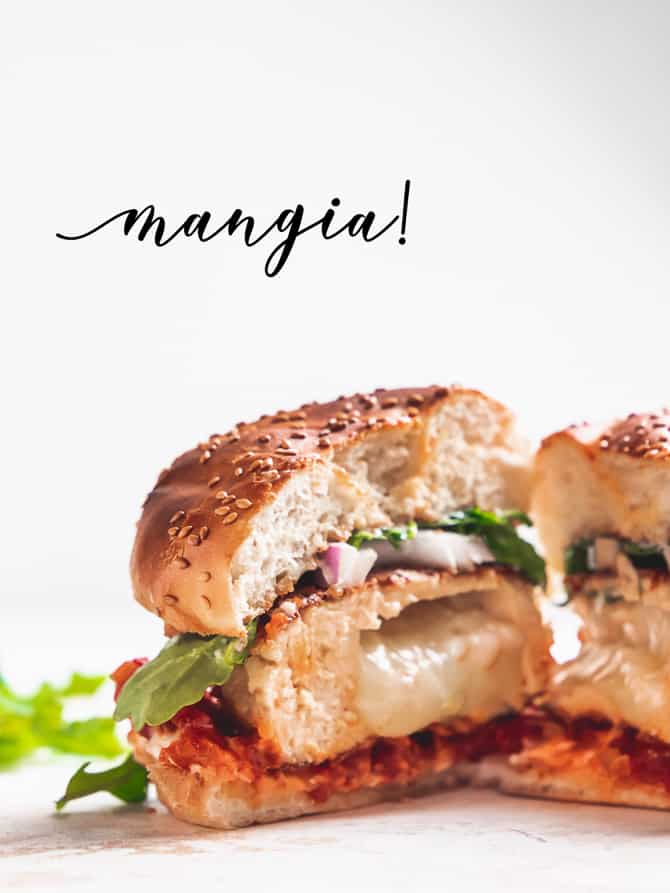