So I work from home, which means that waffle Wednesday is something that is reasonable for me to accomplish but I get that most of you would not sacrifice an extra hour of sleep just to whip up a batch of waffles before starting your workday – totally understandable. But #wafflesaturday just doesn’t have the same ring, so I’m taking some poetic license here.

Even if you don’t want to make these waffles on a Wednesday, please keep them in mind for the weekend, because they are truly worth the wait. I wanted to take all of the things I loved about a warm bowl of oatmeal, and translate that into my favorite breakfast treat – the waffle! Often times I feel like waffles are really just vehicles for butter and syrup. I’m not mad about that, but I figured if we’re going to gild the lily, then why not make the lily better to begin with. 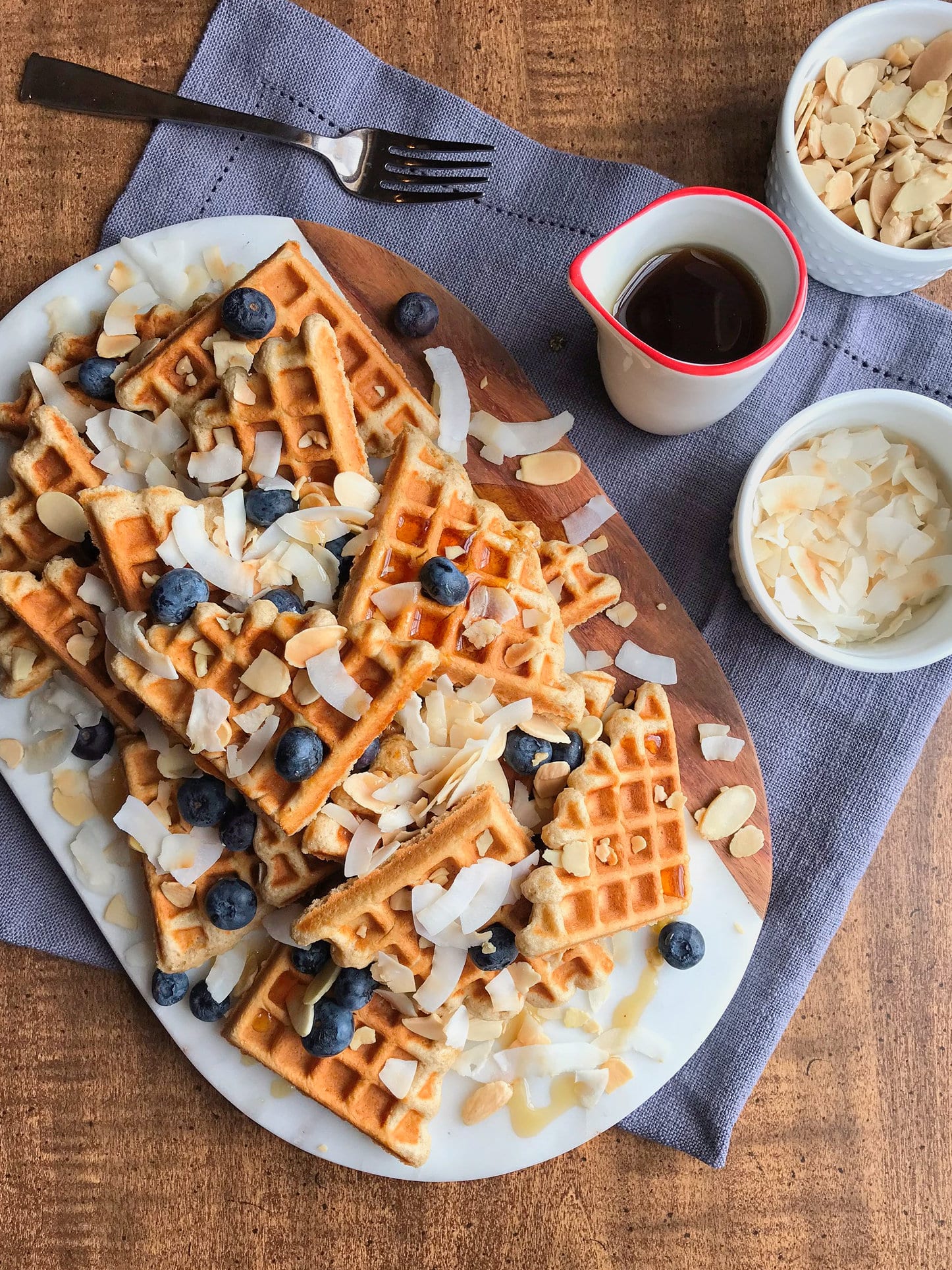 Toasting the oats and browning the butter along with a healthy dose of ground cinnamon and sticky brown sugar make these waffles something really special. They are hearty and delicious all on their own, but are obviously improved by all the same additions that you might add to a piping-hot bowl of oatmeal. Today I’m feeling blueberries, toasted almonds, coconut, and maple syrup, but tomorrow maybe I’ll pile them high with peanut butter, banana slices, and chopped pecans. Yes, I sometimes eat waffles two days in a row – don’t judge. I have also been known to eat them with ice cream – talk about lily gilding.

These are like a warm, comforting bowl of oatmeal but in waffle form. The extra steps of toasting the oats and browning the butter are so worth the depth of flavor they bring to the finished product. You can use regular milk instead of buttermilk for this if you want, but I do like the slight tang it adds. Quick tip: you can make your own buttermilk by adding a tablespoon of lemon juice or white vinegar to one cup of regular milk – I do this a lot. This batter also makes fantastic pancakes, but waffles usually win out in my house.

In a dry skillet over medium heat toast the oats, stirring frequently for about five minutes or until they take on a light golden color and smell toasty. Transfer the oats to the jar of a blender and blend into a powder. Set aside.

In the same skillet melt the butter until it foams. Then watch it carefully for the next 4-6 minutes, swirling the pan constantly. The foaming will subside and the butter will begin to brown and smell nutty. This happens fast, so once you see the butter turn a deep, golden brown, remove it from the heat and scrape it (browned bits and all) into a bowl and set aside.

Using a stand or handheld mixer and a very clean bowl, beat the egg whites until soft peaks form.

Pour the egg yolk/buttermilk mixture into the dry ingredients and stir until just combined.

Carefully fold the egg whites in, until there are no more white streaks.

Preheat and grease your waffle iron with non-stick spray or butter. Use anywhere from ½ to 1 cup of batter per waffle, depending on the size and shape of your waffle iron. I am to fill the iron about 2/3rd’s full.

When the waffle is done, transfer to a wire rack in a 250° F oven to keep warm while you cook the rest of the batter.

Top with fruit, toasted nuts, syrup and anything else you might ordinarily put on your oatmeal! 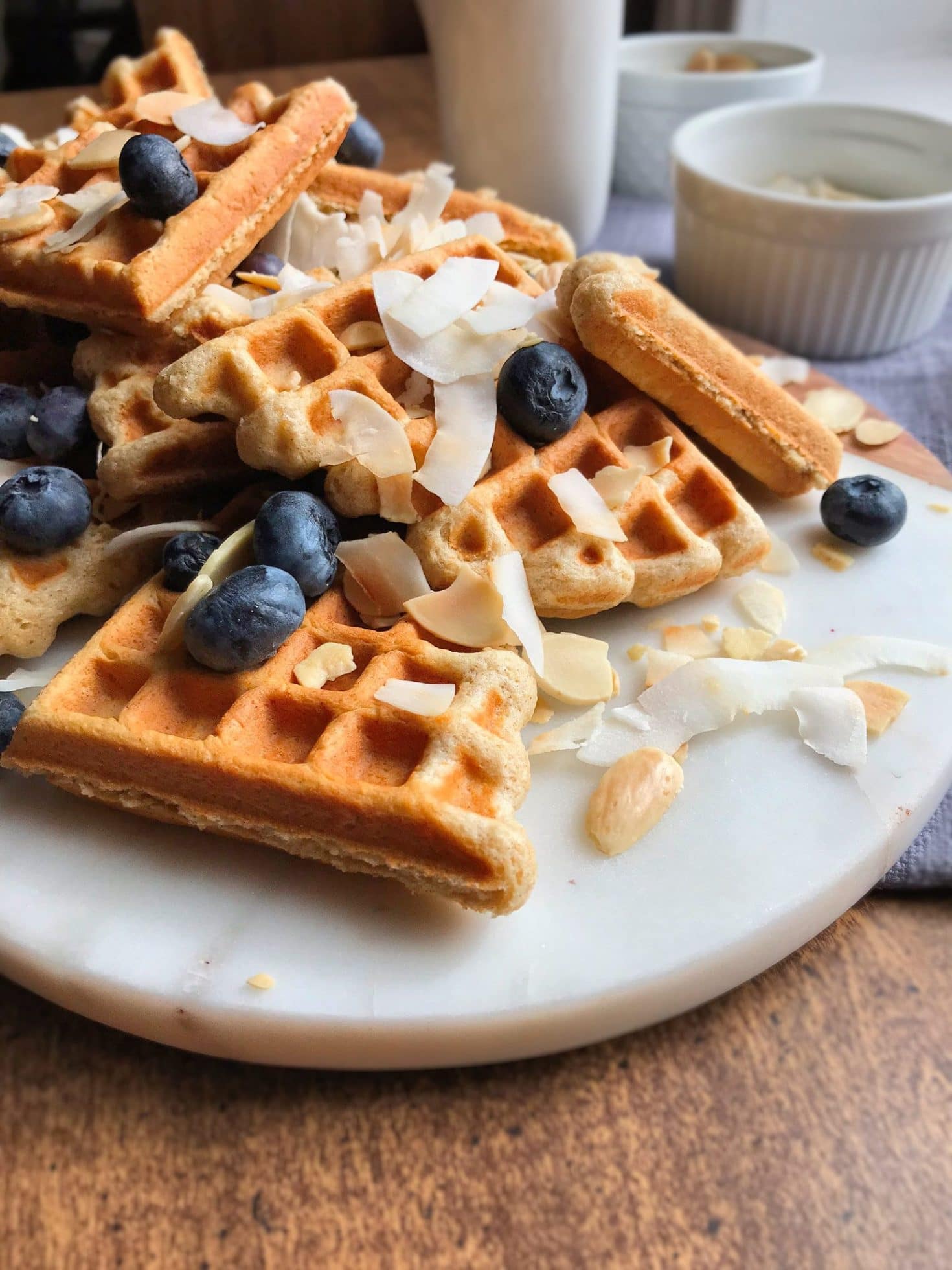