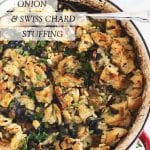 Thanksgiving is my favorite holiday. It used to be neck and neck with Christmas. But T-day officially took the lead as I grew into my 30’s and realized that Thanksgiving has all of the indulgence, community, and warm fuzzy feelings of Christmas without all the tracking numbers, scotch tape, and gift-giving anxiety. It’s food, fun, and most importantly – stuffing. 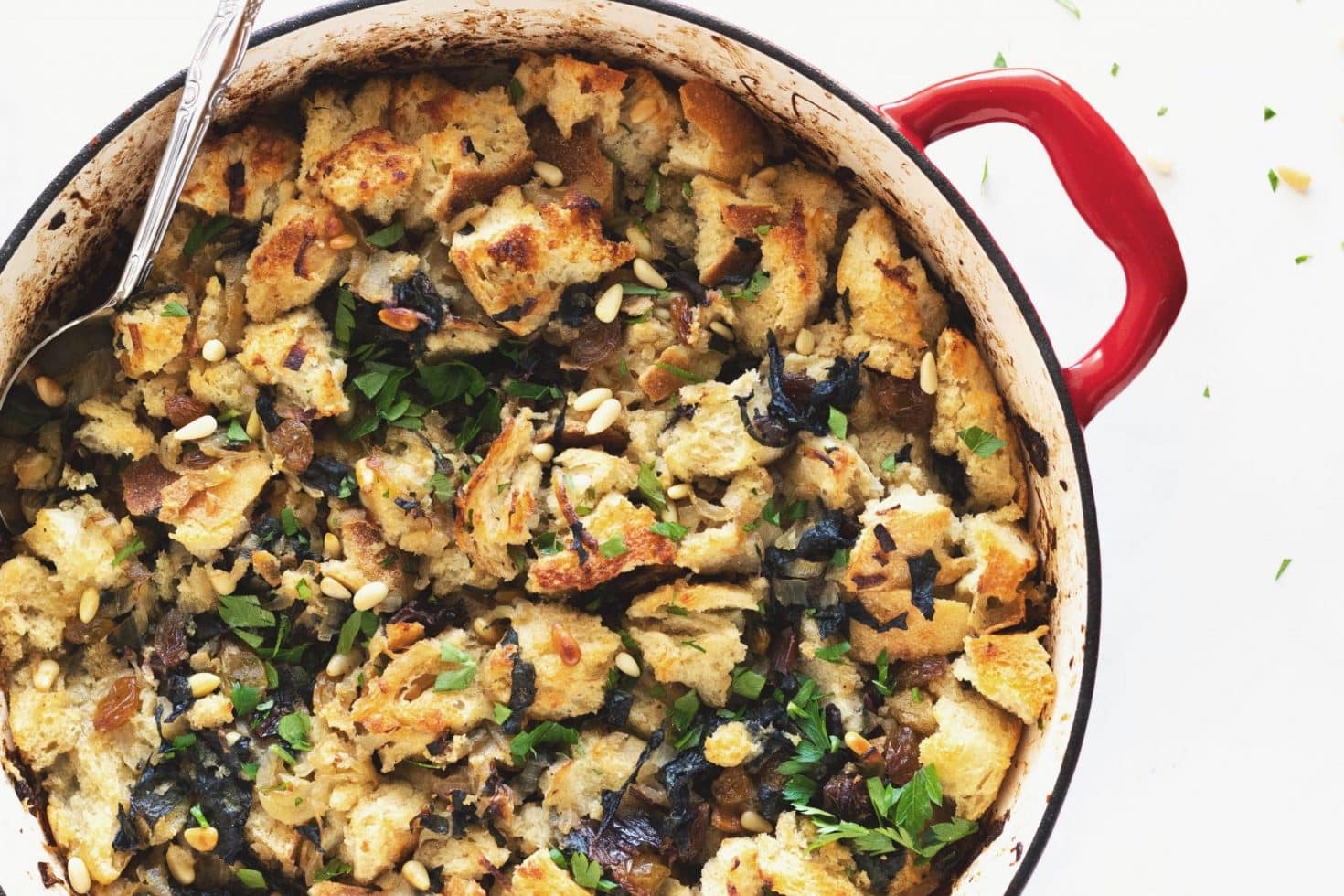 If Thanksgiving is my favorite holiday then stuffing is BY FAR my favorite Thanksgiving food. Don’t get me wrong – I love all the traditional Thanksgiving grub, but the stuffing, man. It calls to me. Its butter swathed crispy edges whisper sweet and savory nothings into my eager little ears. If I could be alone with any side dish – this would be it. But I bet some of you are shaking your heads. No, not those who stand loyally by their mashed potatoes (also delicious), but the ones who look at this picture and don’t see stuffing. I’m talking of course about the dressing eaters.

Dressing versus Stuffing – The Great Debate 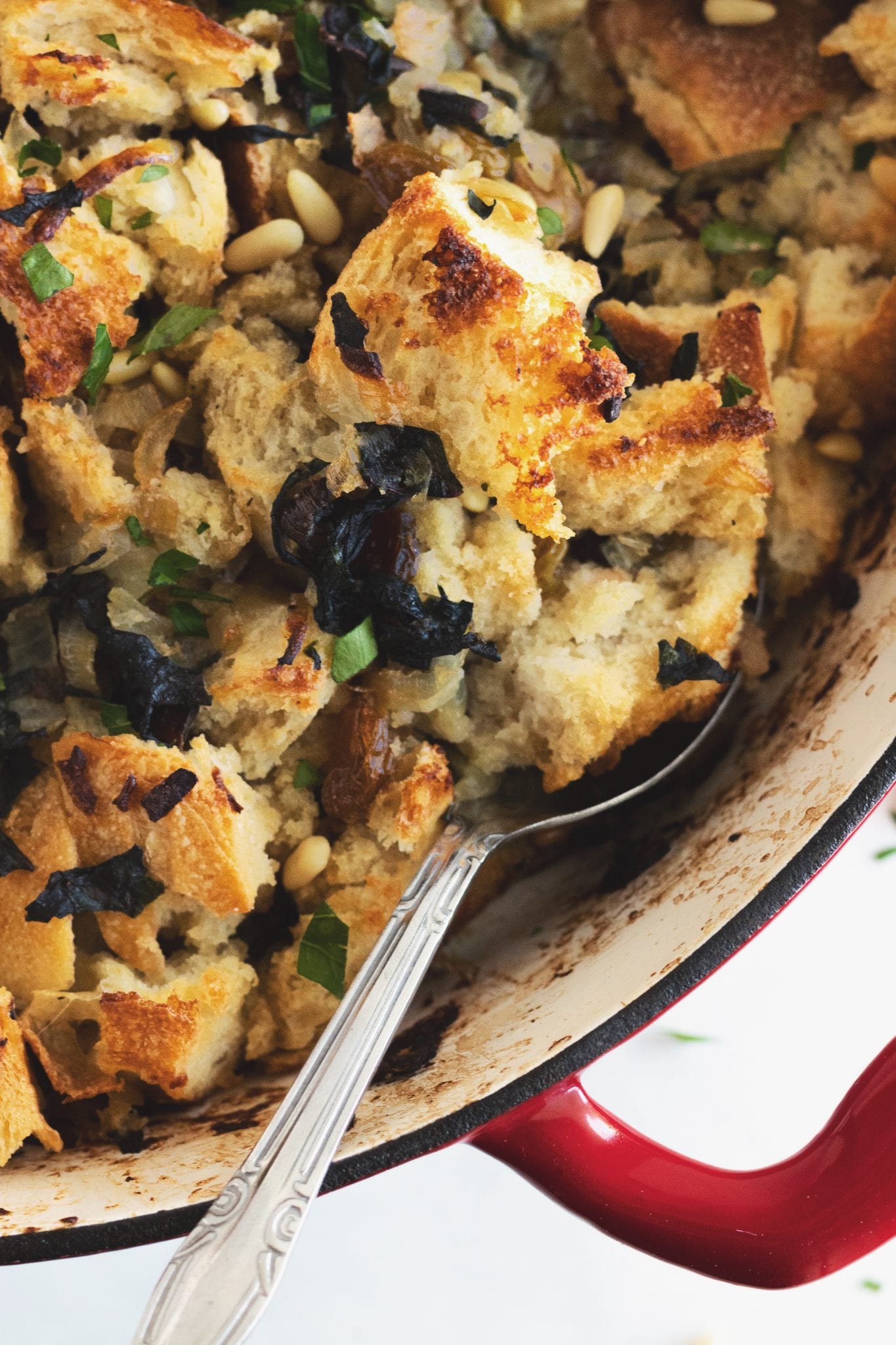 So if you want to get technical, I believe the distinction between stuffing and dressing is that stuffing is usually, well…stuffed in to something else, while dressing is baked along side. Over the years I have decided that stuffing anything larger than a bell pepper is just not for me. And in the case of a turkey, it’s honestly too messy and too dangerous (food safety wise) to be worth the measly amount of stuffing it produces. Plus once that stuffing comes out it looks kind of gross (you would be too if you just spent three plus hours shoved up the butt of a bird). So there you have it. I’m obviously on team Dressing.

But why then do I insist on calling it stuffing?

Maybe it’s because I like the whole Norman Rockwell ideal of the stuffing that’s actually inside the bird. It’s iconic. It’s the way they used to do it*, and for some reason baking the “dressing” along side the bird seems like admitting defeat. I know that what I make each year, and even what I ate growing up is technically “dressing”, but it said stuffing on the box and we called it stuffing and because I am a creature of habit and have fond memories of the Thanksgiving’s of my childhood I am going to continue living this lie and stuffing it shall ALWAYS BE!

Ok, enough with the dramatics. You can call it whatever you’d like and honestly you can make it however you want – inside the bird, outside the bird, even from a box (the nostalgic appeal is real folks). But if you’re looking for a delicious, new take on an old classic, I’ve got you covered.

Caramelized Onion and Swiss Chard Stuffing (a misnomer, but who cares?) 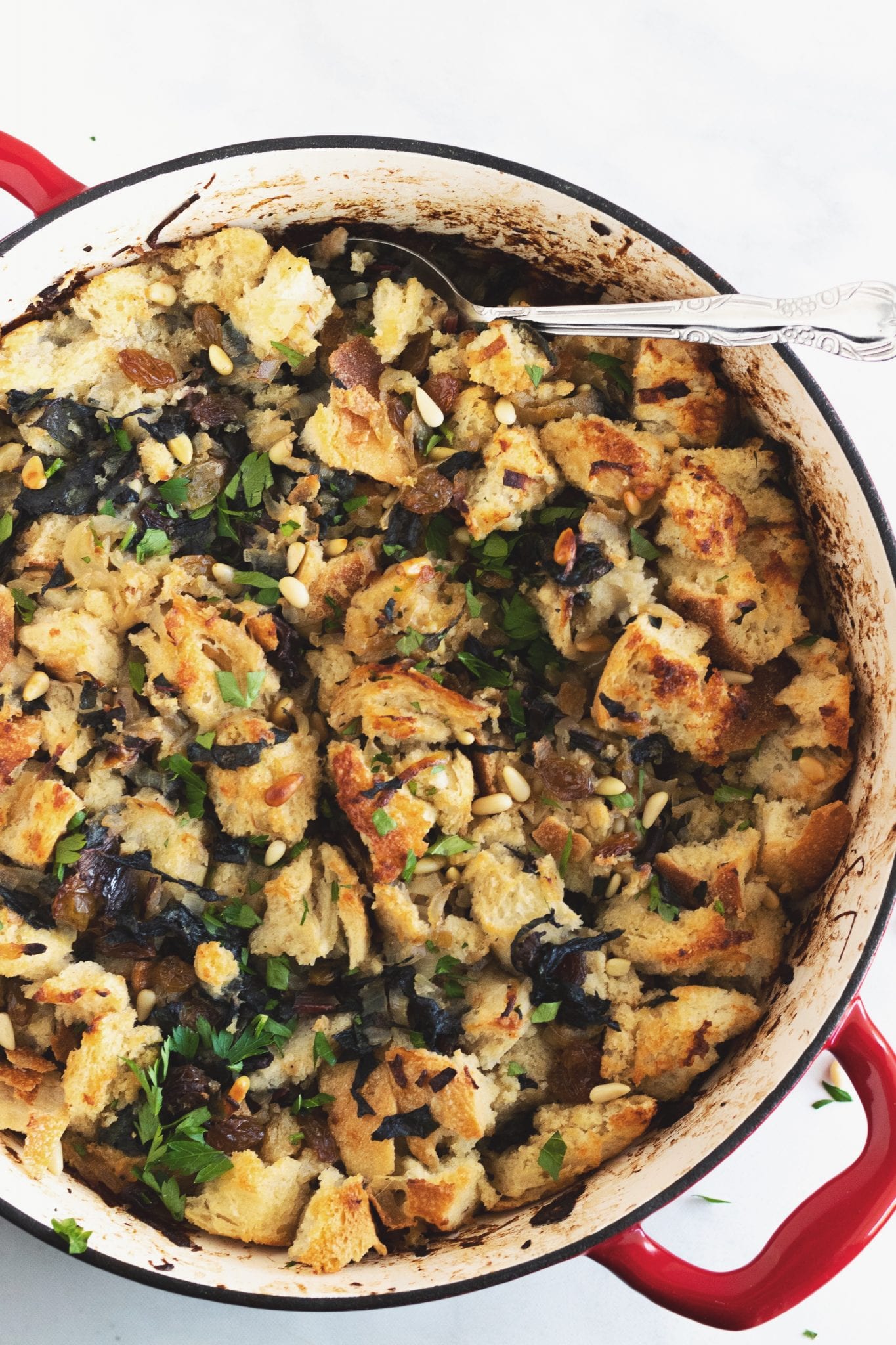 Yes this stuffing is not reallllllly stuffing, but the takeaway here should not be how inaccurately named it is, but instead the wealth of flavor to be had between pockets of sweet caramelized onions, strands of earthy sautéed swiss chard, and the buttery and tart hints of pine nuts and golden raisins littered throughout this pan of carby goodness.

Some tips for stuffing success:

And with that I think it’s official – we have entered into the HOLIDAYS. I hope for your sake and mine that local stores hold off on rocking around the clock for just a week or two more, and let Thanksgiving have some time to shine…but I’m not holding my breath.

*I honestly don’t know if that’s how “they” used to do it, but it sounds old timey and I’m going with it! Please feel free to sharp shoot me in the comments with any of your stuffing/dressing factoids. 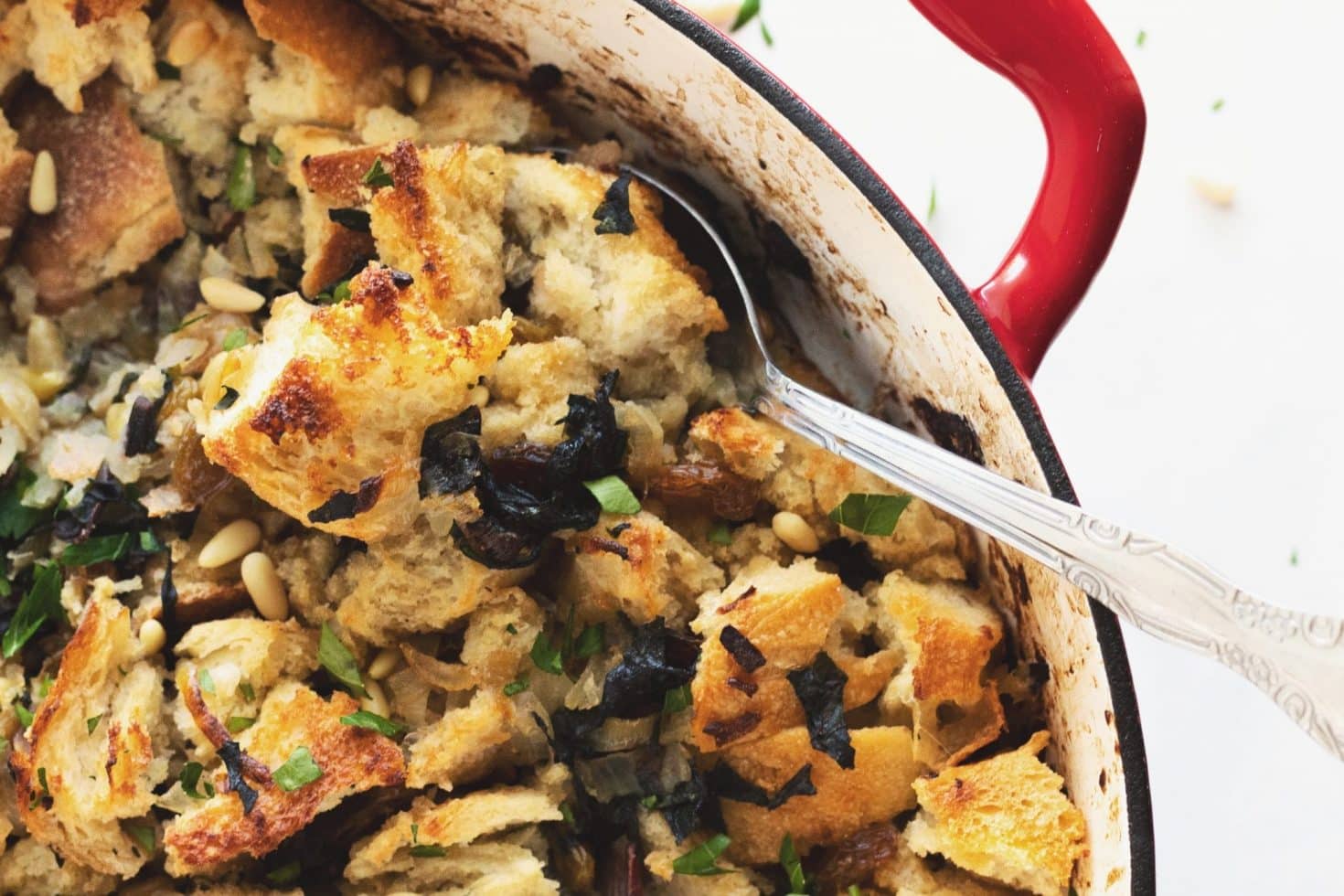 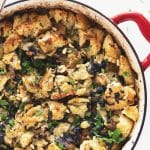 Sweet caramelized onions, earthy Swiss chard and just a bit of butter make this an indulgent, rich, and vegetarian stuffing that can be made almost entirely ahead of time and stashed in the fridge for up to two days. Do your holiday self a favor and make some room!

Spread bread cubes in an even layer on a rimmed baking sheet. Bake for 25-30 minutes or until bread is completely crisp. Remove them from the oven and set aside. Raise the oven temp to 375°F.

While bread is crisping, microwave your vegetable broth for one minute, until hot but not boiling. Add raisins and set aside.

Uncover and stir. Continue to cook the onions, stirring occasionally, until they take on a light, caramel color. This usually takes 35-45 minutes in my experience. You can speed up the process a little by adding a teaspoon of brown sugar, but I prefer the long and slow method myself.

Once your onions are beautifully caramelized, turn the heat up to medium-high and add your Swiss chard. Season with an additional ½ tsp of kosher salt and a few more grinds of black pepper. When the chard begins to wilt and the stems begin to soften slightly (after 5-7 minutes), turn off the heat and stir in the red wine vinegar.

Add your bread cubes, veggie broth, raisins, and pine nuts to the pan and GENTLY toss to combine. The bread should soak up all of the liquid – it’s ok if some bits are mushier and some bits are crunchier though.

Spread the stuffing into an even layer, but do not pack it down too aggressively. Drizzle the melted butter on top and bake for 30 minutes.

If you want to make this in advance, just assemble the stuffing, cover tightly with foil, and refrigerate for up to two days. On the day you want to bake it, preheat your oven to 375°F and bake the stuffing with the foil on for 20 minutes. Then remove the foil and bake for an additional 20 minutes. 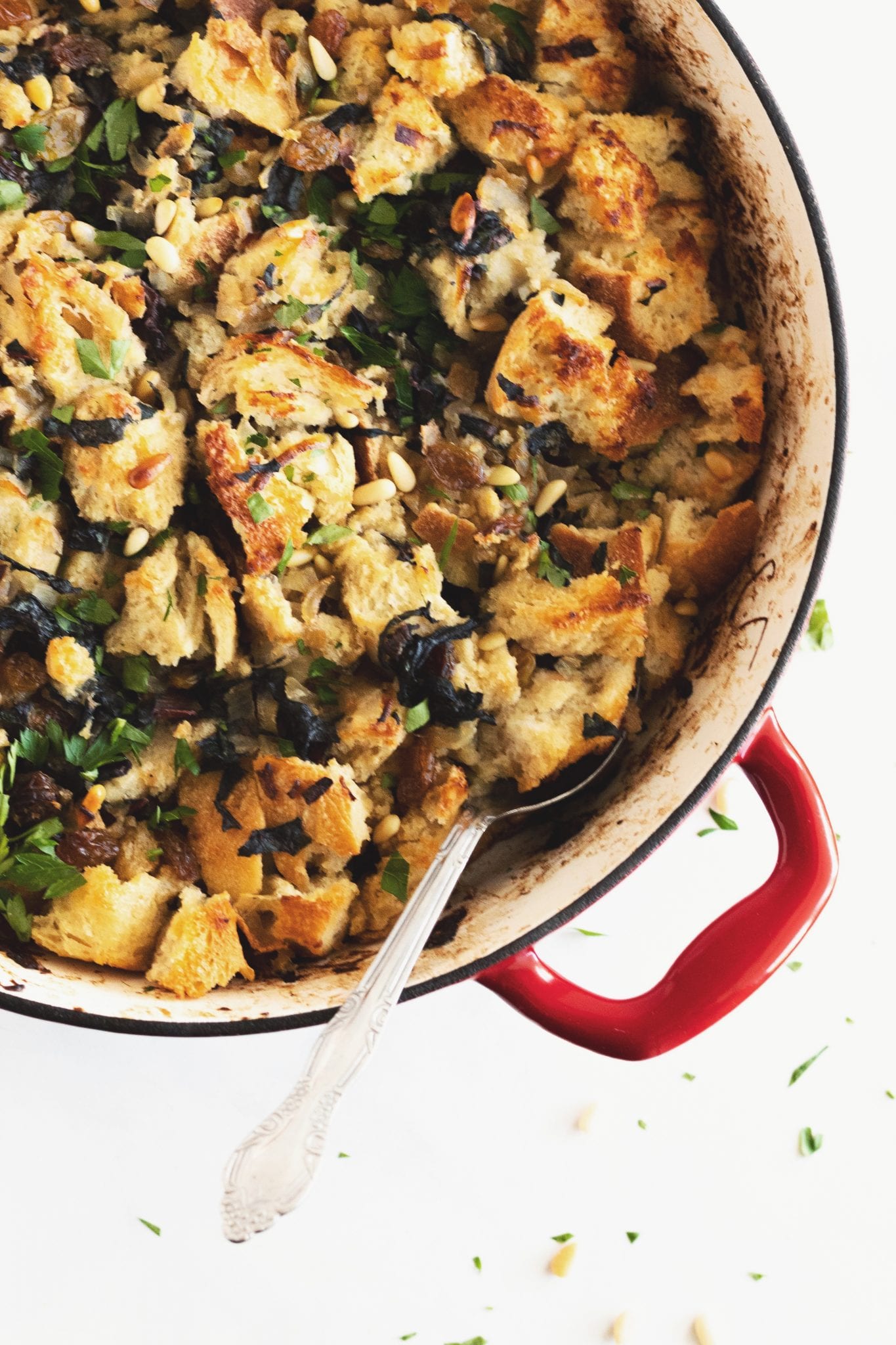 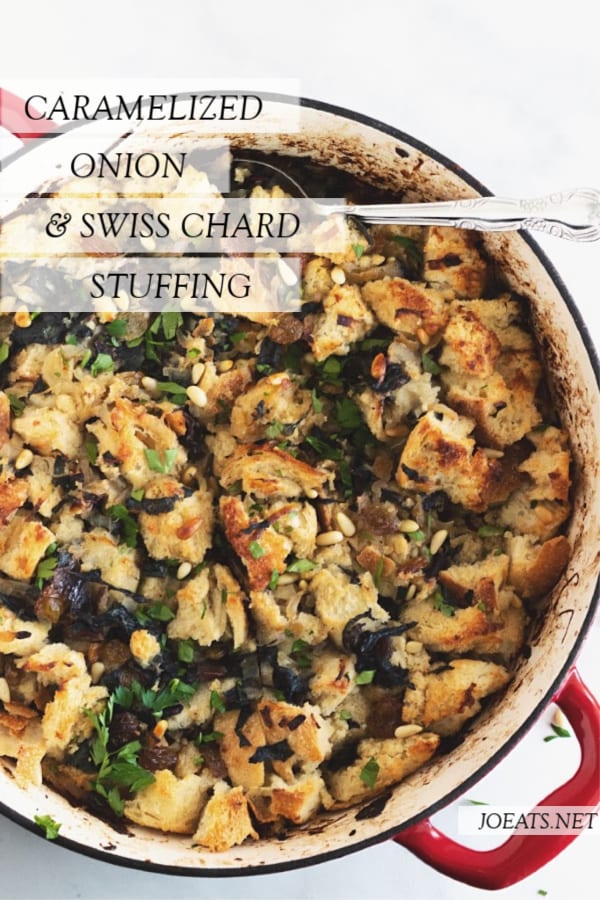