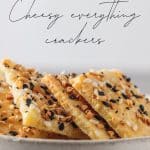 These cheesy everything crackers are the snack you’ve been waiting for – trust me. They’re buttery, crunchy, savory, so cheesy, and sprinkled with that magical fairy dust that is everything bagel seasoning. 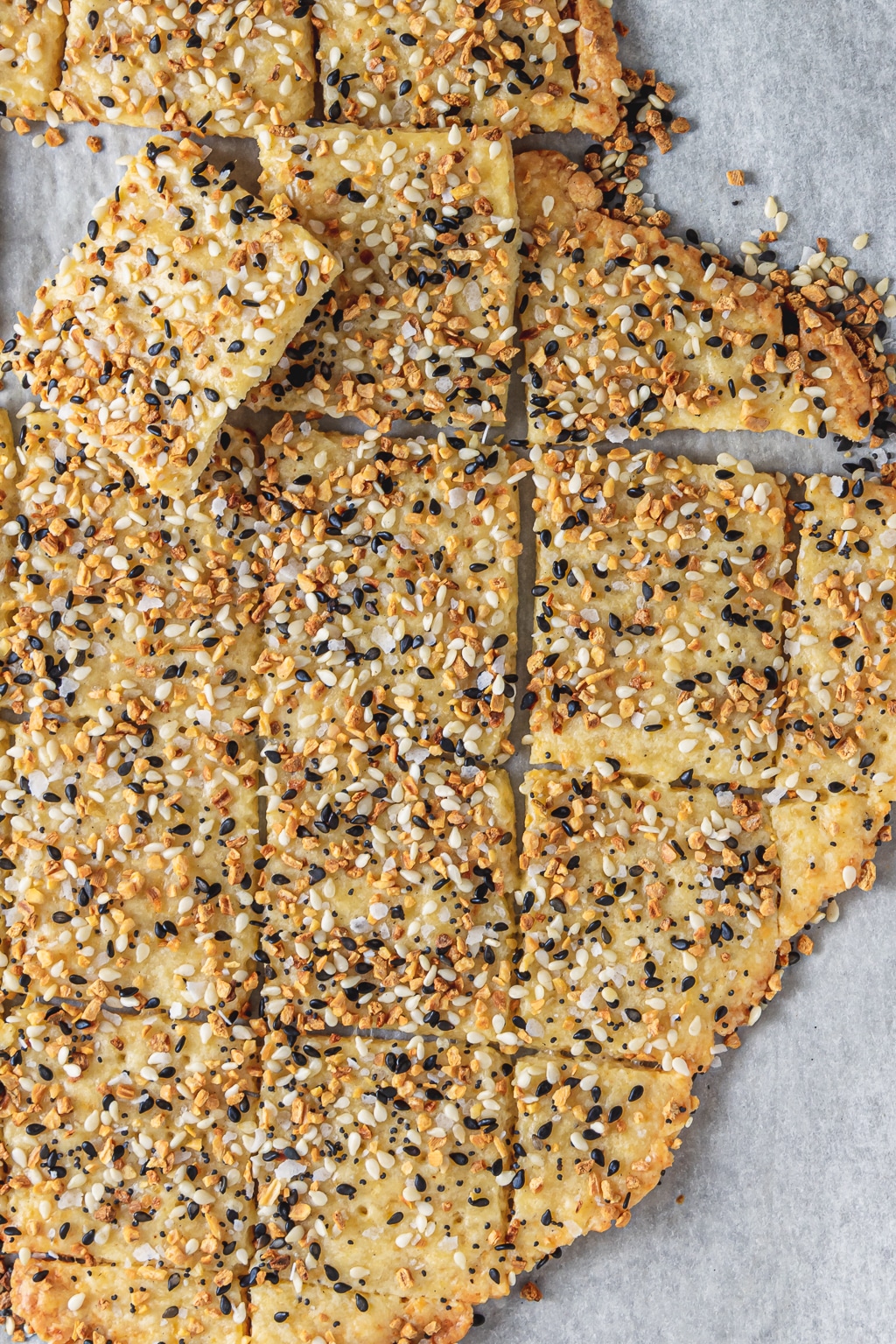 This post was originally published on June 22, 2018. It has been updated with new photos and content. Enjoy!

E and I were just discussing slogans/taglines that have fallen out of use. Included in that discussion were “It’s the ‘X’ of the future, TODAY!”, and “Say so long to whatever persnickety, household problem was being addressed by said wonder product of the new age!”, oh and of course the ubiquitous “New and Improved”. I think another trope of the 80’s and 90’s ad market, specifically in food, was the “baked right in” concept. Be it cheese, or some other flavor, or just plain, old “goodness”. If it could be baked right into the product, rather than having to be added at a later time, well that’s just common sense. 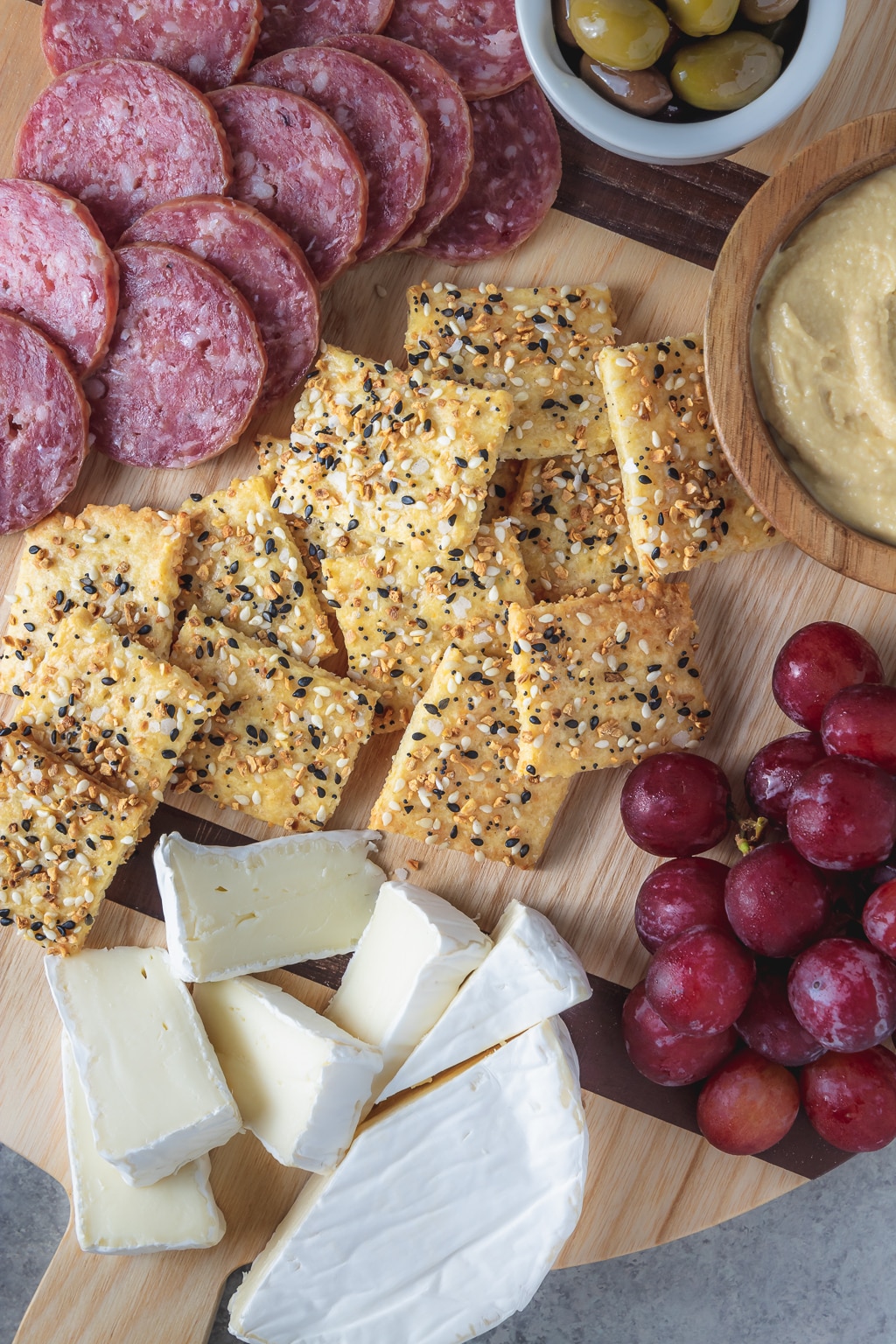 So because I am clearly a child of the 80’s/90’s I will abide by the rules of my generation and give you a cracker where the cheese is already in there. The difference with these though is they are homemade, so no weird dyes, preservatives, or otherwise nasty little chemical ingredients. Also, and maybe more importantly – they taste so so so so good. These crackers make a fine midday snack, but they really shine alongside a crisp glass of rosé on a summer afternoon. Oh, and they feature everything bagel spice, which as you know I hold in high esteem.

Say hello to the cracker of the future…today! Or something. 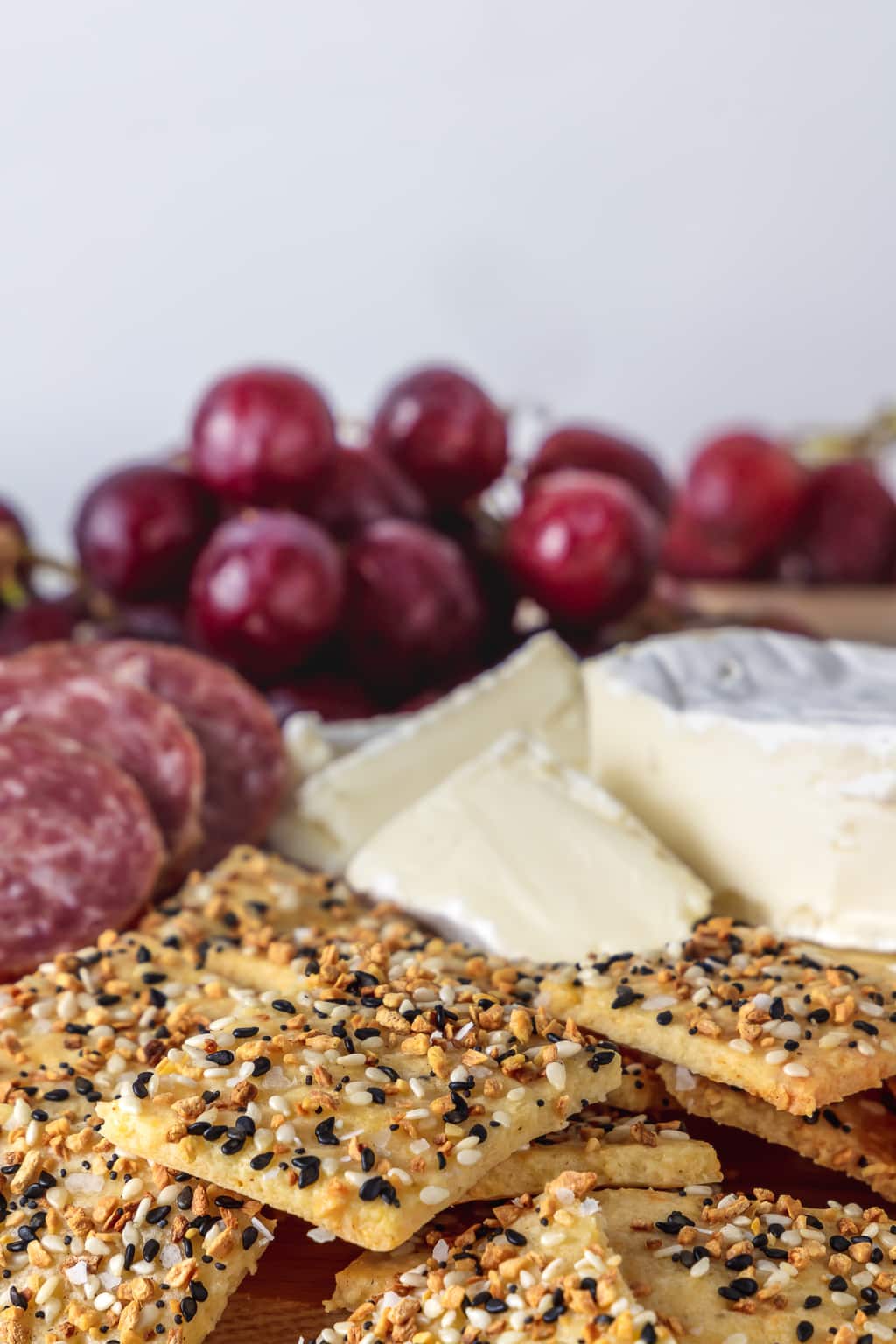 Making crackers from scratch is something that I used to think of as crazy wizard magic the likes of Hogwarts or the Tardis. But at the end of the day it’s really just whipping up a quick dough, rolling it thin, and baking it until it turns golden and crisp. Easy enough. But because we’re in the business of making food and making it well around here, let’s roll with some tips to make your cheesy cracker dreams a reality.

How to make homemade crackers

This cracker dough is kind of like a little cousin to biscuit dough, in that flour and butter are pulsed up with some seasonings and just enough liquid to bring everything together into a cohesive mixture. The difference being that instead of stamping out big, fluffy biscuits, you roll this dough out thin and bake it until it becomes golden and crispy. And while biscuits and crackers aren’t exactly identical twins, some best practices can be applied to both. 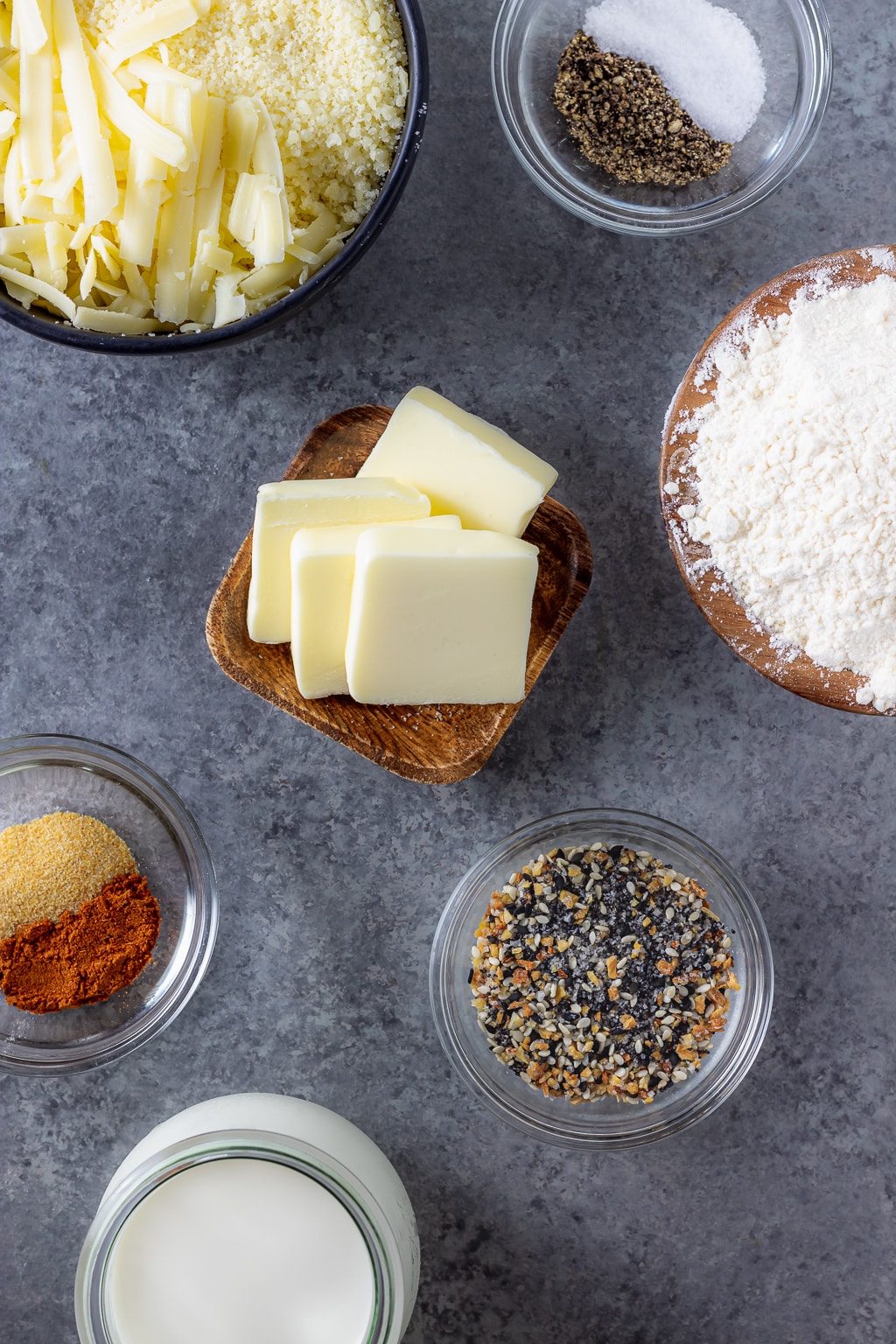 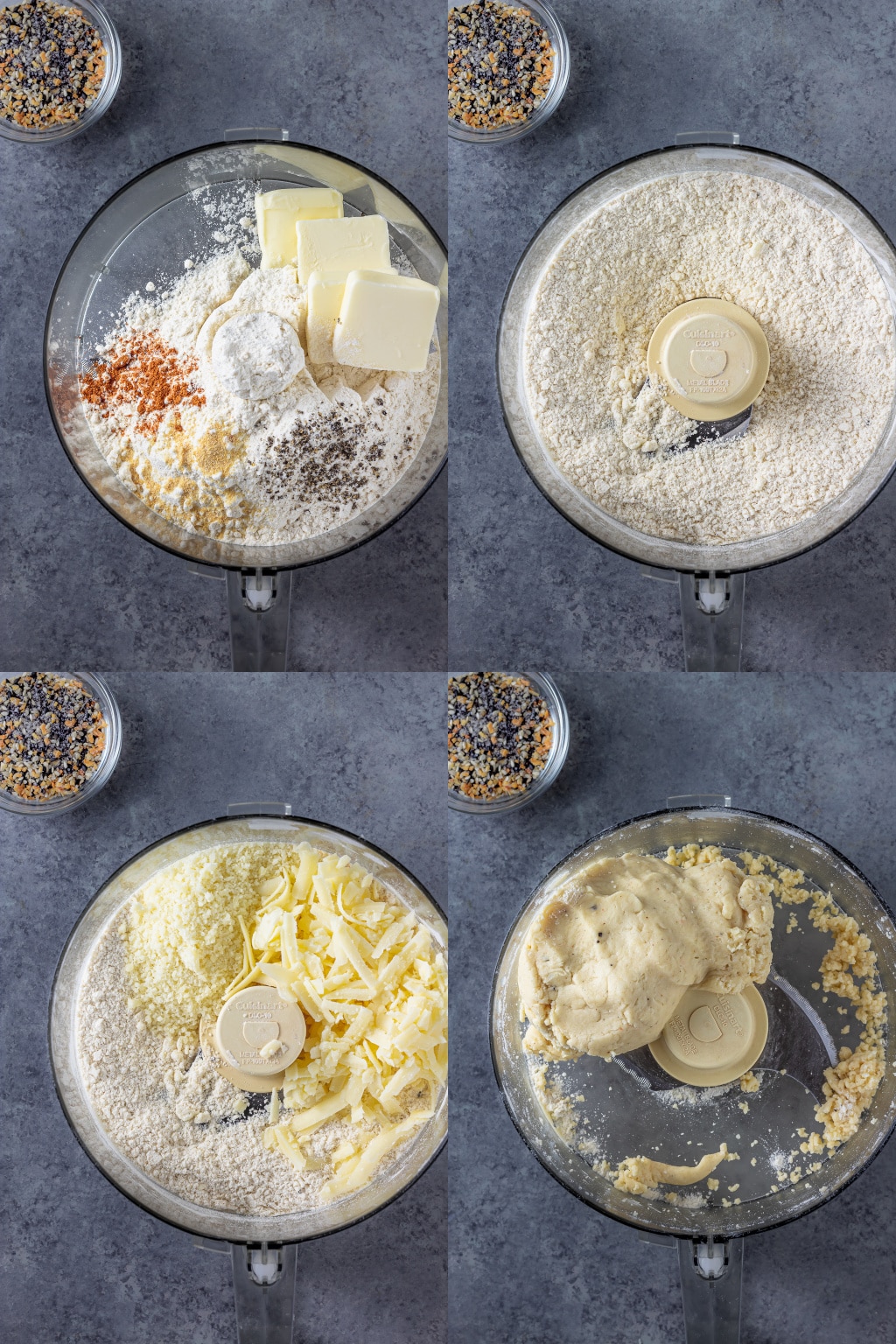 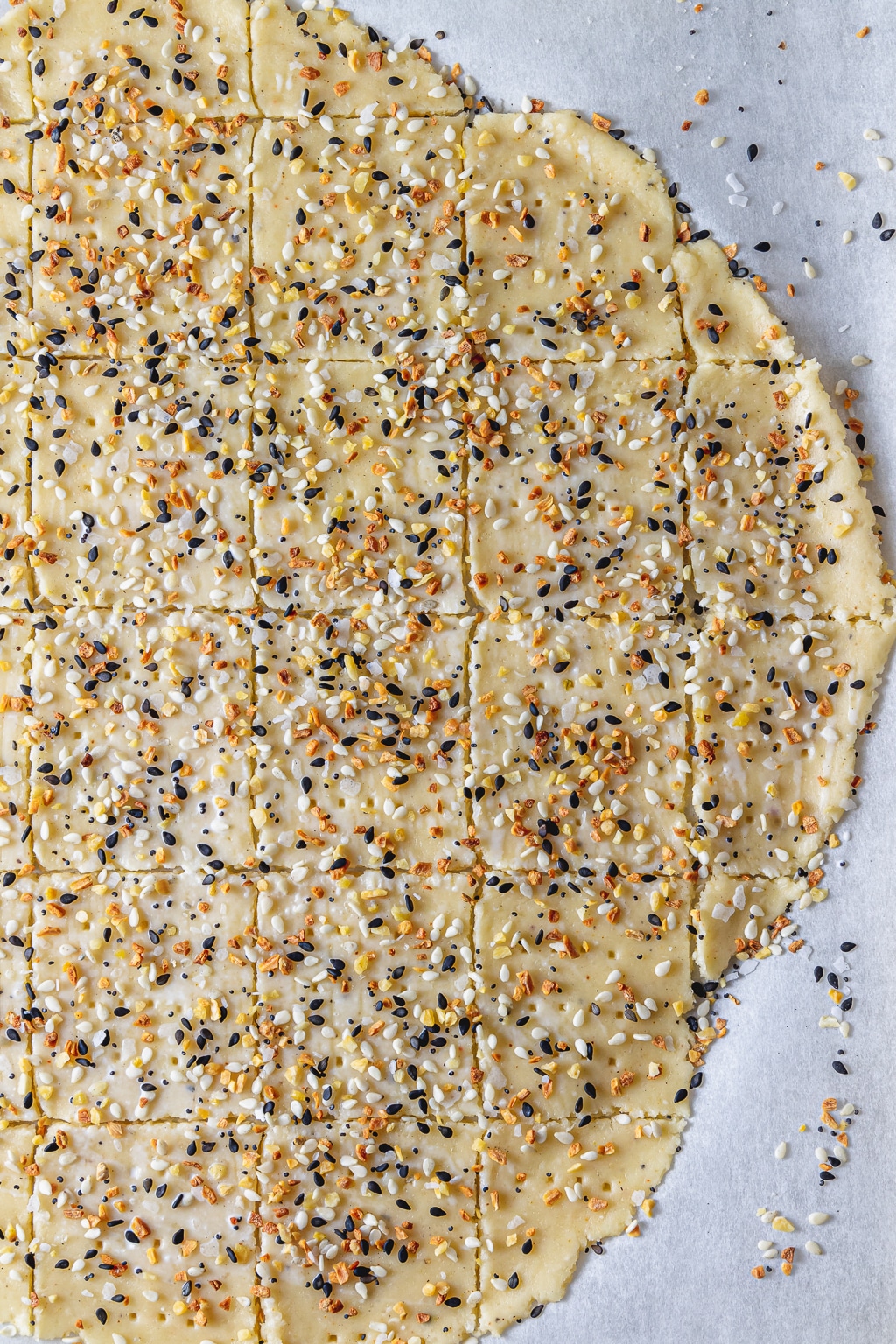 And if you need more cheese in your life: 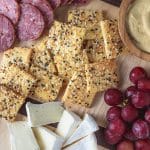 These cheesy everything crackers are literally everything you could want in a savory snack. They’re salty, crunchy, cheesy, buttery, and easy to whip up any old time!

In the bowl of a food processor, pulse together the flour, salt, pepper, garlic powder, and cayenne pepper. Add the butter and pulse 5-7 more times or until butter is incorporated into flour and no large pieces remain. It should look like coarse meal. Add the cheddar and pecorino and pulse a couple more times until combined. With the machine running, stream in 1/4 cup of the half and half until the mixture comes together in a ball. Divide the ball in half.

Take one half and roll out to 1/16th inch, between two sheets of parchment paper. Transfer dough, along with bottom piece of parchment to a rimmed baking sheet. Use a sharp knife to cut out 2×2 inch crackers and use a fork to prick each one a few times. Brush the crackers lightly with the remaining half and half and sprinkle with 1 tablespoon of the everything bagel spice. Repeat with remaining dough.

Bake on the middle rack for 20 to 25 minutes or until crackers are a light golden brown. Let them cool completely before breaking crackers apart – they will continue to crisp up as they sit. Store in an airtight container for up to 5 days.

Feel free to substitute a different cheese in for cheddar or pecorino here, but make sure to pick a relatively dry one. Parm, gruyere, or an aged gouda are all great options.

If you don’t have access to a store bought everything bagel spice, you can make your own. Here’s a great recipe.

These will be a little soft straight out of the oven, but will continue to crisp up as they cool. I prefer to let them cool directly on the pan. 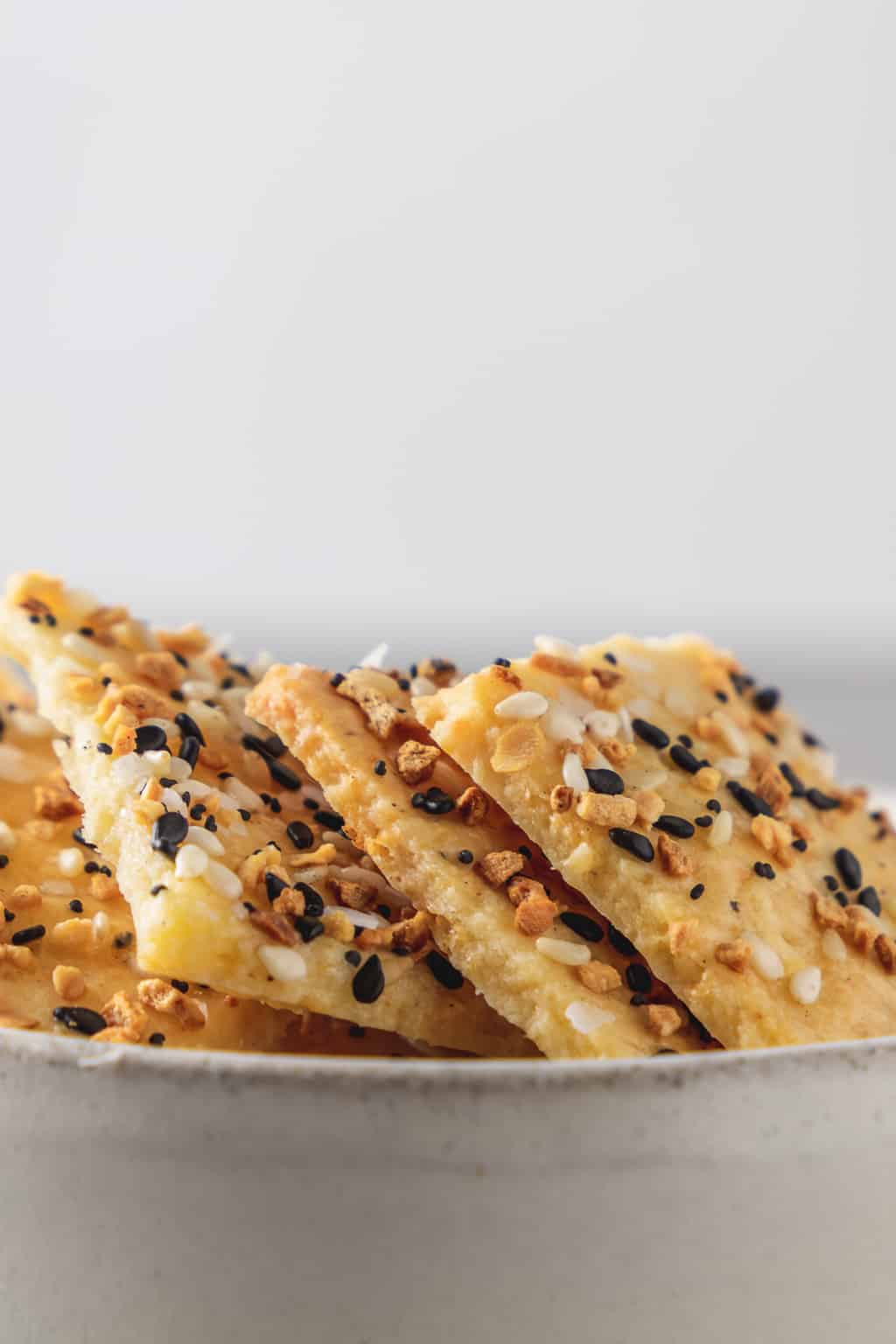