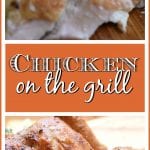 Whole grill roasted chicken is a simple recipe that delivers juicy, flavorful meat, crispy and golden skin and is all done on the grill! 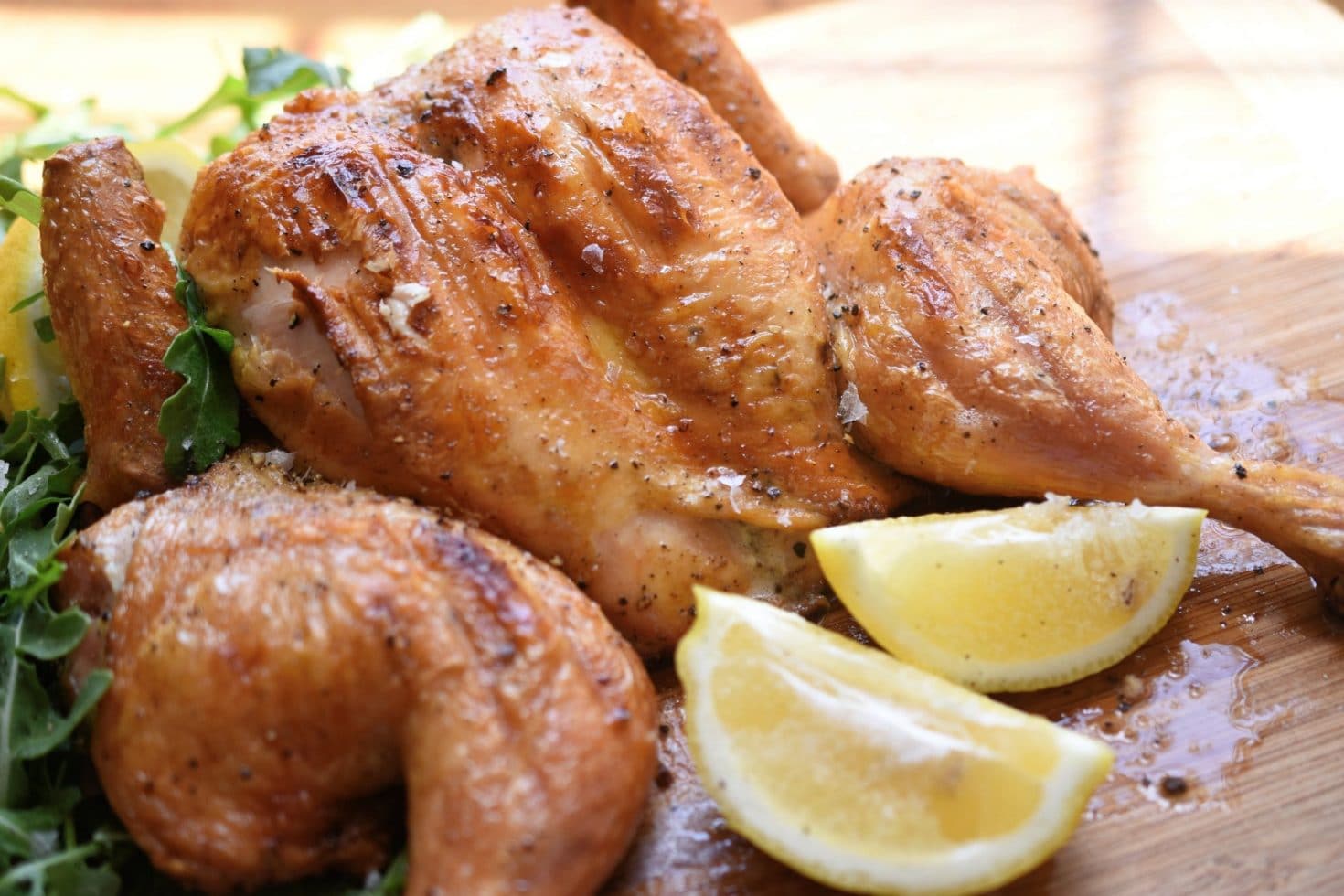 I ♥ the grill . Back when I was living in NYC, grilling was never really possible – because tiny apartments, no outdoor space, fire hazards, and other dumb stuff like that. When I came to Philly to live with Eddie, I became co-owner of our small patio space along with a standard issue charcoal grill. For a while I didn’t touch it. I made a lot of excuses that first year – it was too hot, it was too cold, it was easier to just cook inside, etc. But one day I finally put my big girl pants on and lit some charcoal. Since that day I’ve had triumphs and failures – luckily none that involved the fire department. But mostly I learned that it’s a really fun way to cook – one that involves your attention and a little patience, but not much more. Oh and a fire extinguisher – just in case. 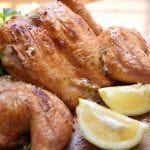 This chicken is made on the grill, but I am hesitant to call it grilled chicken. It really is more akin to the roast chicken of my dreams. It’s juicy, flavorful, and has the most gorgeously crisped skin I’ve ever seen.

Setting up your grill:
If you’re using gas, just turn it on and set two burners to medium-high and the other two you can leave off.

If you’re using charcoal, stuff the bottom of a chimney starter with 2 sheets of newspaper and fill the top with charcoal. Place the whole thing, upright, in the kettle of the grill – with the grill grates removed. Light the newspaper. The chimney will begin smoking immediately, but keep an eye on it for a least five minutes, as sometimes the paper will ignite, but not the charcoal. If this happens just stuff a little more newspaper in the bottom and relight. You can tell the charcoal is actually lit when you notice the smoking lessen but not stop completely and see it coming directly out of the top of the chimney rather than the bottom and sides. Let the charcoal burn until the top layer becomes partially gray in color. This usually takes about 20 minutes.

Carefully dump the hot coals on one half of the grill, leaving the other half empty. Place the grill grate back on and cover with the lid. Let everything heat up for about five minutes. Uncover grill and using a grill brush scrape any gunk off the grill grates while they’re hot. Oil the grill grates using a wad of paper towels (held with long tongs) dipped in vegetable oil.

To prepare your chicken:

Prepare your chicken by spatchcocking it. This is just a hilarious word for cutting out the backbone. You can hold the chicken upright on a cutting board and use a knife to cut down either side of the backbone (kind of dangerous IMO), or you can use a pair of kitchen shears (you know, the ones that came in the knife block that otherwise just take up space). If you use shears, just cut up either side of the backbone to remove it. Then clean up the chicken by trimming any large pockets of excess fat or skin.

Grilling your chicken:
Lay the chicken, skin side up, on the cool side of the grill (with no coals), with the legs closest to the coals. Cover the grill and make sure the vents on the top and bottom are halfway open. Cook for 30-40 minutes or until the internal temperature at the thickest part of the breast reaches 150°F.

Uncover the grill and carefully move the chicken to the hot side of the grill and flip skin side down. I find using a combination of tongs and a spatula helpful for this. Cook, uncovered for 5-10 minutes until the skin browns and the internal temperature of the breast meat rises to 160°F. Keep a close eye on it to make sure the skin doesn’t burn. If it’s getting too dark, carefully turn it skin side up and let it continue to cook until done – still on the hot side of the grill. When the breast meat reaches 160°F remove the bird from the grill and place on a cutting board. Let the chicken rest for at least 15 minutes before carving and serving.

I start with the dark meat (legs) closer to the heat source, as they take a little longer to cook than the breast meat. 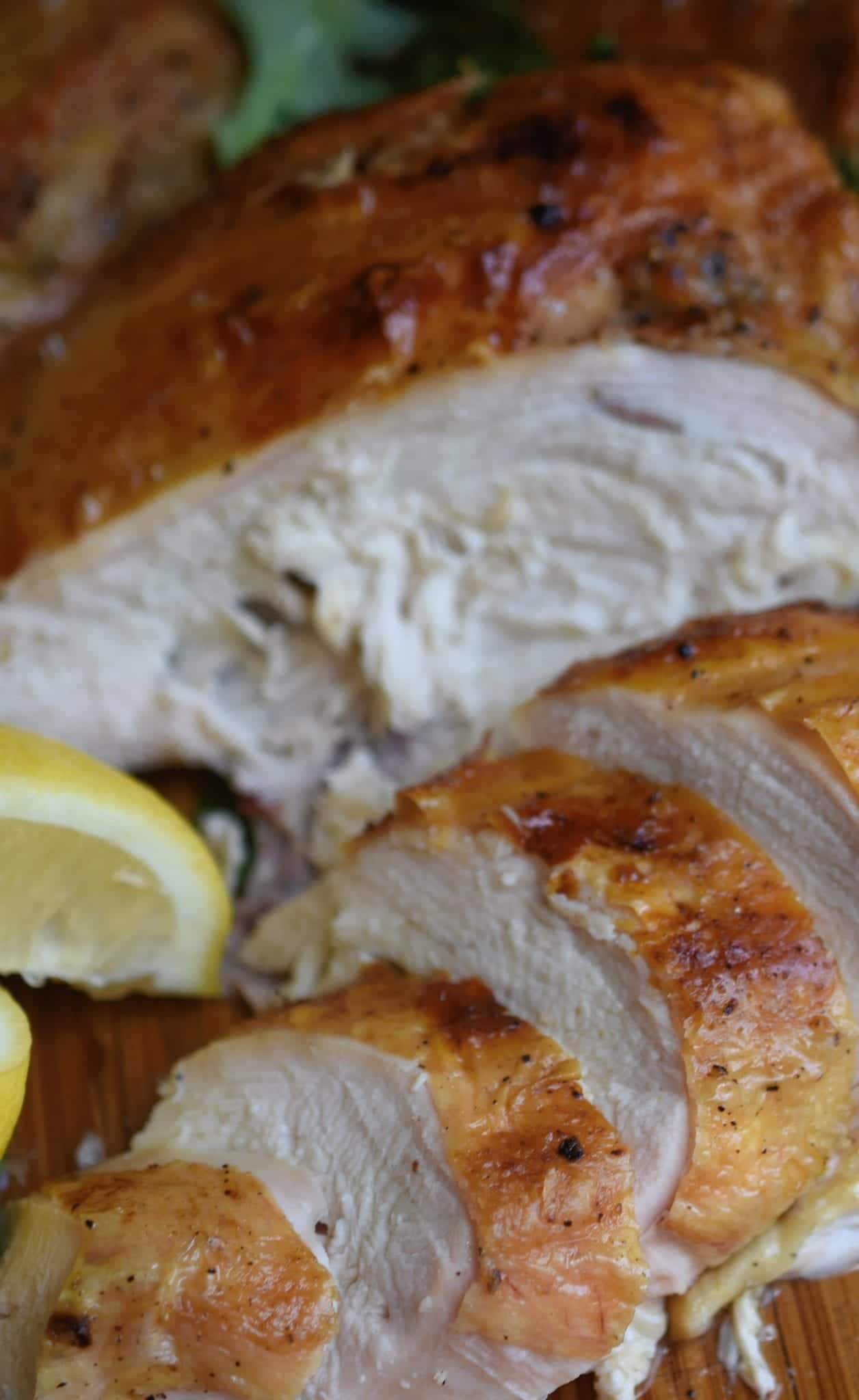