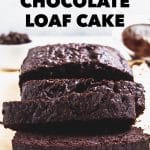 This super simple, dark chocolate loaf cake, is what afternoon snack dreams are made of. Learn how to make this everyday cake today! 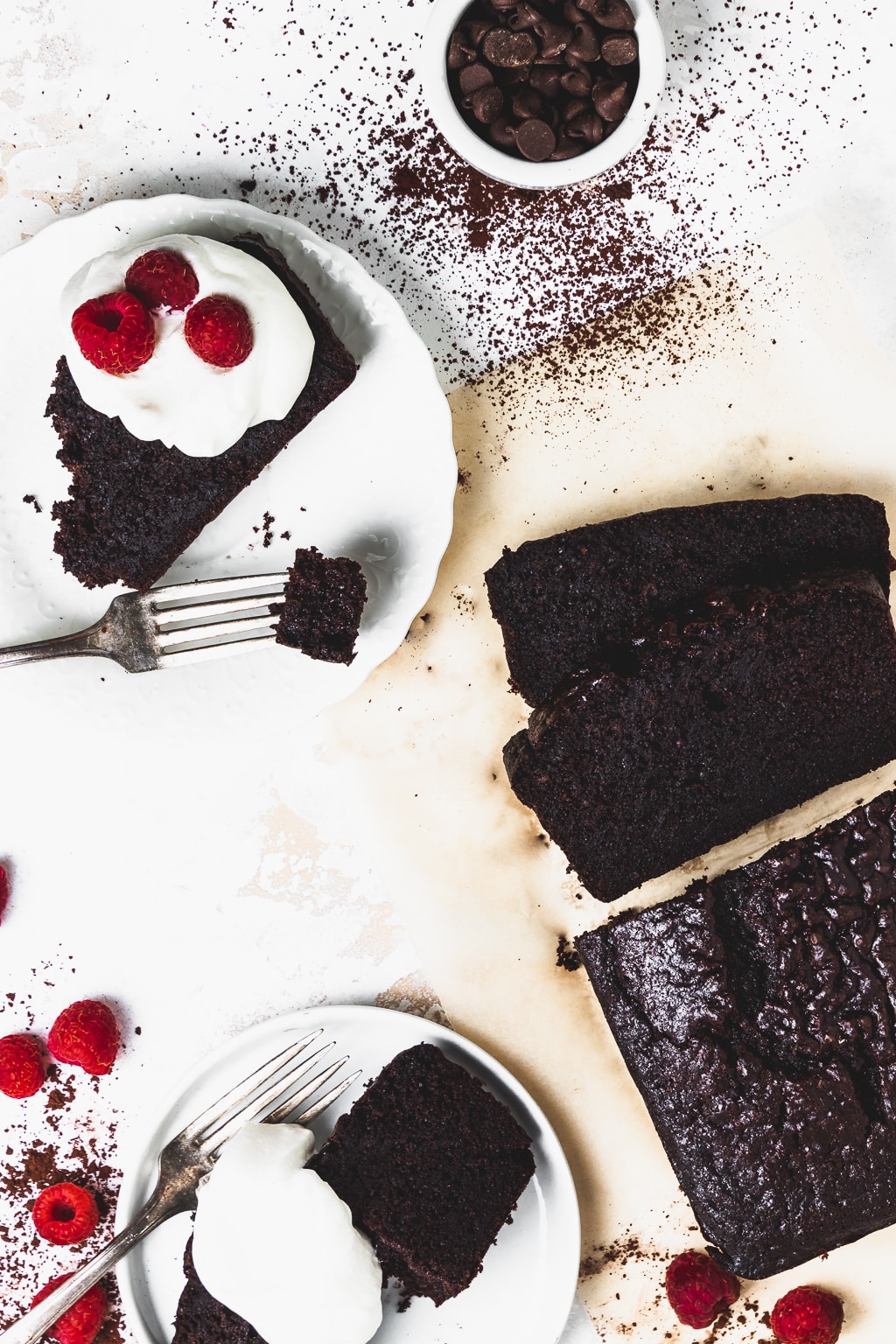 Did you have something that as a kid you thought was fancy AF but now you realize is just…a thing? Eddie recently shared that as a kid he thought the Ruby Tuesday at the local mall was the most expensive restaurant imaginable – which I think is adorable. Of course, I have some of my own too. Including bolo neckties, jelly sandals, rolling suitcases, and earmuffs. Please do take a moment now to picture that person – epitome of glam, right? Of course I had these weirdly pre-conceived notions about food as well. And loaf cake, specifically chocolate loaf cake, even more specifically Entemann’s chocolate loaf cake was at the top of that list.

I’m not sure what it was. I know we bought it at the regular old grocery store, and that it wasn’t just for special occasions. Hell, it didn’t even have ANY FROSTING. But for some reason I felt like the freaking Queen of Sheba when I carefully opened that paper box and revealed the dense, dark, chocolately loaf within. 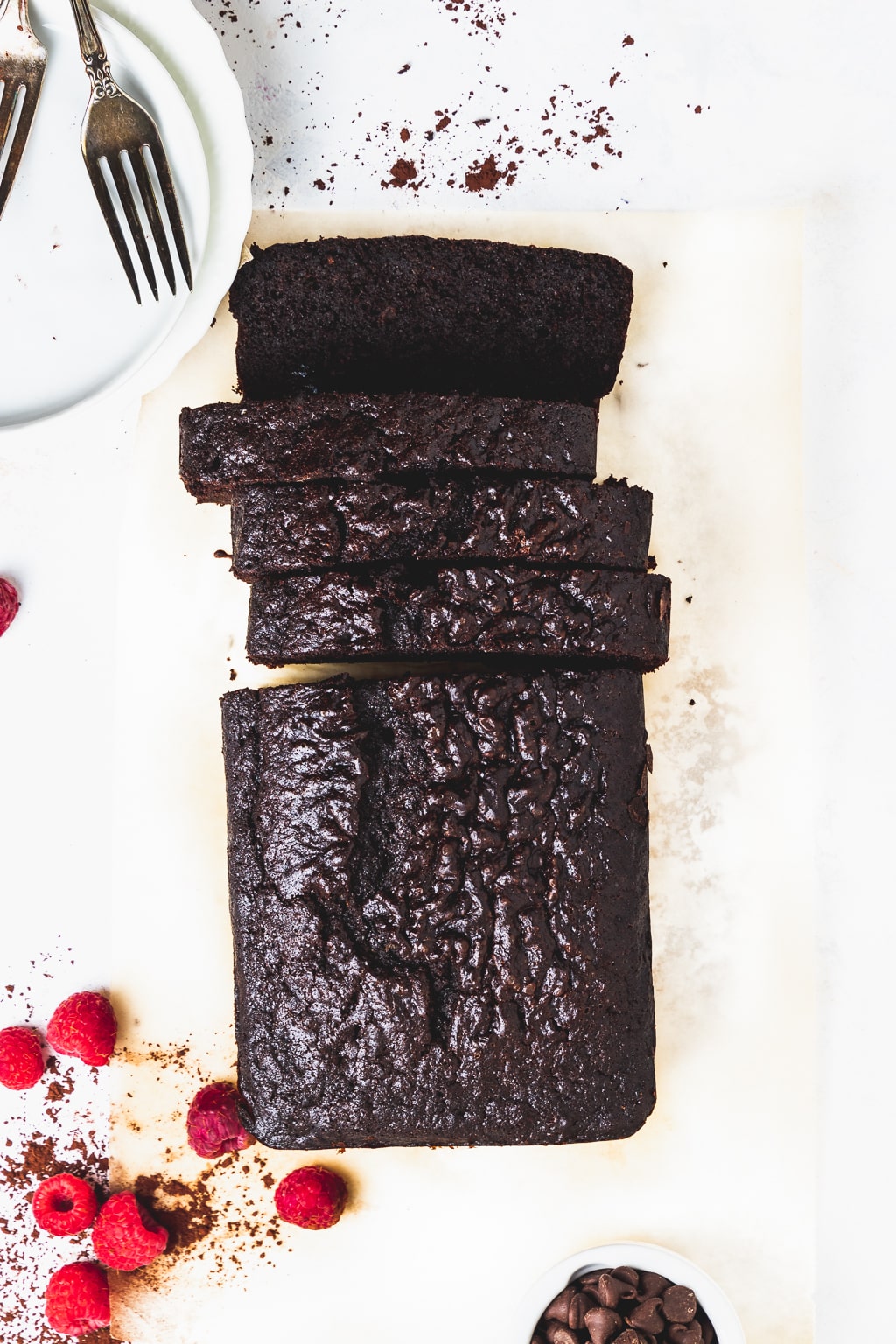 Nowadays I don’t usually (re: ever) buy pre-baked, shelf stable, grocery store cakes. If I could only find the chocolate loaf cake of my youth though (it’s exceedingly difficult to locate in the wild) I might make an exception. Although on second thought, I’m not sure it would live up to the memory, and rather than bust up that sweet childhood nostalgia, perhaps I’ll leave what’s past in the past.

But we’ve still gotta have cake. So as an homage to the fancy, not fancy chocolate loaf cake of my youth I’m sharing this super easy, incredible simple, ultra moist (sorry, but that’s what it is), nice enough for company but casual enough for an afternoon snack, updated for 2019, dark chocolate loaf cake recipe with you right now! 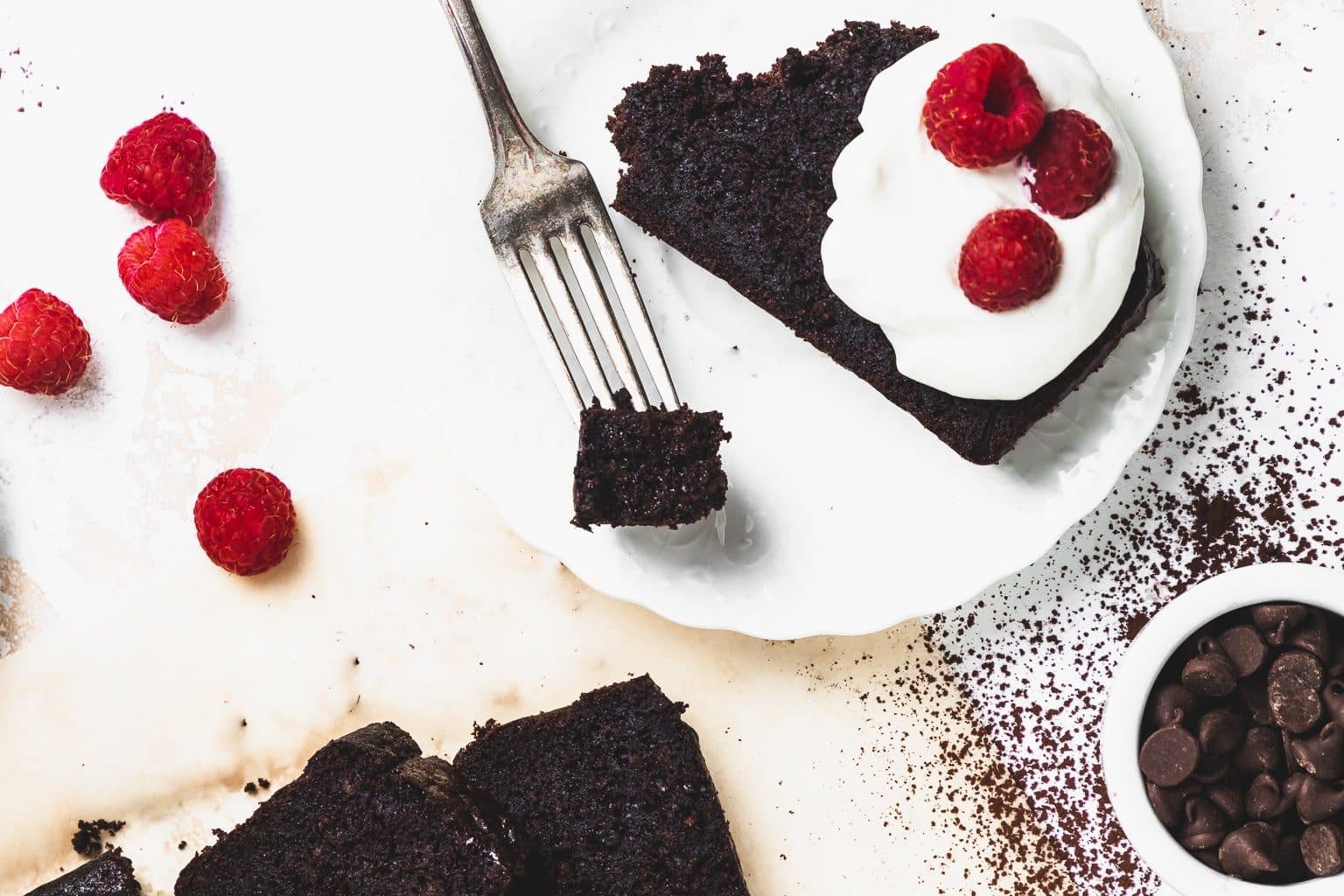 What is a loaf cake?

Easy question, easy answer. It’s a cake baked in a loaf pan. But underneath that veneer of simplicity lies a few secrets. Loaf cakes usually have a pretty dense crumb due to less rise. That density also tends to lend itself to a moister cake. This is good because for the most part loaf cakes are also not frosted – occasionally glazed. Some loaf cakes are pound cakes and some pound cakes are loaf cakes, but they’re not interchangeable as recipes. This cake for example is not a traditional pound cake, which employs a straight forward 1:1:1:1 ratio for butter, eggs, flour, and sugar.

Loaf cakes are also closely related (if not the same thing exactly) as some quick breads. For instance, I’d argue that banana bread is really closer to cake than anything else. You can fight me on it, and I’ll let you maintain the idea for your own sanity, but we know…dat’s cake. 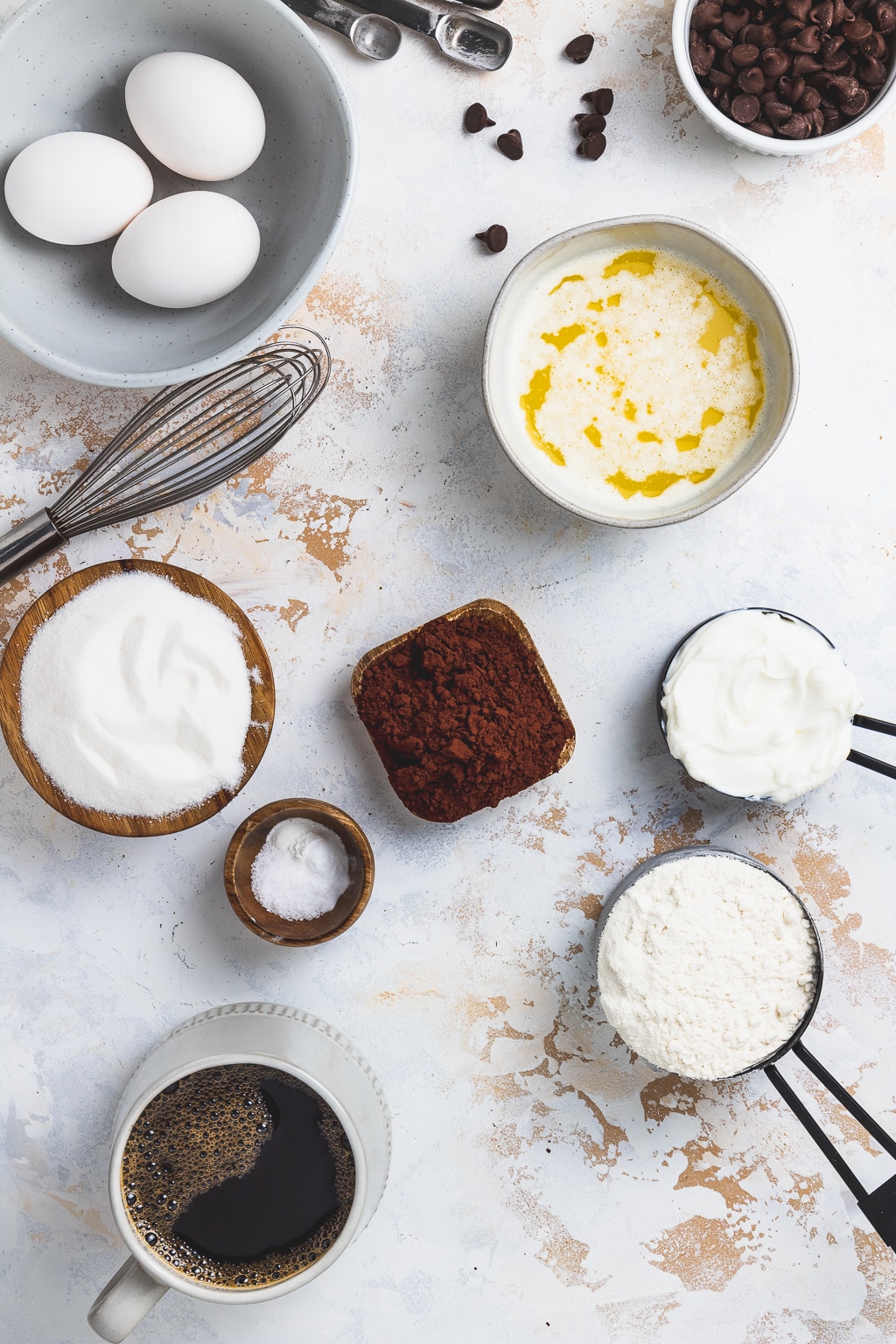 Not a ton. I’m not trying to reinvent the wheel after all. But I am sharing a few tips that make this, to me at least, one of the easiest, every day chocolate cakes on record. First we’ll start with the chocolate bit. I’ve got a mix of melted chocolate and cocoa powder. I like the mix for two reasons – one, more chocolate is more better, obviously. And two, they both bring something different to the party. Cocoa gives you an intensely rich hit of deep, dark chocolate flavor, while the melted stuff adds a little body and a nuanced richness from the addition of cocoa butter.

You’ll also notice coffee. I’m not calling this a coffee chocolate cake because honestly, even with a full cup of strongly brewed Joe, it’s more chocolate forward than anything else. But I wouldn’t skip it. Coffee and chocolate complement one another like Holmes and Watson, Jim and Pam, cheese and crackers. They back each other up and bring out the best in one another. To be fair, coffee generally takes a back seat to chocolate, but I don’t think he minds – he’s just happy to be helpful. He’s totally the Watson. 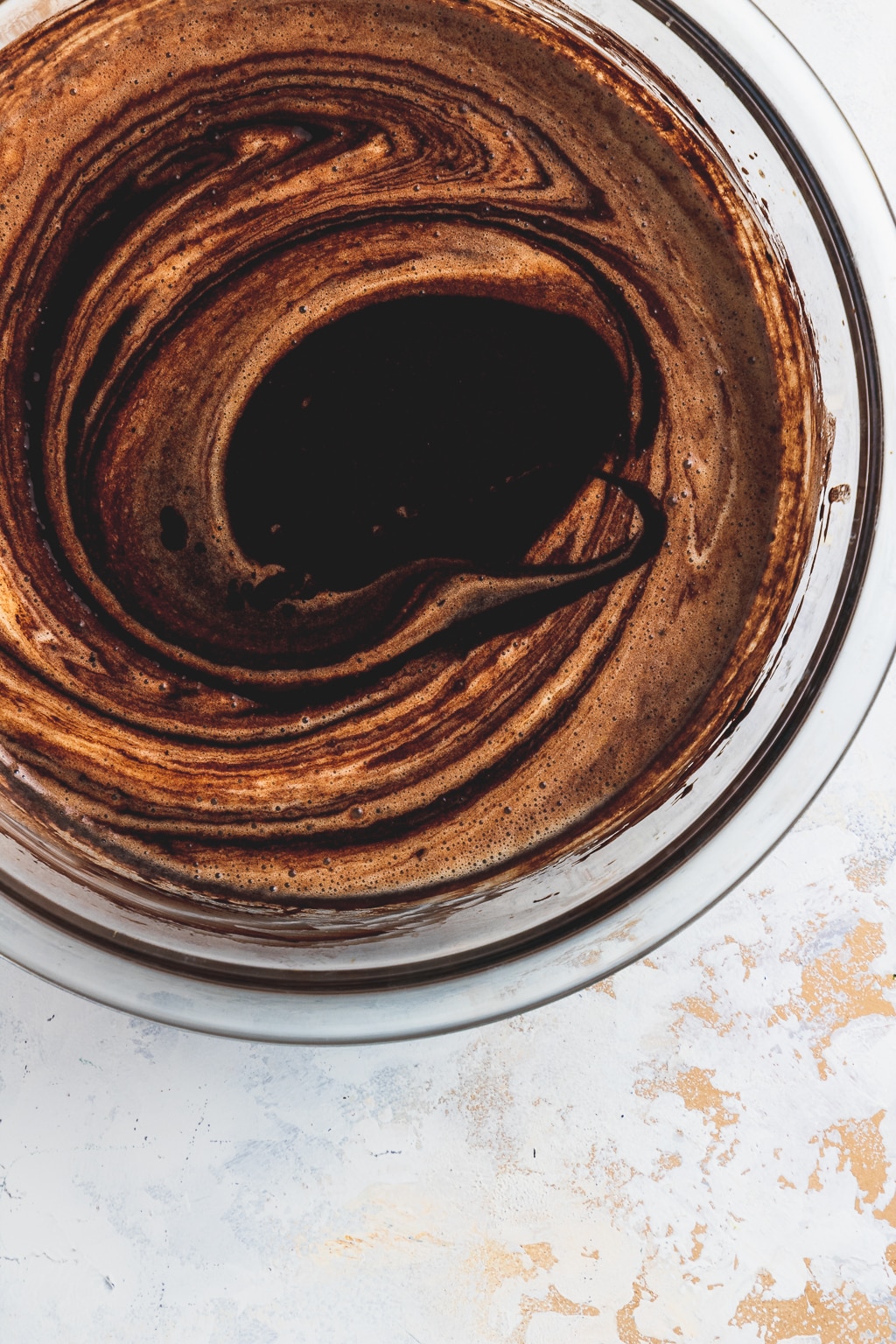 Lastly we’ve got yogurt. I cook with yogurt a lot. Why? Well I like the stuff and tend to buy it in large containers. Then when I’m making a recipe I’m like “damn, I gotta use up the rest of this yogurt” and brilliance is born! But beyond the desire to be less wasteful, yogurt plays an important role in this cake. In the flavor department yogurt adds that distinctive tang – which against all the knock you over the head, drag you back to the cave, richness of deep, dark chocolate, strikes a nice balance. Also, yogurt is a natural tenderizer, so its secondary job is to keep this dense, fudgy loaf cake supremely soft and tender. Can you substitute a slightly smaller amount of milk for the yogurt? Well yes, but it won’t be the same – just saying.

Tips for making the best chocolate loaf cake ever

What do you need to keep in mind to make the best cake? Recipes like this one are pretty simple and straight forward, but a little help never hurt anyone (at least where chocolate cake was involved). 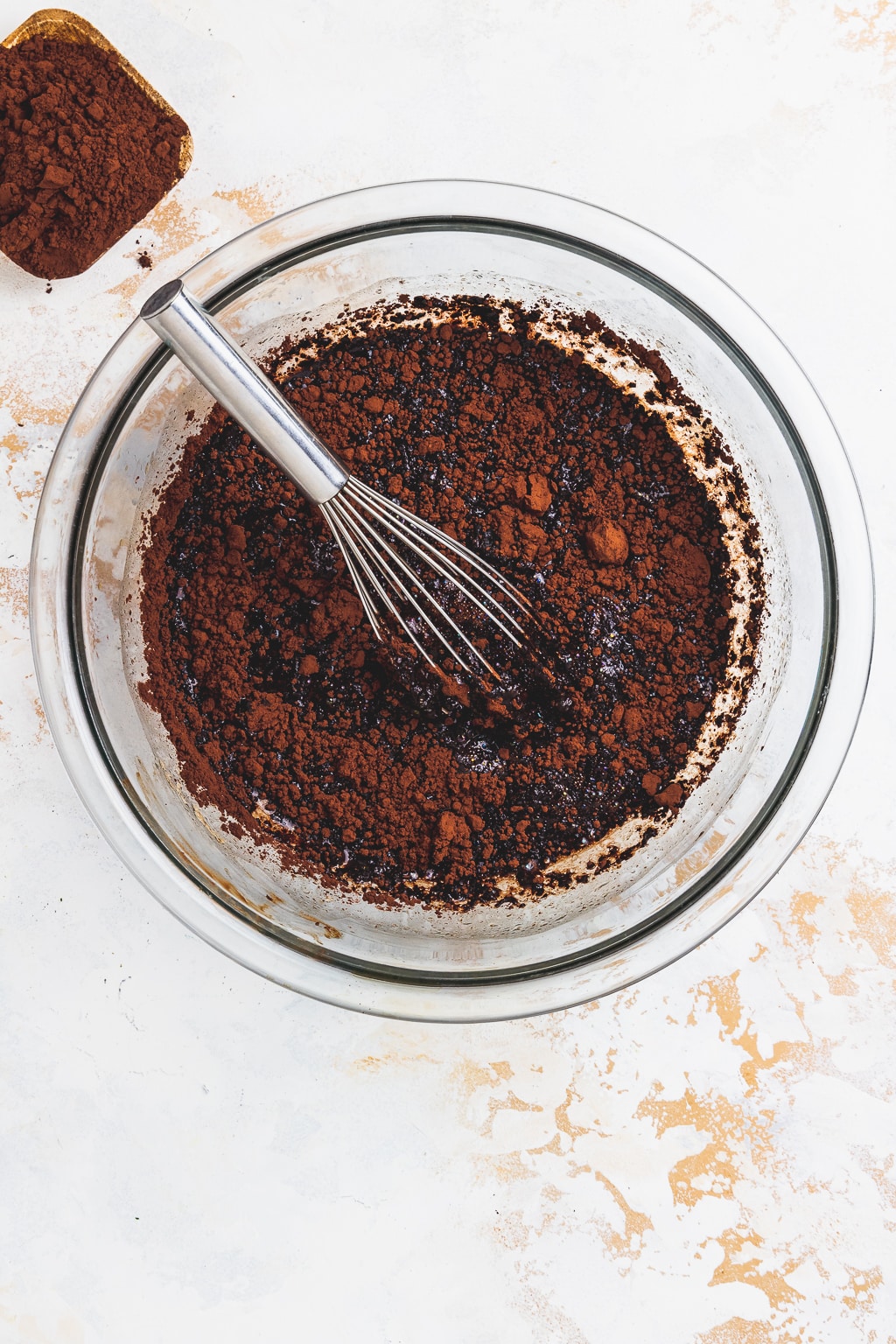 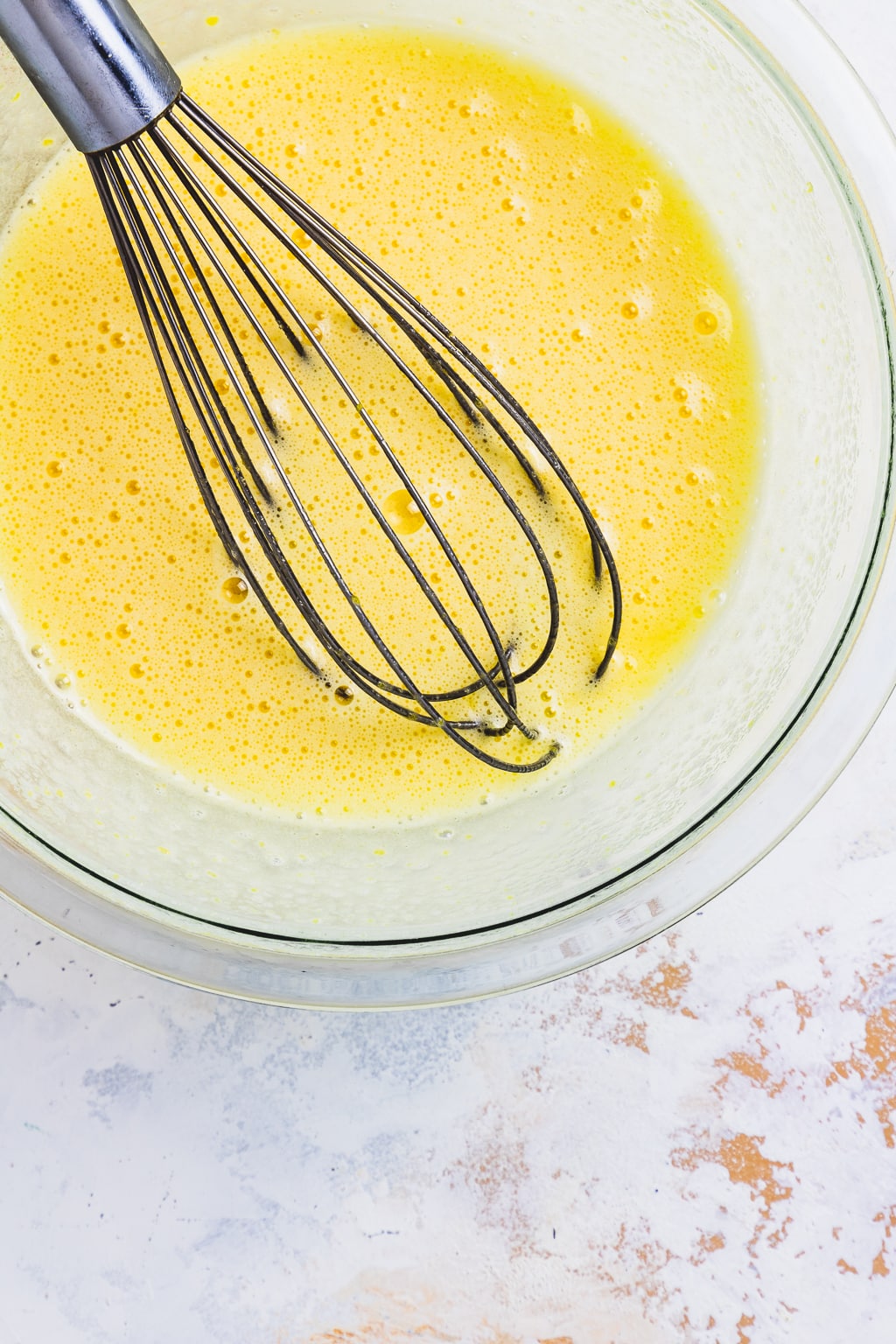 And with that you now have a recipe for what I considered to be the height of sophistication as an eight year old. Ah, it was a simpler time. Although I’m pretty sure if I tested my childhood version side by side with this dark chocolate number, this one would win ten times over. You never know though. Sounds like an excellent way to spend an afternoon.

Happy Friday, friends! If you give this chocolately treat a try, please let me know in the comments, on social media, or via smoke signal. Please do not notify me by way of carrier pigeon though, as birds hold the top spot on my list of mildly irrational fears. 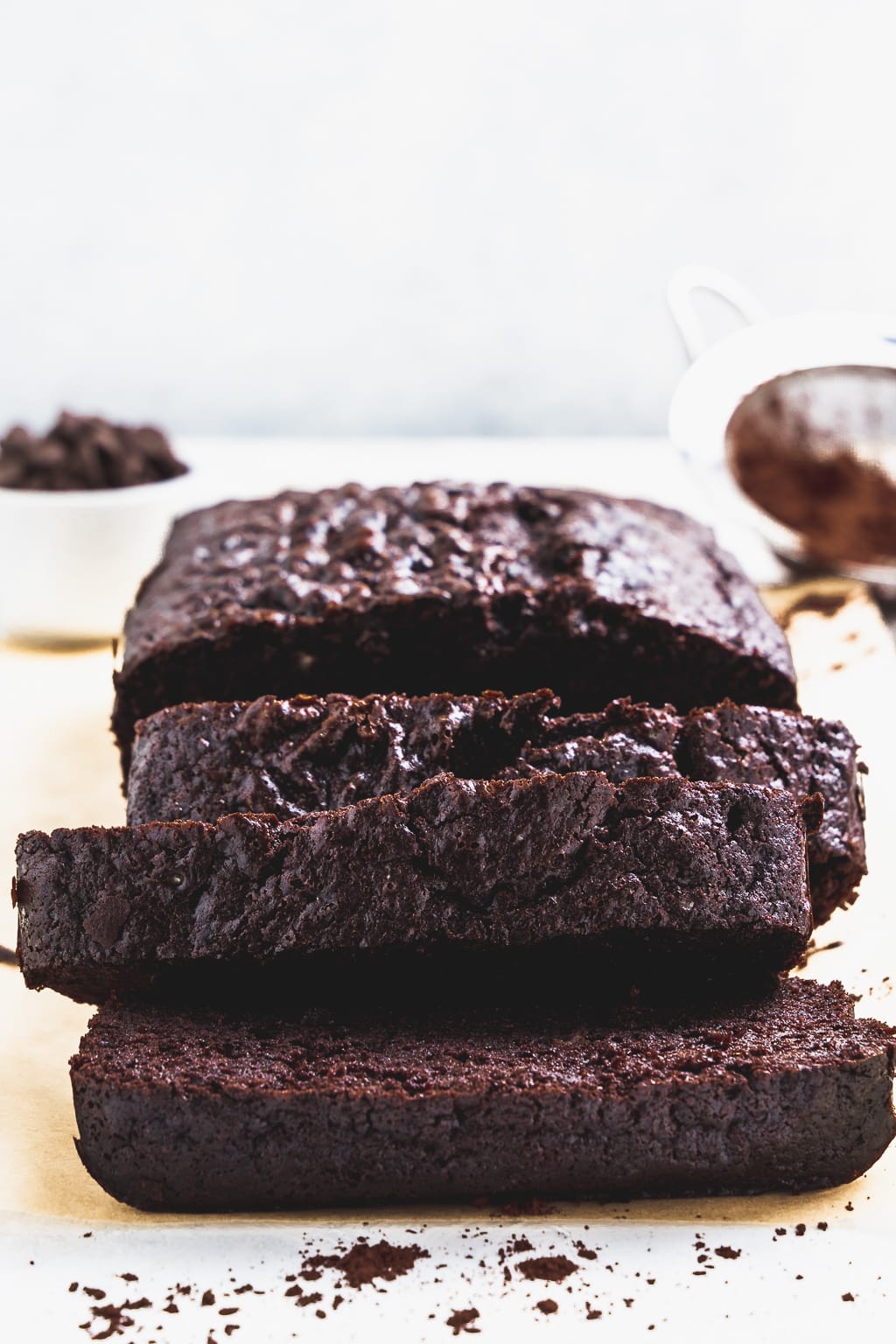 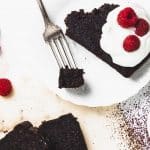 Preheat oven to 325°F. Line a loaf pan with parchment paper and spray with non-stick spray. Set aside.

In a medium bowl combine the butter, chocolate chips, and coffee. Melt in the microwave for 30 – 60 seconds or until the chocolate is melted. If your coffee is freshly brewed you can just pour it over the chocolate and butter and the heat of the coffee will melt everything. Add the cocoa powder and whisk until smooth.

In a large bowl vigorously whisk together the eggs and sugar for 2 minutes, until the sugar is mostly dissolved and the eggs begin to lighten in color. Add in the yogurt, vanilla, and chocolate coffee mixture. Sprinkle flour, salt, baking powder and baking soda over the top and whisk gently, just until no dry flour remains.

Pour batter into prepared loaf pan and bake on the middle rack for one hour and ten minutes, or until a cake tester inserted into the thickest part comes out with only a few moist crumbs attached, but no uncooked batter.

Let cool in pan completely before serving – about an hour.

My loaf pan is 9X4. If you have one that’s smaller you may have to hold back on putting in all the batter, as you don’t want anything to overflow. Also remember if you have an 8X4 inch pan it will take at least ten minutes longer to bake through.

Feel free to substitute greek yogurt for regular plain yogurt, but try not to use non-fat.

This recipe calls for dutched cocoa powder (explained in more detail within the post). I am working on a swap out for natural cocoa powder and will post it here when I’m happy with the result – for now though, please stick to dutch processed cocoa powder.