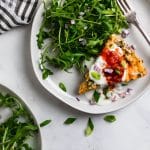 This corn and poblano frittata makes an easy weeknight dinner or delicious, savory brunch. I love it served with all the garnishes I might add to a taco!

Char the peppers directly over an open flame (or under the broiler), turning frequently until the outside is completely charred and black – about five minutes. Place the charred peppers in a bowl and cover tightly with plastic wrap or foil. Set aside.

Meanwhile, whisk the eggs together with the half and half, 1/2 tsp of kosher salt, and the black pepper. Set aside.

Heat a cast iron, or non-stick, oven safe skillet over medium heat. Add oil and corn kernels. Spread the corn into one even layer and cook, undisturbed, for 3 minutes. Then stir and continue to cook for an additional 2 minutes. The corn kernels should brown and start to barely char in places.

Remove the peppers from the bowl and using the back side of a knife, scrape away the charred skin*. Then remove the stem and seeds and chop the peppers into a small dice. Add the chopped peppers to the corn mixture and stir to combine.

Add the cumin, garlic powder, chili powder, and remaining salt and cook for one minute.

Spread the corn and pepper mixture into an even layer and pour the egg mixture to cover. Sprinkle the cheese evenly over the top and transfer the pan to the preheated oven. Bake for 25 minutes, or until set in the middle, puffed, and golden brown.

Let cool for 5 minutes. Slice and serve, garnished with toppings of your choice.

*Don’t worry about getting all of the charred bits off the peppers, just most of it. Do not rinse them, or else you’ll lose all the good charred flavor.

Half and half is really the best option for this, but it will also work with heavy cream or whole milk. Don’t use skim or reduced fat milk though.