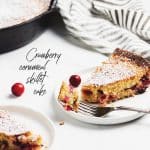 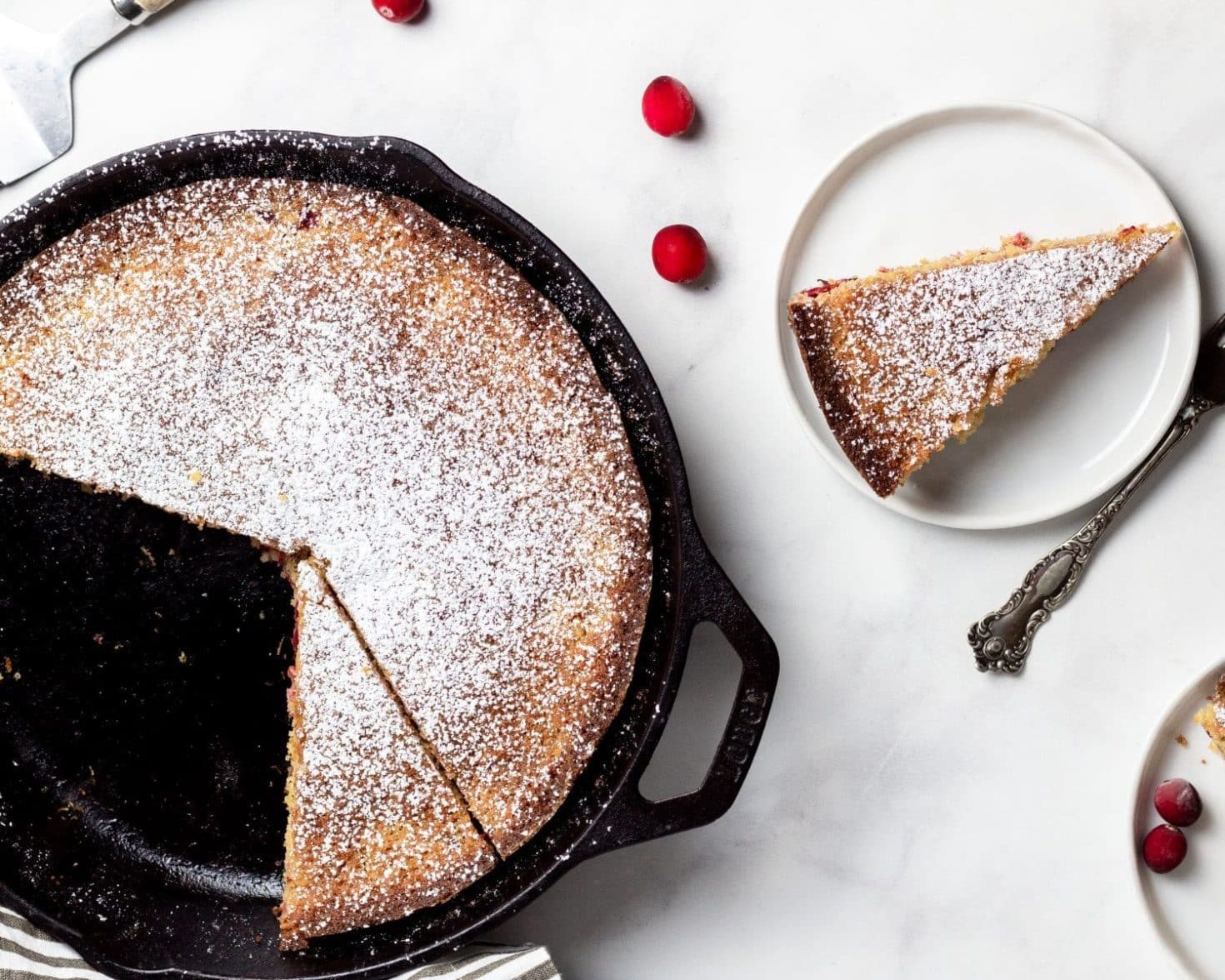 If you read this even sporadically, a few things about me will start to become clear. I am obsessed with the weather, my cats take up an embarrassing amount of brain space, and I freaking love to make things in cast iron skillets.

Today is no different from yesterday – well unless you abide by generally accepted science, and so actually everything is different from how it was yesterday, but this is not a blog about science so I digress. ANYWAY… I’m mostly the same and that includes a penchant for whipping up stuff in my beloved cast iron skillet.

Today it’s a cake. However a cast iron skillet’s great for pizza, breads, frittatas, fried chicken, steaks, breakfast hash, and pretty much all the other things that are fit to be cooked – minus fish and tomatoes (more on that later). So why isn’t everyone using cast iron all the time then? My personal theory is that there are a lot of questions about it, and people would rather go with what they know than have to buy a new piece of cookware and figure that shit out. But cast iron is so worth the research, so let’s get educated! 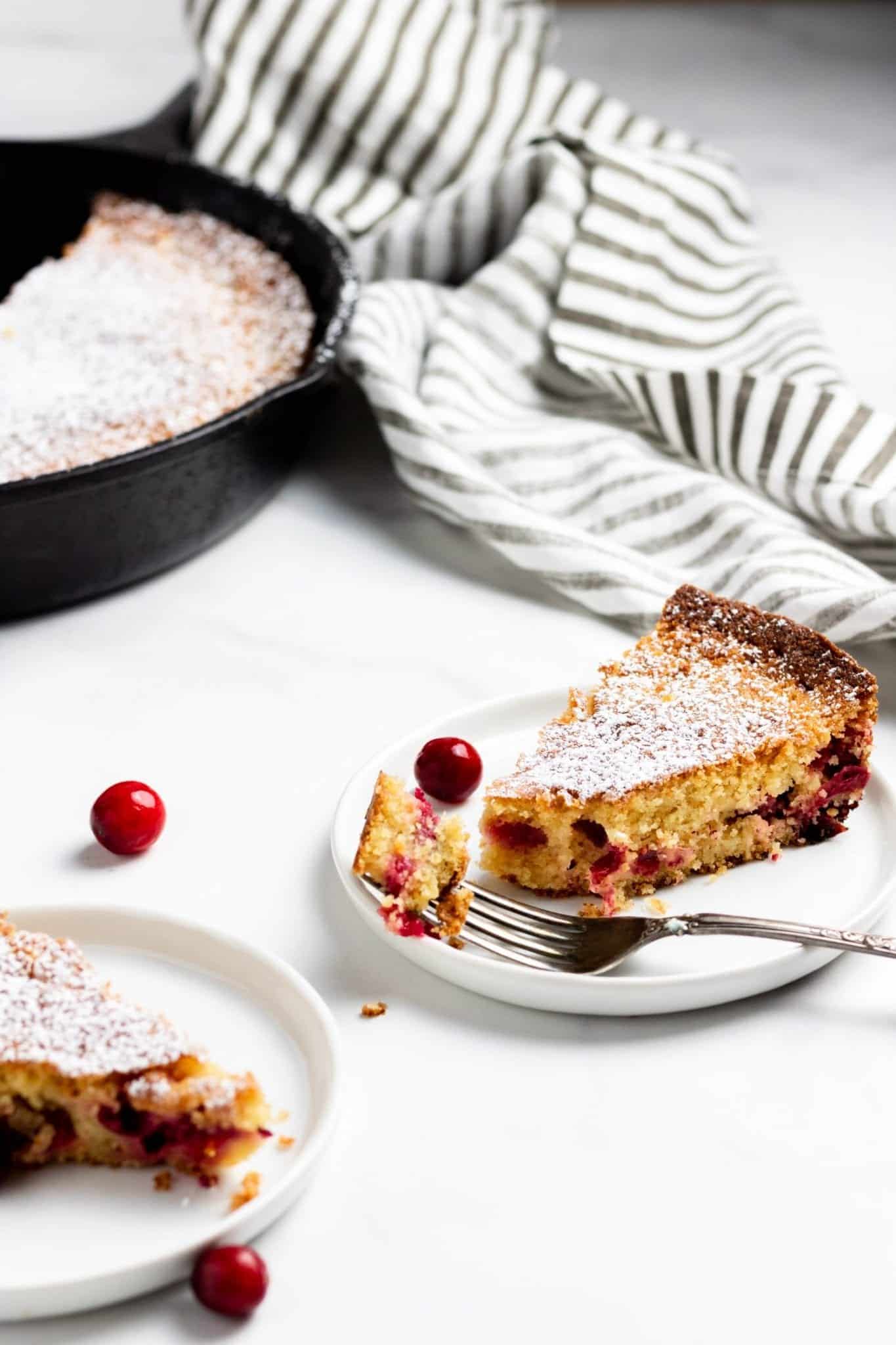 Knowledge dropped. And if you abide by note #6 then you can also make this super festive cranberry cornmeal cake in your beautifully seasoned, forever lasting, ridiculously versatile, cast iron beauty, too!

Some deets about dat cake:

Cake is delicious, duh. You knew that. But this cake is just a little bit different. It looks a bit unassuming (no frosting, only one layer) but just picture it. Take a golden-brown cake that’s over the top buttery, tender as can be, and scented with brown sugar. Then stud it with more cranberries than any sane person would dare shove into one confection. Oh, and then there’s the edges…oh man the edges! That cast iron skillet imparts a beautifully caramelized, crispy-chewy-sugary hybrid of an outer crust that I would totally fight you for – like seriously.

So now that you’re armed with a properly seasoned pan and a killer recipe, can you invite me over? K, thanks.

And while I’m asking for stuff…I’d super, crazy, appreciate it if you hopped on over to Instagram for a second and gave me a quick follow. Also be sure to snap a pic and tag me if you make this or any of my other recipes because duh, I love seeing that stuff. Happy Friday!

*haha sole-ly – I amuse myself. 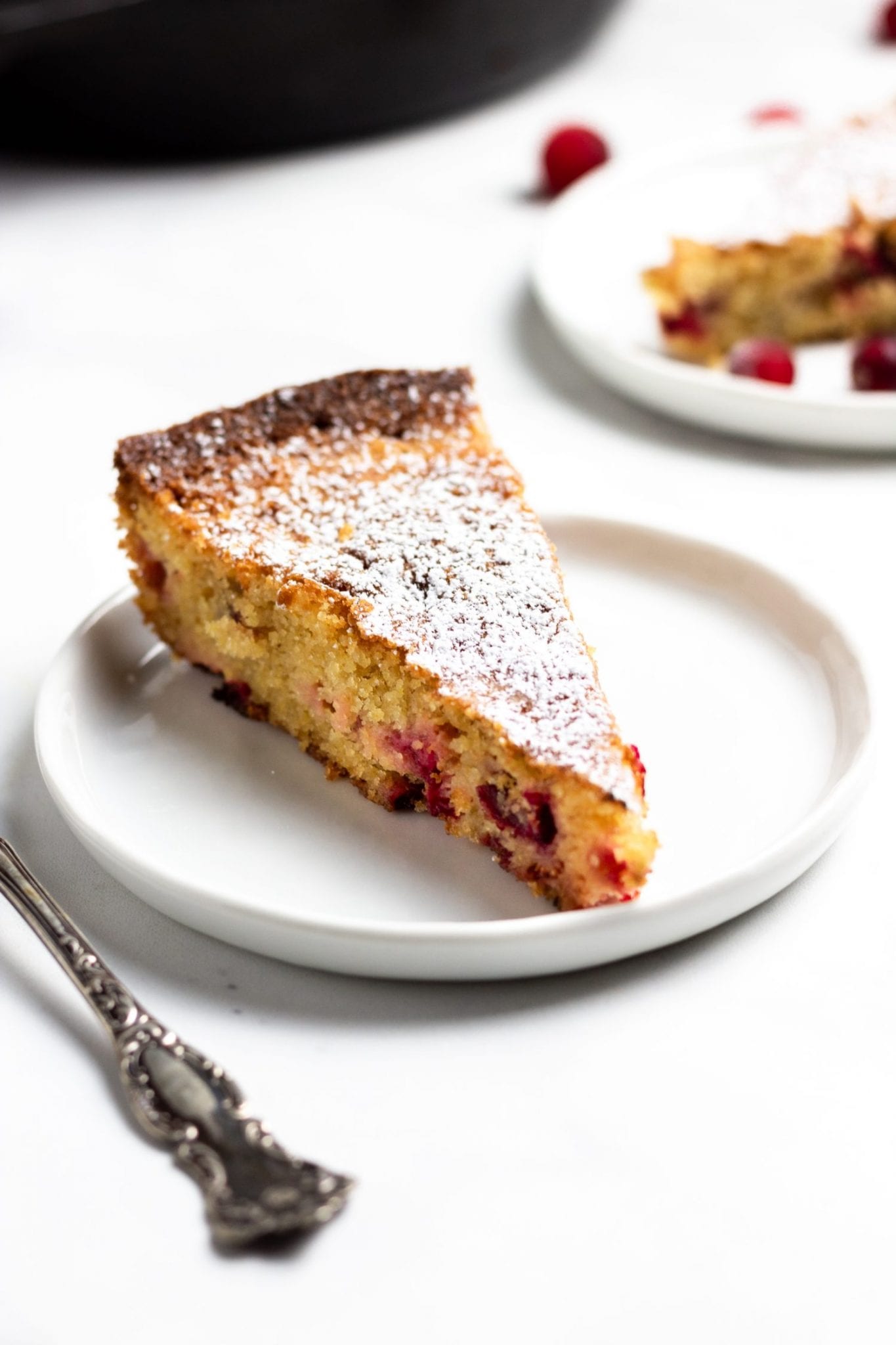 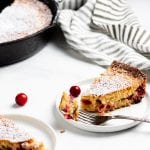 This cake is festive and so, so easy. I mean I love any dessert that’s baked and served in the same pan! It’s nutty, buttery, tart, and not too sweet. Best enjoyed alongside a hot cup of tea

In a medium bowl, whisk together the flour, cornmeal, baking powder, salt, and baking soda. Set aside.

In a large bowl beat together the butter and both sugars, until light and fluffy, using a stand or handheld mixer.

Add the eggs and vanilla and beat until thoroughly combined.

Fold the cranberries evenly into the batter using a rubber spatula.

Spread the batter evenly into the prepared skillet and bake on the middle rack for 50-55 minutes. Or until a toothpick inserted into the middle of the cake comes out with a few moist crumbs.

Let cool in pan for at least 30 minutes before serving. 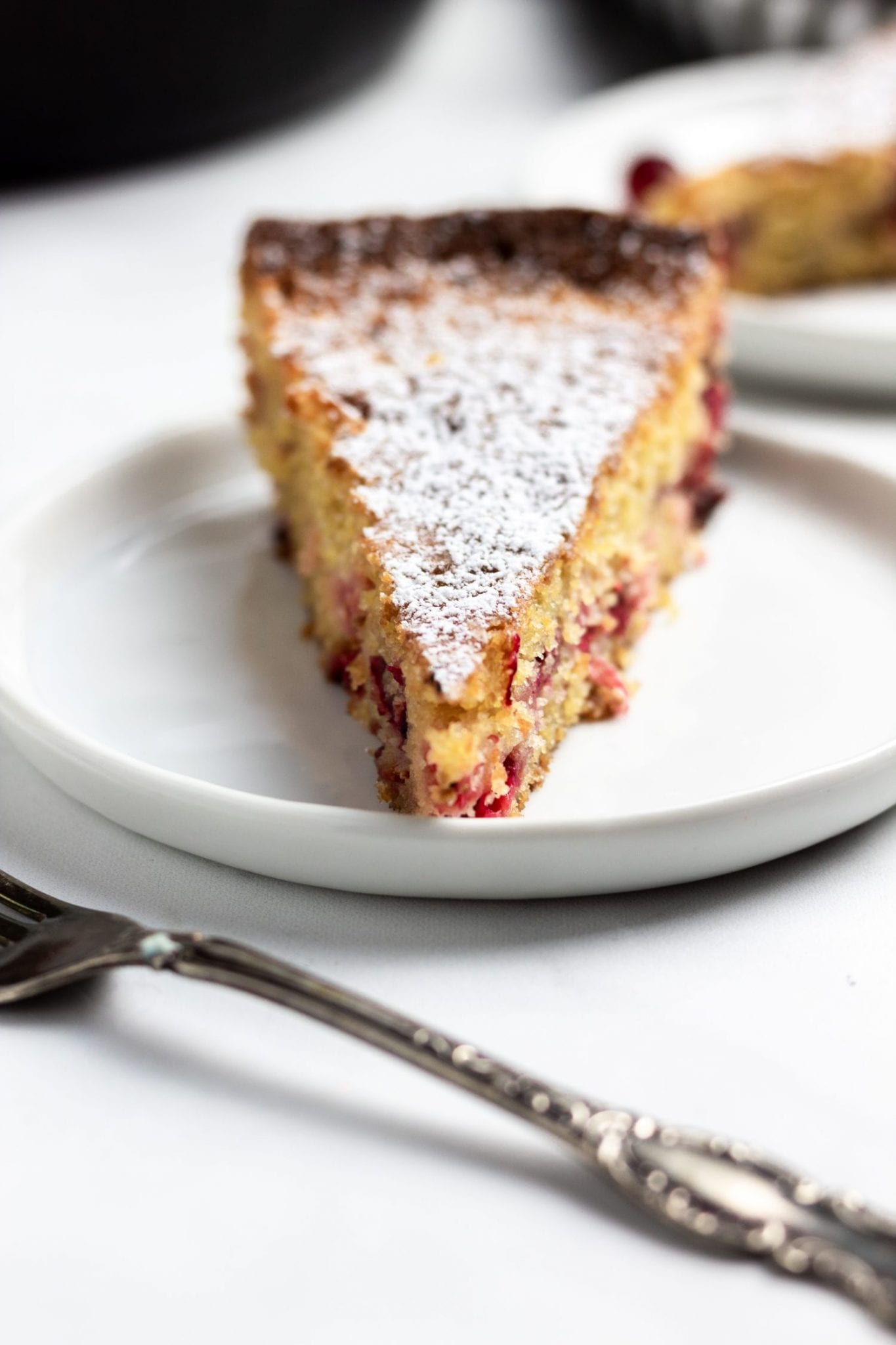 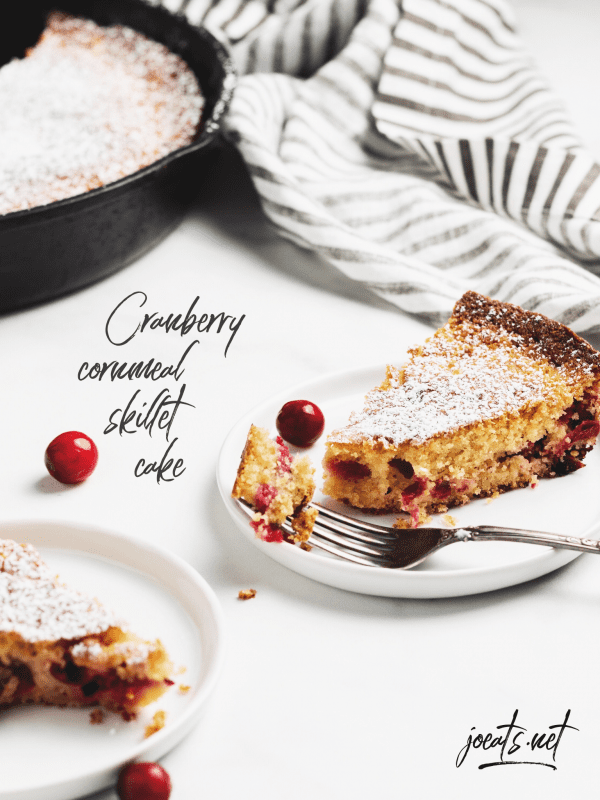 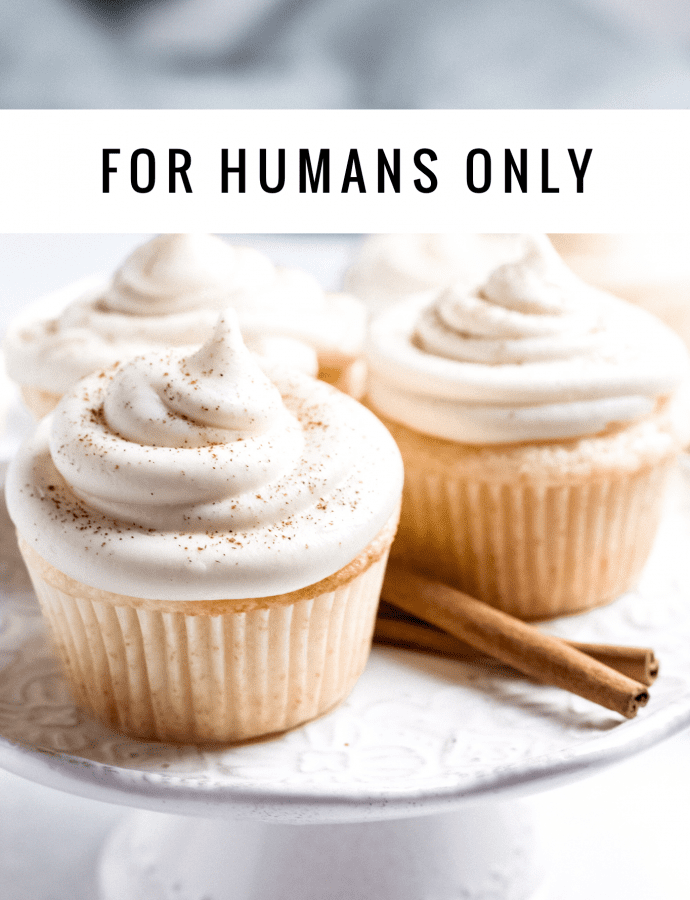