Toast was one of the great joys of my childhood. Experimenting with what I could layer on slices of  bread was actually kind of a pastime (no siblings at the time + poor social skills = a lot of QT with the toaster oven). I started simple – butter, jam, cinnamon sugar. Eventually I happened upon the joys of cheese toast and quickly wiped out our supply of Kraft American singles*. Some days I opted for cream cheese, on others it was jarred Prego and shredded mozzarella.  However, my dad’s contribution of creamy peanut butter which melted and oozed all over the warm bread was met with abject disgust. What can I say, kids are dumb. 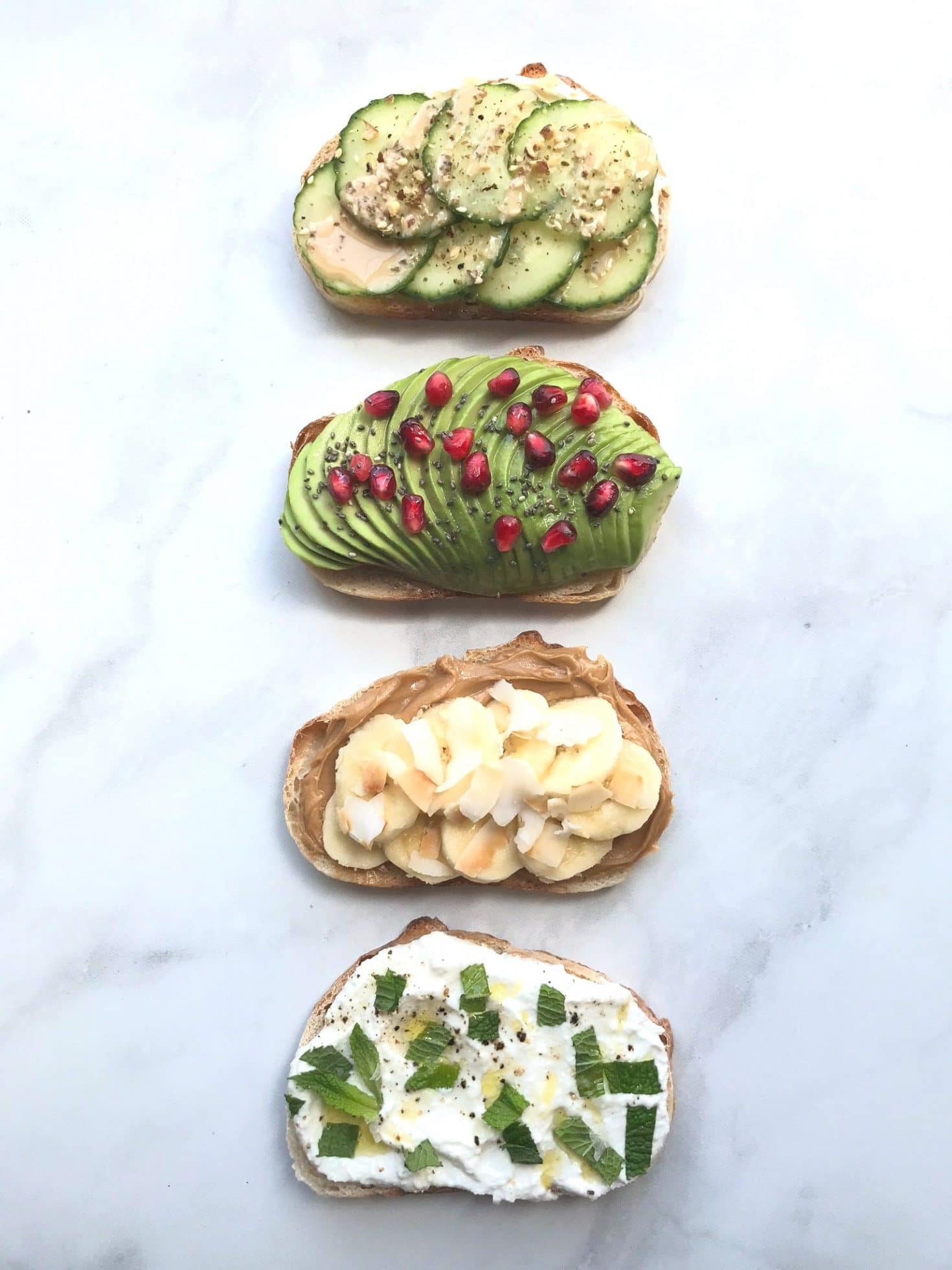 Fast forward several years – I’ve left the cushy suburbs of Washington DC behind for a starving artist’s life in the boros of New York and have discovered that toaster ovens are no longer a luxury I can afford. In fact I didn’t even own a standard toaster (not enough counter space). If I wanted toast I’d use the broiler, or just hold a slice of bread gingerly over the gas burner of my stove top. But mostly my toast consumption simply ceased.

So what’s changed? Well, first I moved in with my boyfriend (now husband) who owns a traditional, slot toaster (which I suppose is now half mine – marriage FTW). And secondly, toast got like, really cool. I don’t just mean trendy, although that description is absolutely valid, but instead cool like interesting. People started using toast as a canvas to layer ingredients, a lot like I did when I was a kid. I’m not saying that I was in any way a predictor of the new toast wave…or maybe I was. Just call me the toast oracle, please…

But anyway, toast is cool and delicious and I thought it’d be fun to get back in the experimenting game. So here are some creations that I’ve found pretty tasty as of late. It feels a little like cheating to call any of these actual recipes, so maybe just think of them as inspirations or jumping off points for your own creative pursuits. Enjoy!

*Don’t judge. I have a deep and abiding love for these chemically-engineered, food-adjacent, beauties. But don’t worry, they won’t appear anywhere in the “recipes” below. 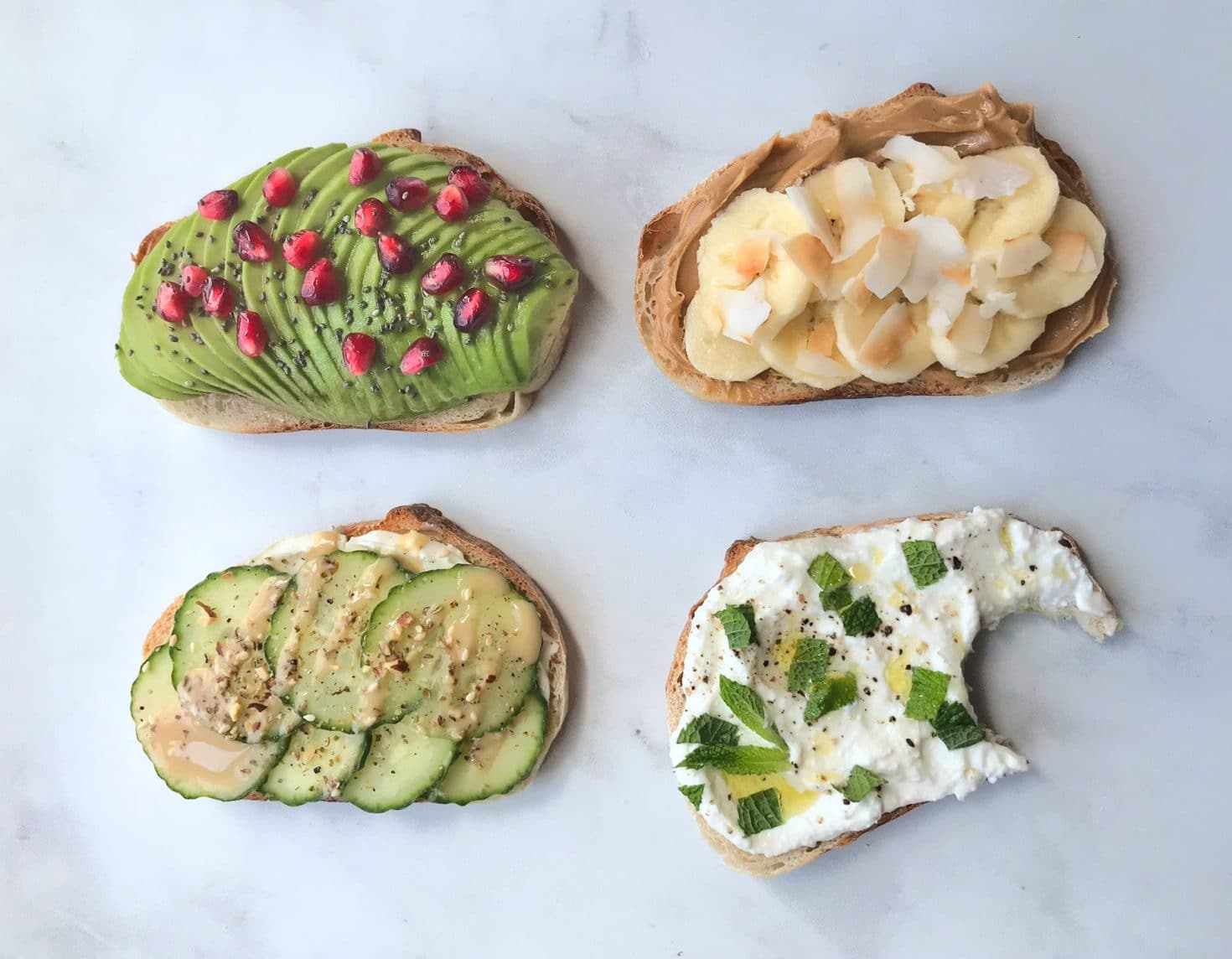 Slather cream cheese on toast and layer on the cucumber slices. Season with salt and pepper and drizzle with tahini. Sprinkle with dukkah if using. Also, make these in miniature as a passable app at your next, FAHNCY dinner part.

Top your toast with ricotta, sprinkle with mint, drizzle with olive oil, and season with salt and pepper. Dunzo.

Toast your coconut in a dry skillet over medium heat, stirring occasionally. This takes about 3-5 minutes, but it goes from toasty to burny real fast, so keep your eye on it.

Top your toast with a healthy dose of peanut butter. Pile on the bananas, and sprinkle with the toasted coconut. Eat that biz.

Toast your bread using whatever method you prefer

Mash avocado* onto toast and spritz with lemon juice. Add pomegranate, chia seeds, and a drizzle of honey. Snap a pic and dive in.

*If you want to make Instagram worthy, avocado toast it’s actually pretty easy. Just take a barely ripe avocado, cut it in half, remove the pit and then using a deft hand, peel the outer skin from the flesh. Then put the avocado cut side down on a smooth, clean surface (cutting boards or counter tops both work well here). Now slice your avocado thinly and evenly starting from one end and making your way to the other, keeping a finger on the slices so they don’t separate when you pull up your knife. Continue until you have an evenly sliced avocado and then using your fingers, gently press the avocado in one direction to fan the slices. Then slide a thin spatula or a knife (carefully, duh) under the whole thing and transfer to your toast. Practice makes perfect, but it only took me about two tries before I got something #adorbs. 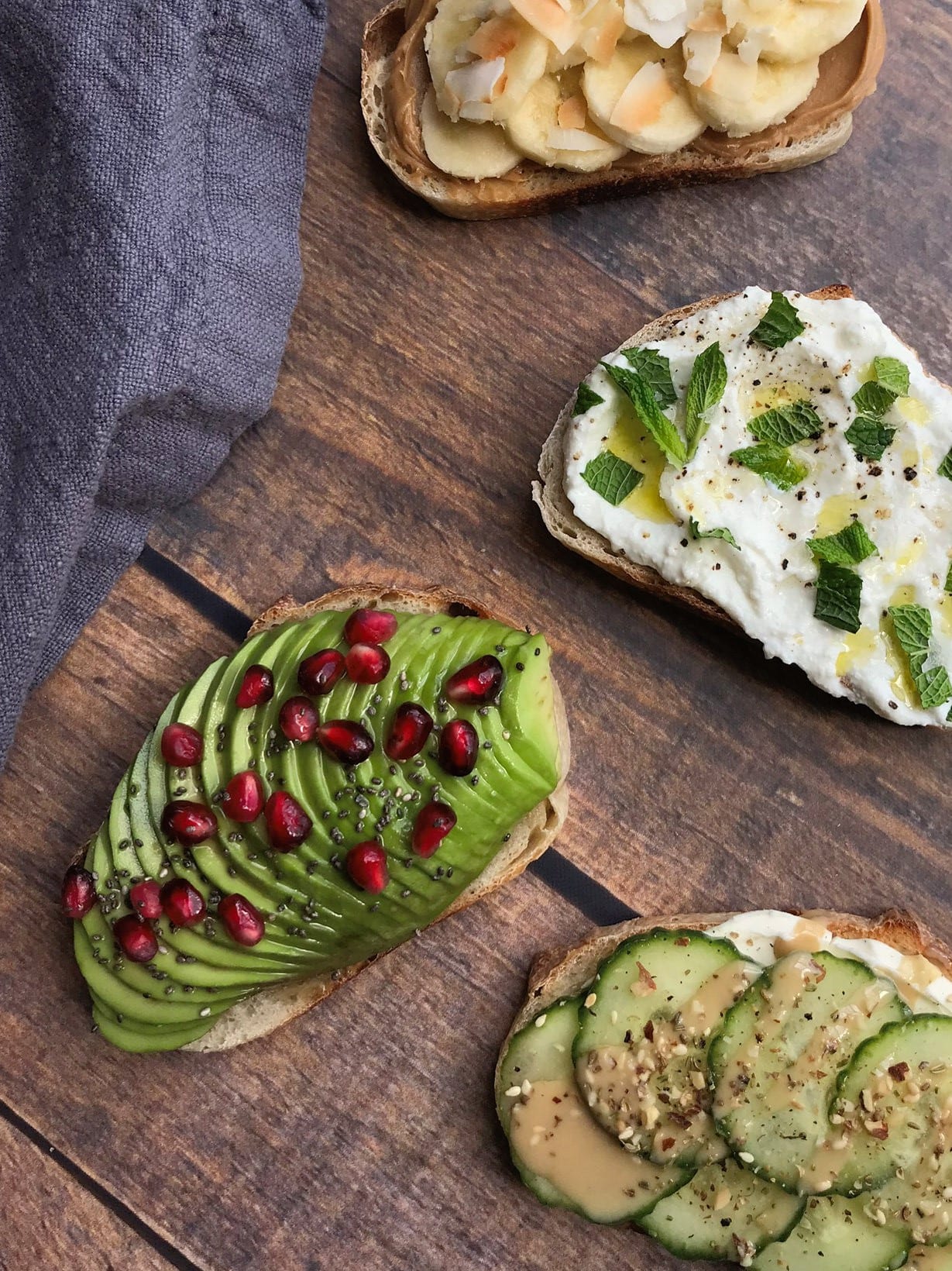