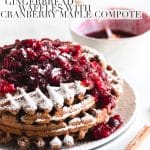 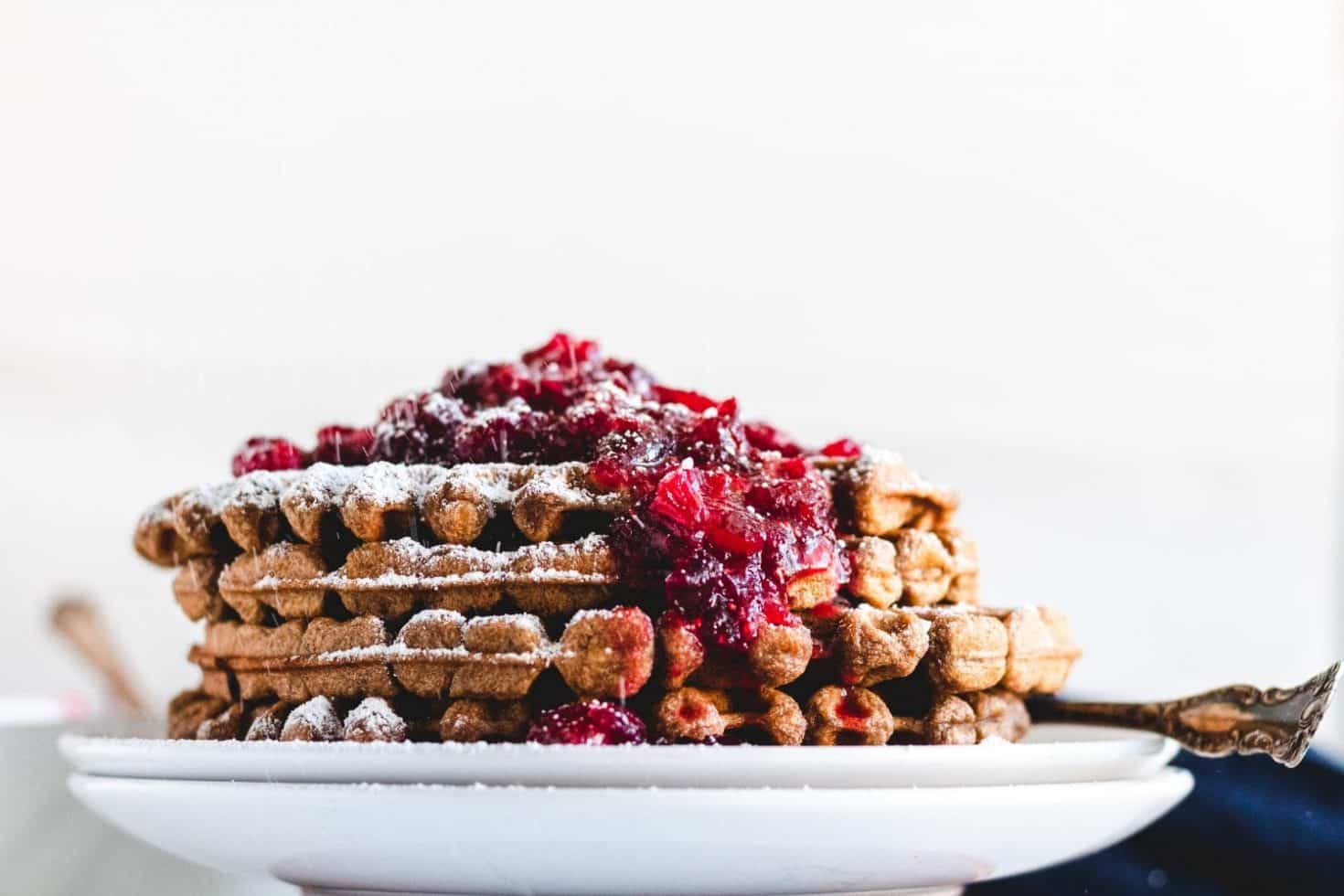 When I was kid cranberries came out of a can. Specifically they “shlocked” out of said can, which is how they got the perfectly descriptive, albeit entirely unappetizing name of shlock shlock in my house growing up. Also waffles – they came from one of two places – the eggo factory or that grand southern belle that is the Waffle House.

So into adulthood, as life educated me on things like paying rent, doing taxes, and the most graceful way to deal with low key, late-night text messages from bad news bears (answer: there is none, just don’t engage at all costs), I also learned that good waffles could be made at home and that cranberries are like a thing that you grow…on a farm…or a bog? I’m still fuzzy on some of the details, TBH. 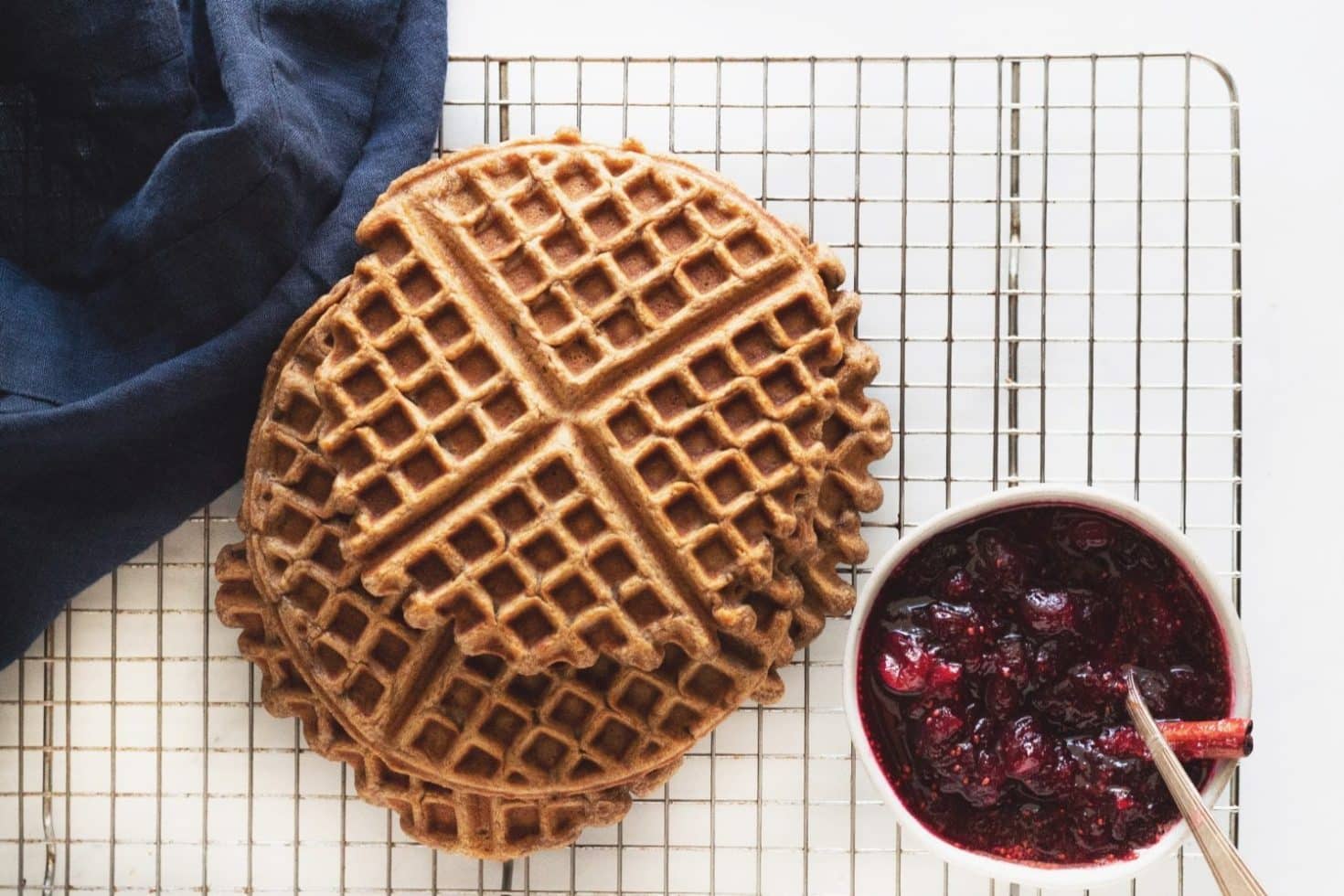 Ah, how far I’ve come. But honestly, sometimes I still have a hard time with waffles. Cranberry sauce, not so much. You basically just throw stuff in a pot, boil it up for a few minutes, and voila! But with waffles – it’s complicated. There are things to consider – square, round, belgian style, yeasted, crisp and light, or chewy and dense? You can’t (I mean you can, but you shouldn’t) just throw some pancake batter into your waffle iron and call it a day.

But with choice comes confusion.

What kind of waffle do I actually want? Well the first thing to know is that you can not, will not please every, single waffle eater at the table.  So just divest yourself of this notion and move on to making something that makes you happy. In my case I prefer a waffle with smaller indentations (ie: more surface area for crisping), with a lot of flavor right in the batter (no bland waffles here, please), and as far as texture goes – I’m middle of the road. I like a crispy exterior with a chewy middle – kind of like me. Oh and because it’s nearly December – I want a holiday waffle! 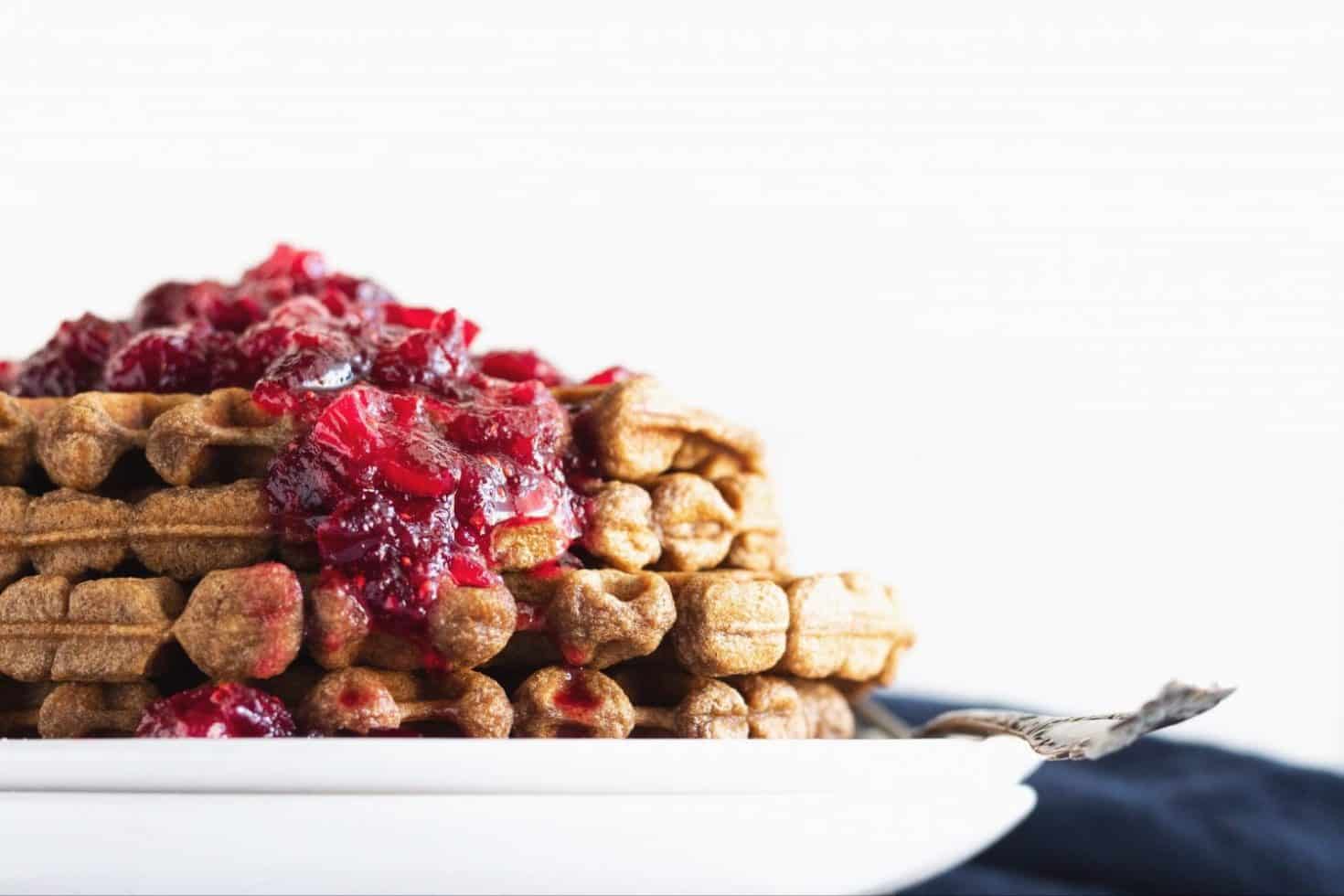 What says holiday more than gingerbread? You could argue a lot of things, but just let me roll with this. I don’t love eggnog and I’m all pumpkined out, so gingerbread is where I landed. Just imagine – a crisp and slightly chewy waffle, scented with cinnamon, nutmeg, ginger, and a touch of clove, draped in tart and sweet cranberries and drizzled with even more warm maple syrup? I mean if that’s not a picture perfect breakfast for a snow day in footy pajamas, then I don’t know what is.

Now that I know what I want, how do I go about achieving my own, personal, waffle nirvana? Well firstly I will test this waffle recipe so many times that it seems ridiculous even by my standards. Some were bland, some were an odd color, almost all of the first three batches were as heavy as a lead…thing. But finally somewhere around batch six, we got there.

Waffle success is in your future

A few things I picked up during this arduously long testing process:

And with that I believe your holiday breakfast needs are managed. However if you’d rather go the route of my childhood, just top an eggo with a slice of canned cranberry sauce…that’s the same, right? 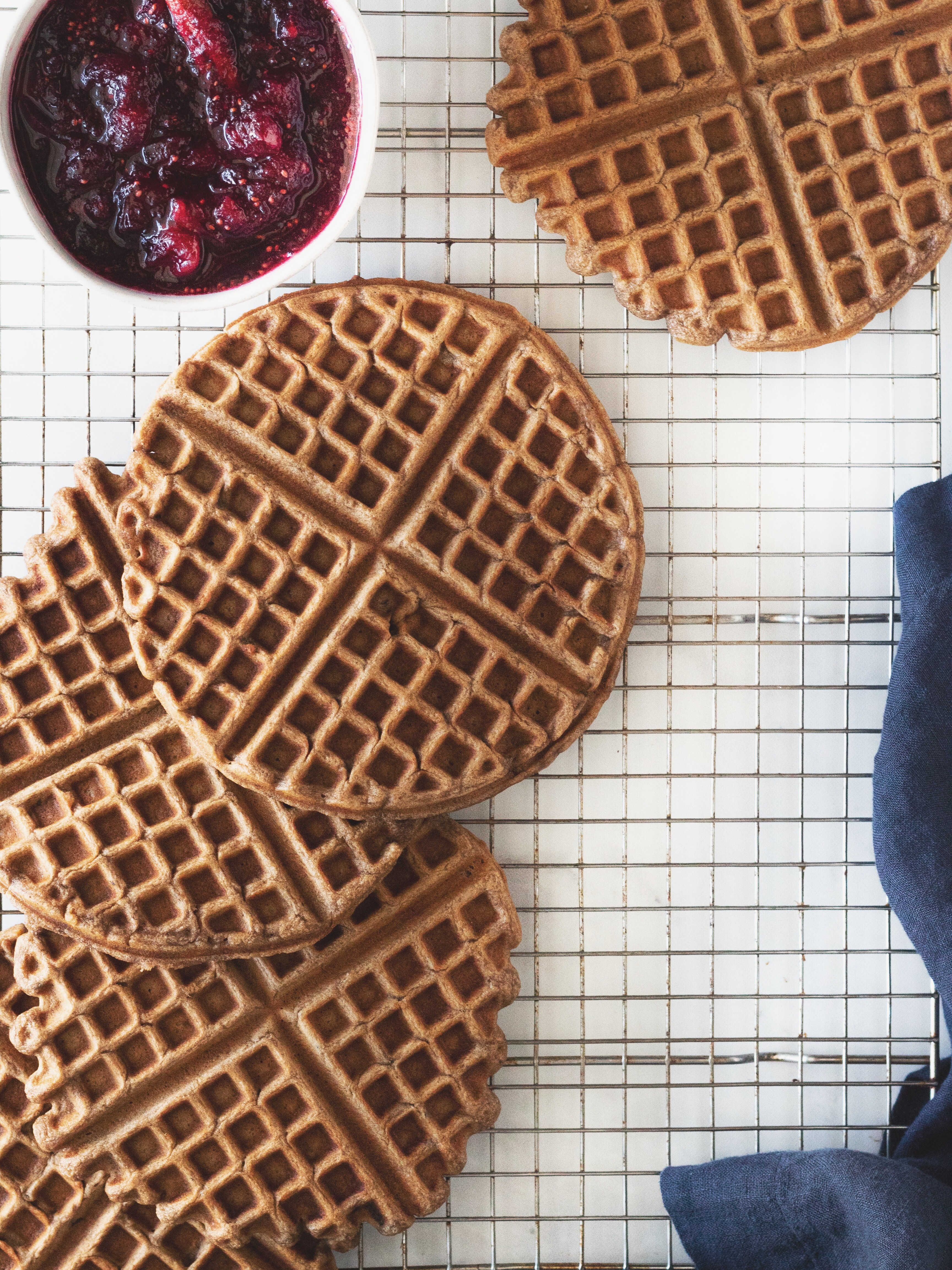 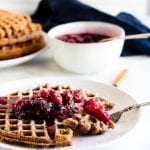 This is the warm, cozy, comforting, holiday breakfast you’ve been waiting for all your life. And honestly everything’s better in waffle form, amirite?

For the Cranberry Maple Compote:

Place the egg whites in a very clean bowl and set aside.

In a smaller bowl, whisk together the egg yolks, molasses, brown sugar, buttermilk, and vanilla

Using a handheld or stand mixer beat the egg whites just until stiff peaks form (err on the side too soft rather than too stiff here).

Gently fold the egg whites into the batter until no white streaks remain.

Grease your waffle iron and cook a generous ¾ C of batter at a time. This will of course vary depending on the size of your waffle maker.

Keep waffles warm in a 250°F oven while you repeat with the remaining batter.

Combine all ingredients in a saucepan over medium heat.

Bring to a boil, reduce heat to medium low, and cook for 8-10 minutes stirring occasionally.

The compote will thicken slightly as it sits.

Waffles will be a little soft straight out of the iron, but they will crisp up as they sit. 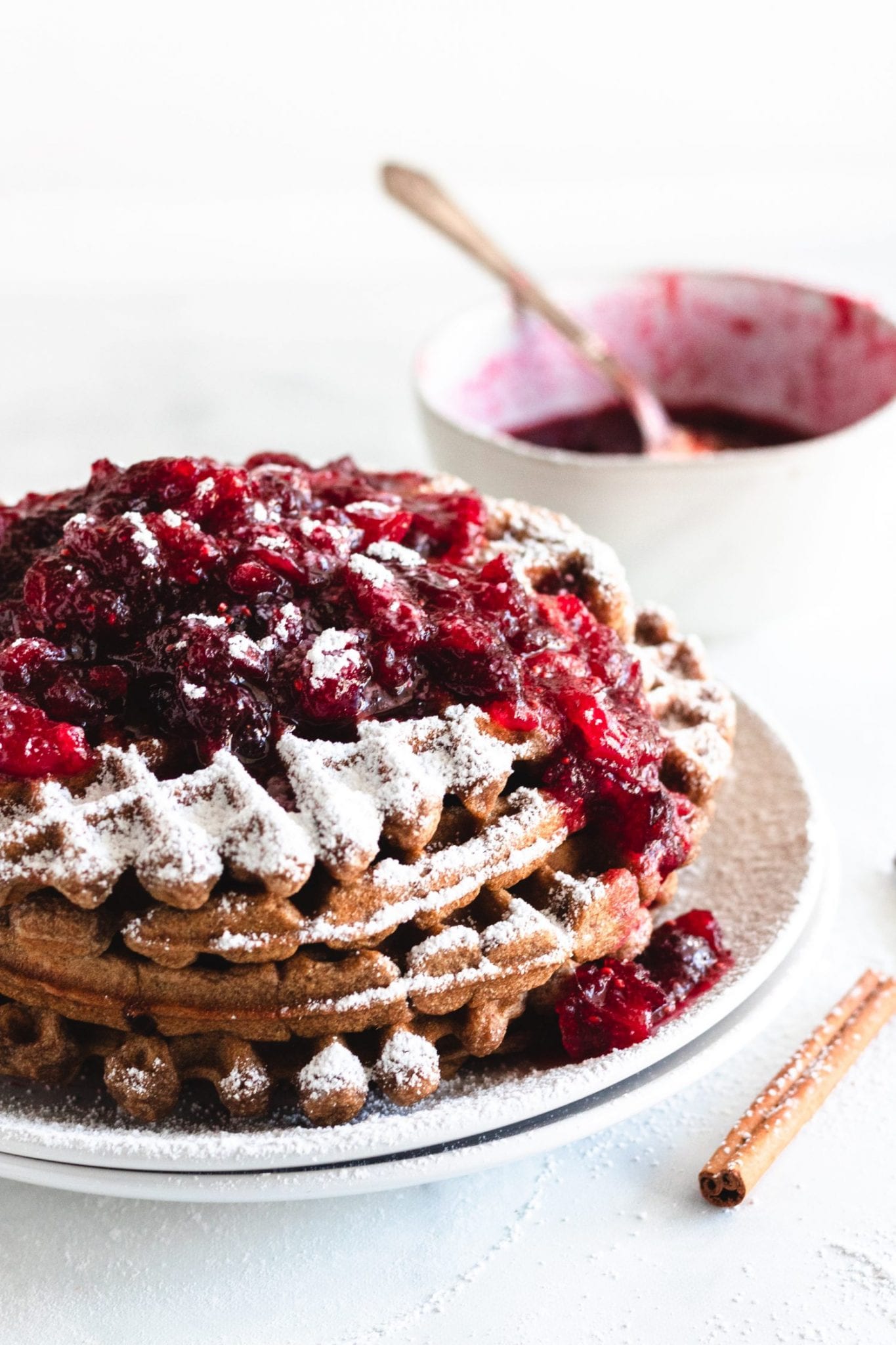 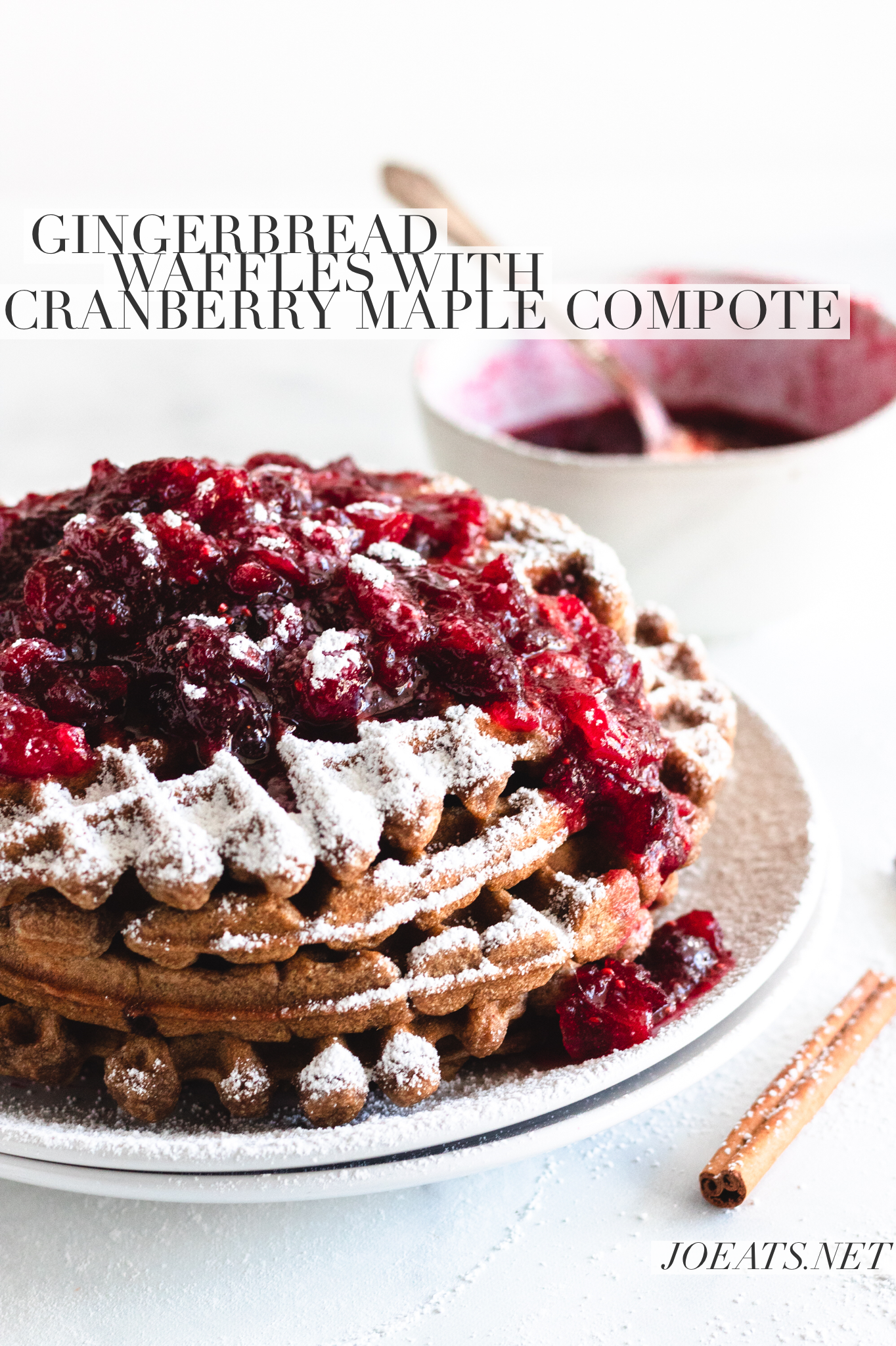