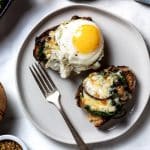 These open faced mushroom melts are vegetarian comfort food goals. Get this hearty, healthy, and cheesy recipe on the table in under 3o minutes.

Heat olive oil in a large skillet until shimmering. Toss mushrooms in oil and spread into an even layer. Cook undisturbed for five minutes. Toss and cook for another 2. Add salt, pepper, thyme, and spinach. Cook until spinach is wilted. Add balsamic and cook for one more minute. Remove from heat.

While mushrooms cook lightly toast bread. Cut open a clove of garlic and rub it against the toast on one side. Spread each piece of toast with mustard, pile on 1/2 C of mushroom mixture, cover with cheese. Broil for 5 minutes, or until cheese is melted and bubbly.

Fry eggs and serve along side or over top.

Letting the mushrooms cook without touching them and not salting them too early both promote browning, and brown is where it’s at.

If you need a quick egg frying technique that works EVERY time. Check this one out.