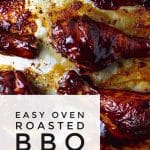 Oven roasted barbecue chicken is sweet, juicy, flavorful, and so easy you’ll never even have to fire up the grill. 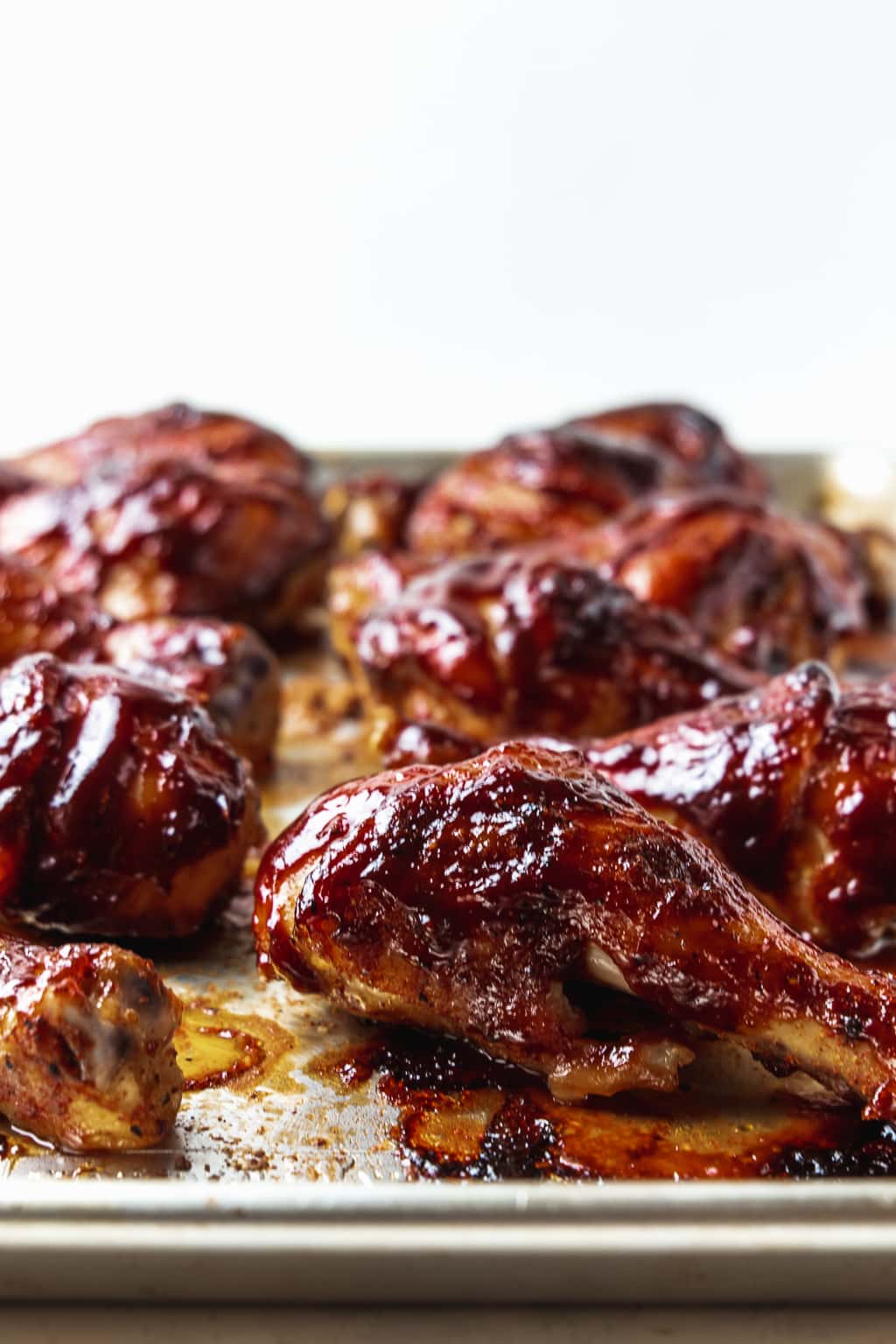 You know when you really want to do the cool thing, but you end up doing the practical thing instead? Yeah, I’m living that scenario pretty hard right now. As I type this I’m sitting in a coffee shop in Philly. That sounds pretty cool, right? Not exactly. Context? Sure. I have dinner plans later tonight with a friend and figured I’d come in early and work in a coffee shop for a change of pace. When I made these plans (last week sometime) I imagined myself newly bespectacled, sitting in a cozy nook, and getting distracted by the cool indie tunes and generally artistic vibe of the people around me.

But while I was daydreaming about this carefree, creativity-filled atmosphere, a little voice in my head started whispering “Yelp it”. So instead of vacuuming the living room I got sucked down an internet rabbit hole in search of the perfect, nay, BEYOND PERFECT coffee shop. An embarrassingly long time later I emerged with the realization that no such place exists. Well, to be accurate, no such place exists that satisfies my bizarre and impossibly idealized standards of a non-work-work-space.

It needs to be cozy, cool, and creative sure…but when I really got down to brass tacks (where does that saying come from  btw?) the more important features were proximity to good coffee, lots of outlets, ample seating, and solid wifi. Oh, also if it was located in a more or less practical spot in the city for my evening plans – that’d be cool.

So after weighing all the options I was coming up pretty empty-handed for a place where I could actually accomplish some work, and not just spend several dollars on a precious pour over. And when I finally found myself walking down the streets of Philadelphia (cue song here), I ended up strolling right into the…CAPITOL ONE CAFE.

I know, I know. How did I end up here? It’s not even a freaking Starbucks! It’s a coffee shop run by a bank. But you know what? It’s got good, well-priced cold brew, a nice assortment of serviceable baked goods, a great selection of seating, clean bathrooms, and ALL THE OUTLETS. Now I’m not saying that a better option doesn’t exist – but when faced with the choice of getting everything I needed in one neat (if incredibly corporate) package and not…well obviously you know where I landed.

Is this my best and most shining moment? No, definitely not. But am I ashamed? Also no. I’m a 36 year old woman who’s got shit to do and places to be. And you know what? I got a lot of work done. I was comfortable, hydrated, caffeinated, and thoroughly charged when I left, and I don’t regret it one bit. Sometimes you gotta do what works for you. 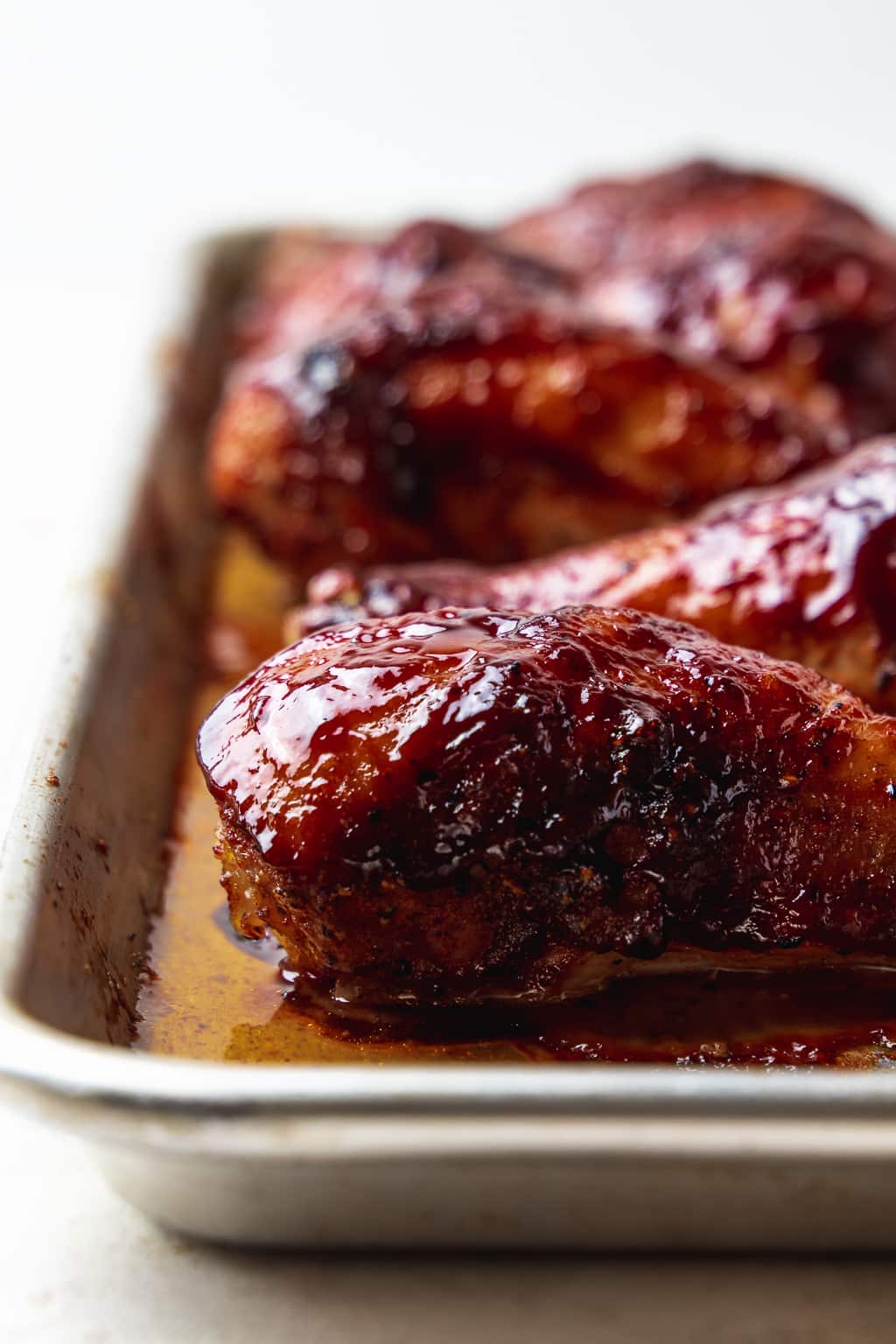 You’re thinking – what does this have to do with barbecue chicken, she’s really lost it this time. But herein lies the takeaway. Sometimes the less romantic answer is the one that works out the best. If I didn’t have a lot of work to do I surely would have chosen differently, but it was nice that the place I needed in that moment existed for me. Kind of like those store-bought short cuts that we so often malign.

So today I’m sharing my secrets to making delicious, flavorful, juicy barbecue chicken in your oven *GASP* and using your favorite store bought *DOUBLE GASP* barbecue sauce. Shall we?

I’m sure you’ve experienced this before: barbecue chicken that’s impossibly delicious ON THE OUTSIDE. But once you really commit to the experience, you find bland, pallid meat underneath. It makes sense. Why would you expect something like a sauce, which is primarily used at the end of cooking, to act entirely on its own as your seasoning? So before we even get close to the sauce we’re going to treat our chicken with some three-step TLC. 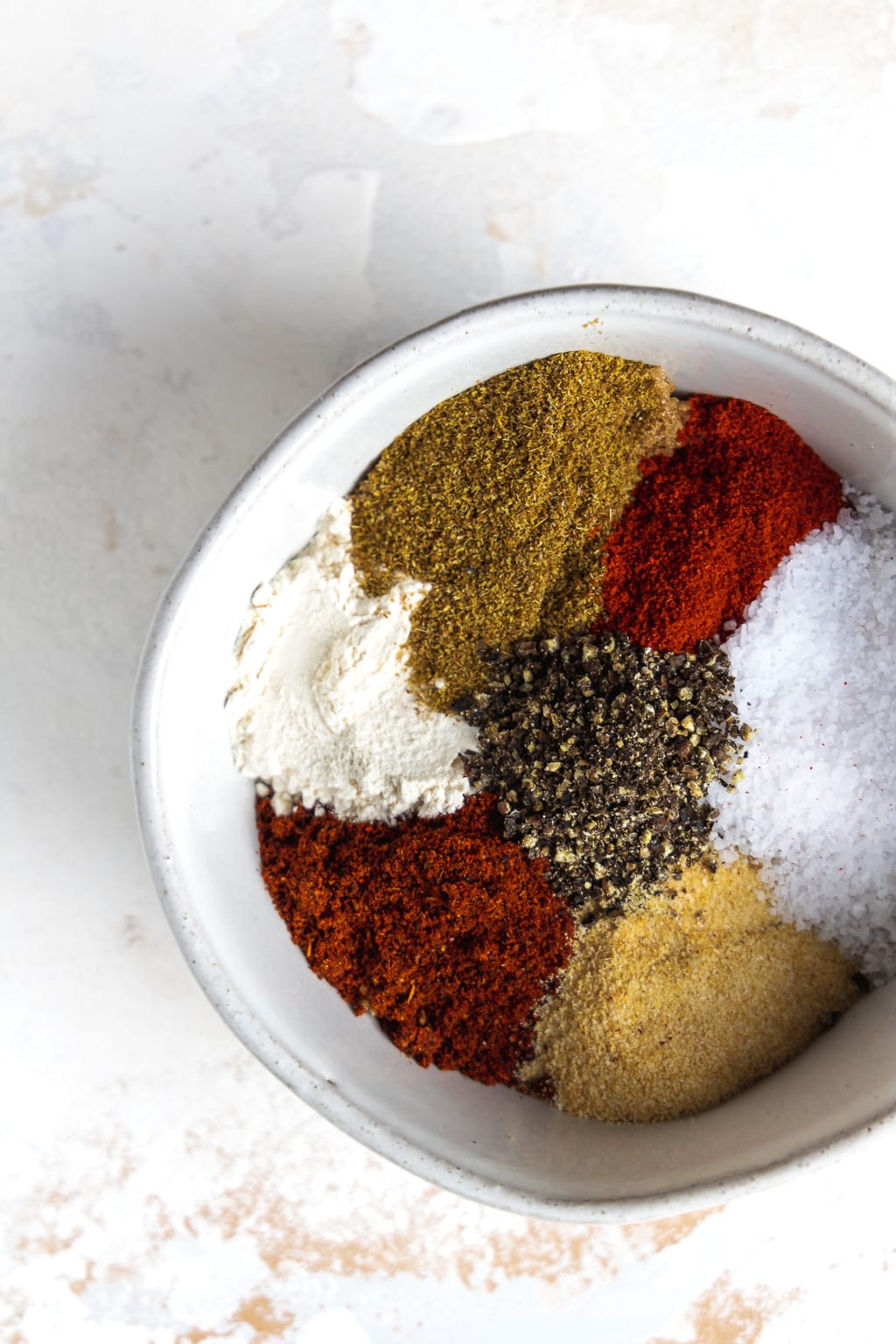 Step one: The rub

There’s a reason why true pit masters keep their BBQ rubs a well-guarded secret. It’s because the rub IS the secret. It’s the thing that permeates into the meat (be it chicken, ribs, or whatever) and makes each bite taste out of this world amazing. So basically, it’s pretty important.

Normally some combination of salt, sugar, herbs and spices go into a spice rub. It’s usually dry and is applied liberally to the meat and allowed to sit. Obviously it flavors the meat, but depending on the type of rub it can also act keep whatever you’re cooking juicy and tender, which seems like a pretty sweet bonus to me. Extra awesome is that rubs can be made in a matter of minutes, and stored in an airtight container for upwards of a couple months.

Sure, making an amazing rub is great, but if you expect it to do any good it needs some time to settle in, make itself at home, stretch its legs if you know what I mean. This chicken is pretty fab if you give the rub about four hours to do its thing. But if you can plan for it, do this the night before you cook. One, it totally makes your life easier the next day, and two it gives the salt, sugar, and spices time to do their magic.

One caveat – I would avoid letting the meat hang out with the rub for more than 24 hours. You can take a good thing too far, ya know. 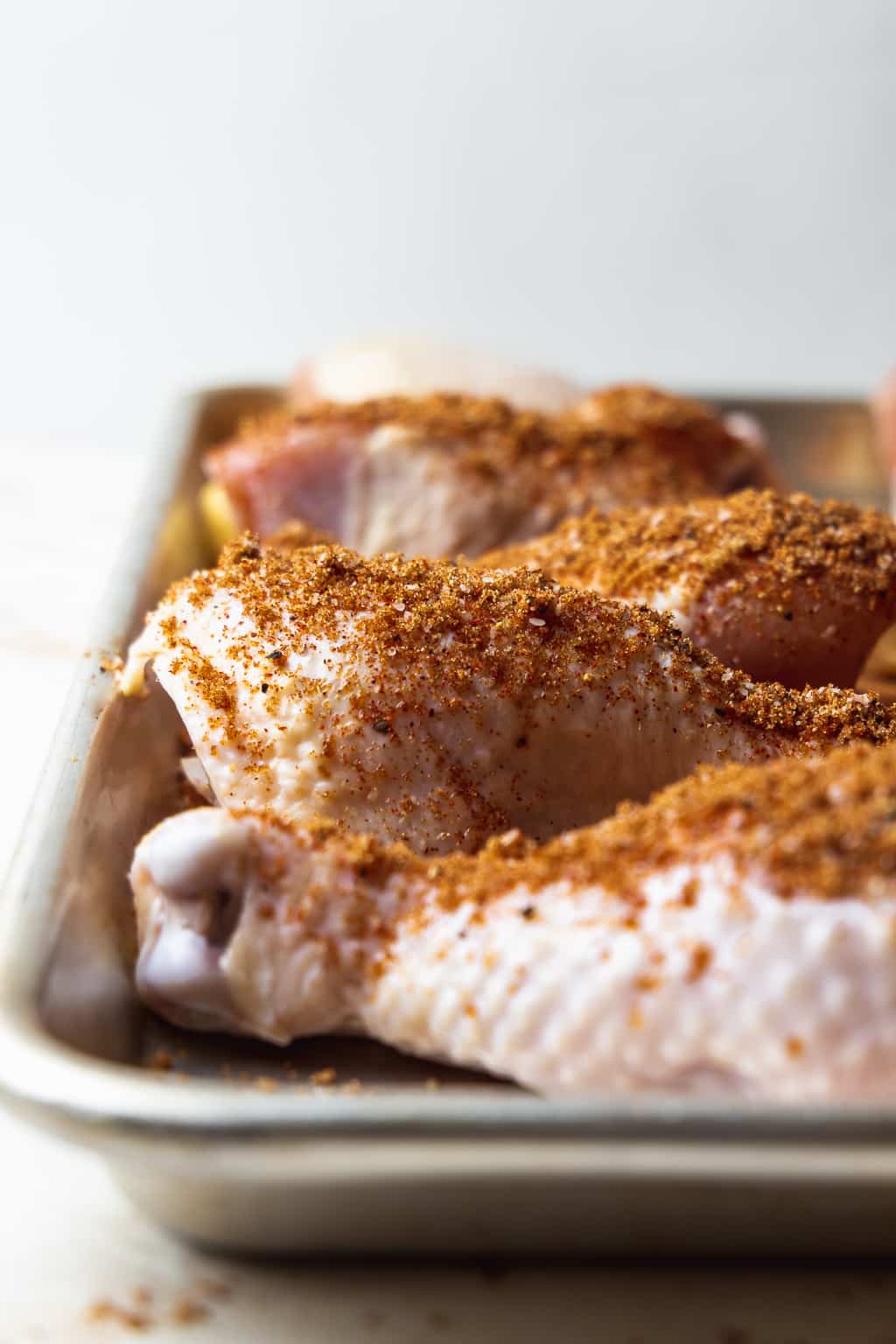 I’ll admit, steamed chicken sounds kind of blah. But cooking the chicken in a moist environment (at least for part of the time) is going to help the chicken cook faster and stay juicier. Plus, it’s easy like a Sunday morning. Cover the your chicken with a couple sheets of aluminum foil and pop it into a hot oven. Then about halfway through liberate that foil and get ready for the BEST part.

Now that we’ve tackled what’s going on underneath, let’s talk about the reason everyone really came to the party. Barbecue sauce is one of those things that I don’t feel so bad about buying instead of making. Mostly because if I were making my own I would use a lot of the same ingredients as the stuff I pick up at the store – mainly ketchup, vinegar, sugar, salt, and spices. It’s not an everyday food, but it’s totally one I’ll take the shortcut on now and then.

So pick literally whatever makes you happy. Sweet and smoky. Hot and spicy. Tangy for daaaaays! They’re all beautiful snowflakes and I literally love each and every one. But once you’ve got your sauce ready to roll what’s next? 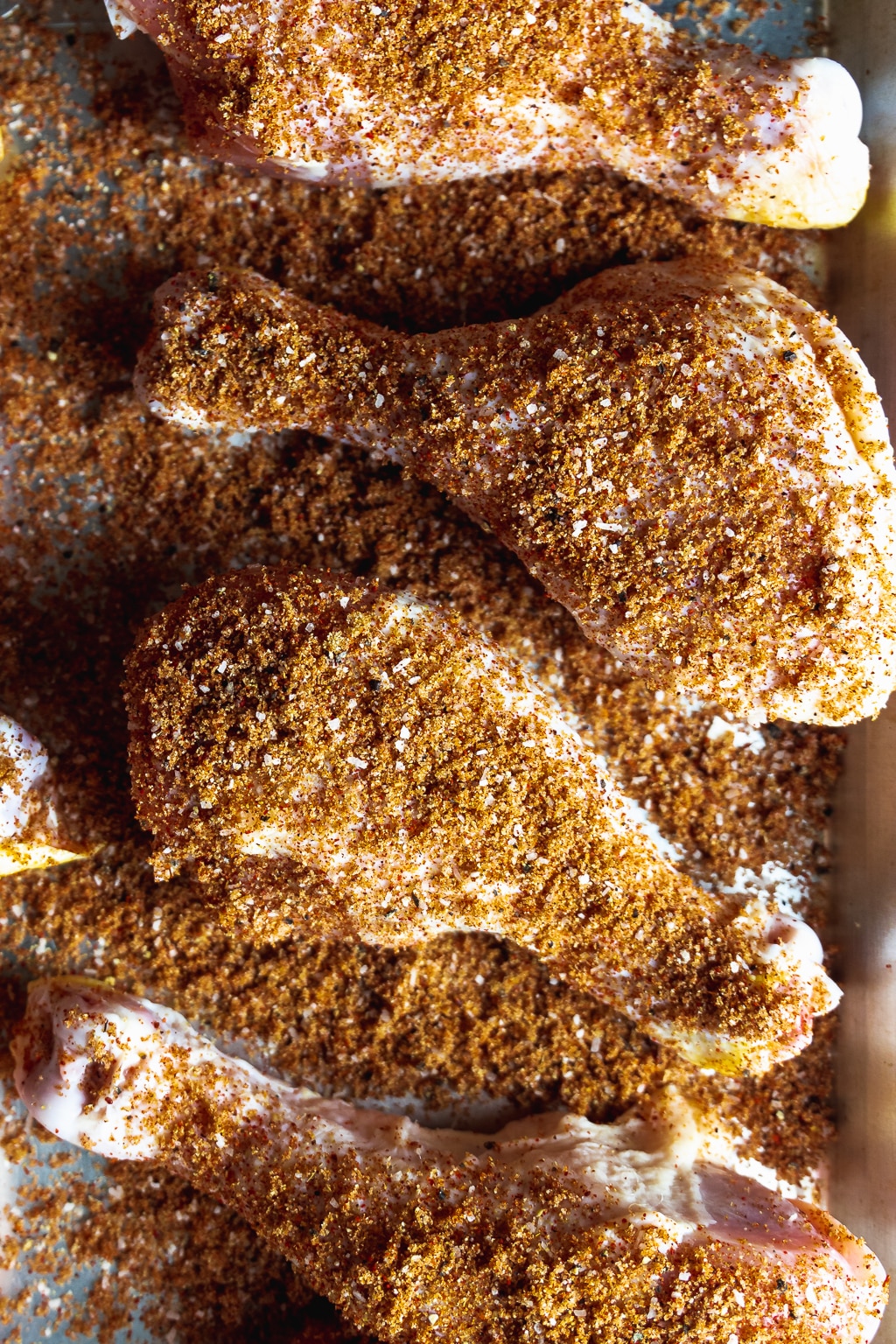 This is when sauce finally meets chicken. I like to baste three or four times over the next 20 to 30 minutes. That allows each layer to dry out a little bit, getting tacky enough to hold on to the next addition of sauce with each basting. More layers = more delicious which I’m going to go out on a limb and say is pretty darn swell.

Things to look out for while you’re basting away?

So to recap: Corporate coffee cafe’s are a-ok in my book when there’s work to be done. Store bought BBQ sauce totally has its place in my house. And saucy, sassy, to die for, BBQ chicken should definitely be on the menu this summer – even if you must make it in the oven. If you do, feel free to shout out over on Instagram. I love seeing what you’re making. Enjoy your weekend! 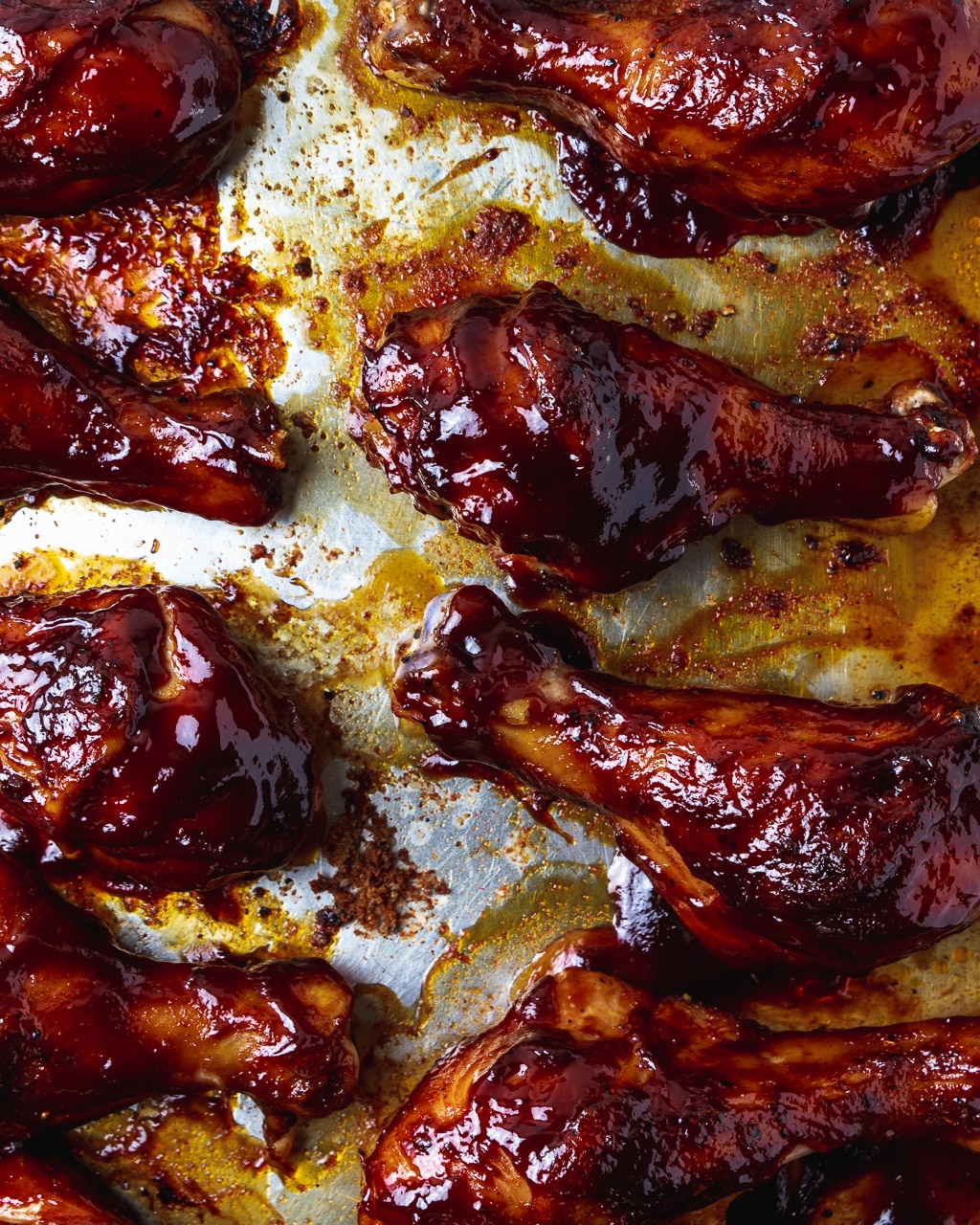 How about some more summer suppers? 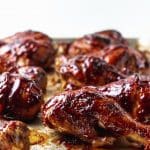 Barbecue chicken is one of summer’s great joys. This recipe combines your favorite store-bought sauce with deeply spiced, incredibly flavorful, dark meat chicken for the easiest barbecue chicken you’ve ever had.

Lay your chicken, skin side up on a rimmed baking sheet in one layer – give each piece a little room to breathe. Pat the chicken dry with a paper towel and then generously sprinkle each piece with some of your spice rub, making sure to thoroughly cover all sides and get some in between the skin and the meat. You should use it all.

Cover the sheet pan with foil and refrigerate for at least 4 hours and up to 24.

And hour before you’re ready to cook, remove the chicken from the fridge to come up to room temperature. Preheat your oven to 400° F.

Bake the chicken with the foil still on for 30 minutes. Then remove the foil and cook for an additional 25-30 minutes. During this time baste liberally with barbecue sauce, three or four times, until chicken registers 170° F on an instant read thermometer and the sauce begins to caramelize.

Let rest for at least five minutes before serving.

You can also use chicken thighs here, but I’d avoid breasts.

If you don’t have an instant read thermometer you can just cut one of the legs open to make sure the juices run clear, but the meat is in there plenty long enough to be cooked through.

If the outside is starting to get too brown before the inside is cooked, lower the heat to 350° F and continue to cook.