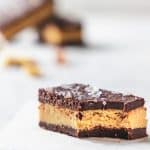 These no bake crispy peanut butter bars are an addictive salty sweet treat that are criminally easy to make, share, and devour.

Lightly grease with non-stick spray and line an 8×8 baking pan with two pieces of parchment paper, cut to fit the width of the pan with some overhang on all sides. Set aside.

In a bowl, combine the chocolate and heavy cream. Microwave in 30 second intervals, stirring in between each one, until chocolate mixture is melted and smooth. Pour half the chocolate into the prepared pan and tap the pan firmly on the counter to spread it evenly all the way to the corners. Transfer to the fridge to chill.

While the first chocolate layer sets, place the rice cereal in a large zip top bag and crush with a rolling pin until it looks like fine breadcrumbs. Set aside.

Microwave peanut butter in a large bowl for 30 seconds or until it begins to melt and reaches a pourable consistency. While it’s still warm quickly mix in the powdered sugar and rice cream crumbs until combined.

To cut and serve, remove the entire candy slab from the pan by pulling up on the parchment paper overhang. If it resists use a paring knife to loosen the edges and corners. Then cut into 1 x 2 inch rectangles using a sharp knife. Store covered in the fridge for up to a week.

If you don’t have a microwave, feel free to melt the chocolate and cream together in a double boiler (or a bowl set over a small pan of simmering water).

If your chocolate looks a little grainy instead of shiny and smooth, it’s OK. Your candy will still taste awesome. But you can avoid this by not overheating your chocolate mixture (which usually causes it to split) or by using a chocolate with a lower cacao percentage, ie: not the deepest, darkest chocolate bar in your pantry.