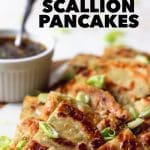 Super Flaky Scallion Pancakes are a crunchy, savory, golden brown snack that you will want to make again and again. 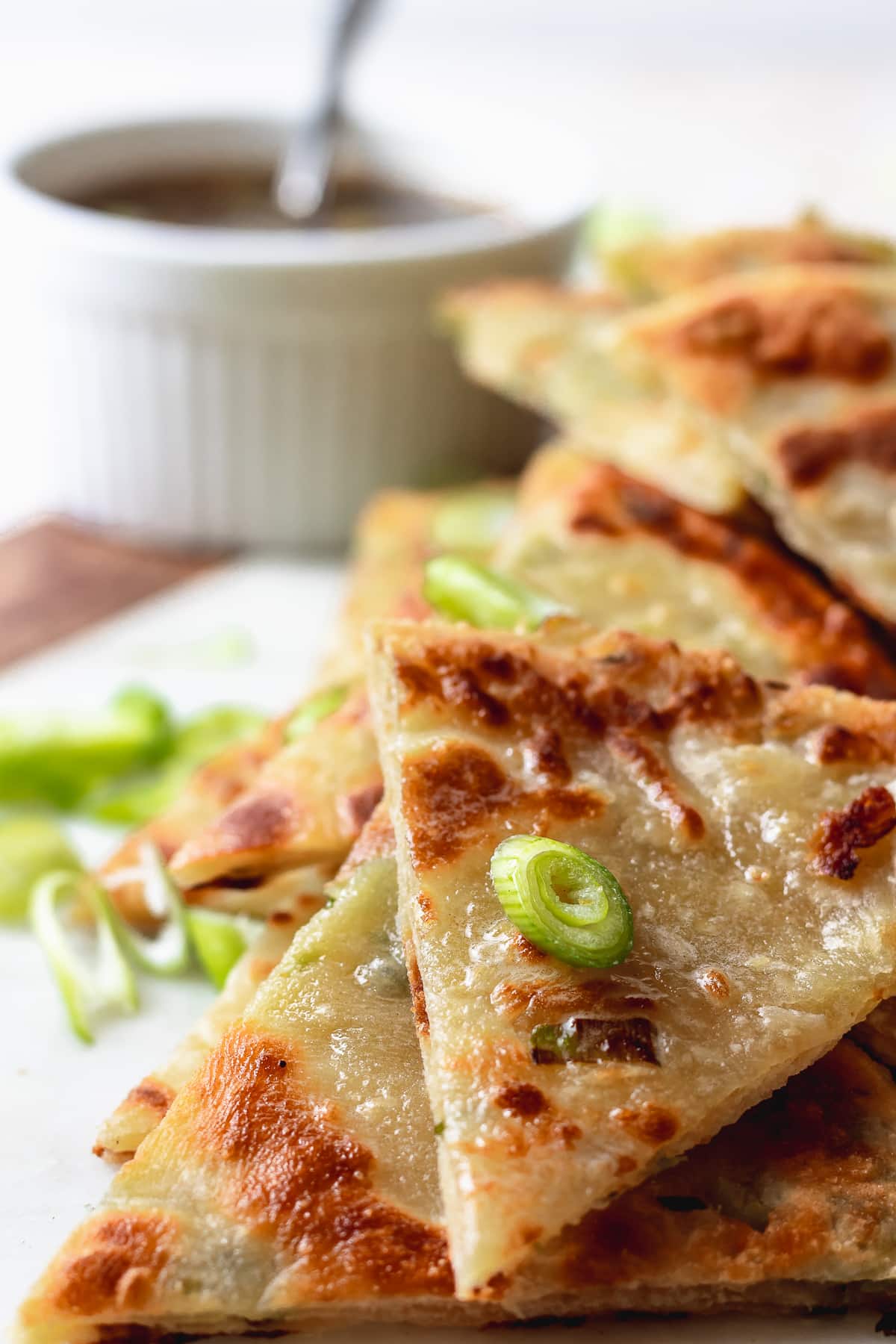 This post was originally published on February 12, 2018. It has been updated with new content and photos. Enjoy!

Let’s flash back Friday for a second, shall we? These scallion pancakes were one of the OG recipes on the blog. They were adapted from a Serious Eats recipe that I knew and loved many times over.

When I first started blogging it was really about doing something creative after a long period of stagnation in that area. It had been a few years since I called it quits on the acting biz and to be honest, it was a very hard transition. Even though I knew leaving that part of my life behind was what I truly wanted, I still went through a period of mourning for a thing that I sunk ten years of blood, sweat, and tears into. It was harder than I thought it would be, and in that moment I pretty much turned my back on anything creative. But one day my little heart started shouting. It needed to make something. And so began the blog.

At first it was an odd chronicle of stuff I ate for breakfast or lunch as well as my thoughts on food and life in general. But as the days went on (and yes, I used to post daily because I’m a nutter who apparently had lots of time and creative energy to burn), I felt more inspired to share recipes. 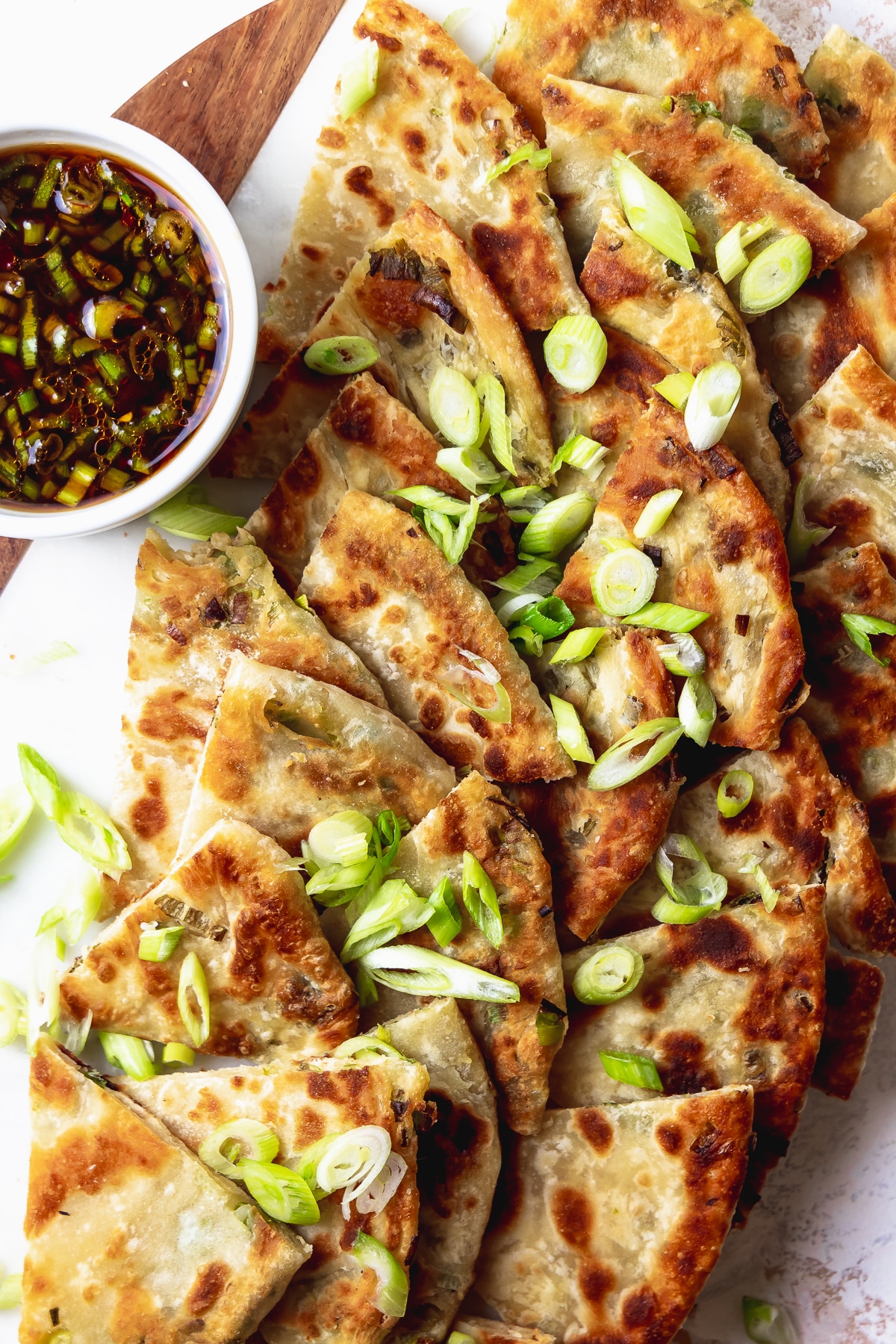 Some of those early recipes were very loose. A little bit of this, a dash of that. None bore any amount of real testing so to speak. While others were slightly tweaked versions of ones I had been collecting from blogs, magazines, and books over the years – just like these scallion pancakes.

Serious Eats is a behemoth of a food blog that was started by Ed Levine back when food blogs were barely on the radar. It has grown to become an authority on food, recipes, and techniques. I’ve always been a fan of how they break down a topic to its smallest detail and help their readers understand why they do things the way they do.

So today I’m flashing back to these scallion pancakes, which are adapted from a recipe by the stellar J Kenji Lopez-Alt. They are as good today as they were at the beginning. Hope you enjoy!

These aren’t like pancakes in the traditional American breakfast sense. Of course you totally could eat them in the morning, but that’s where the comparisons really end. Scallion pancakes are made from a hot water dough that gets rolled in such a way as to create lots of little layers (a little like a croissant). Those layers puff up when the dough gets pan-fried, giving you a flaky, crunchy, crispy, and beautifully savory treat. 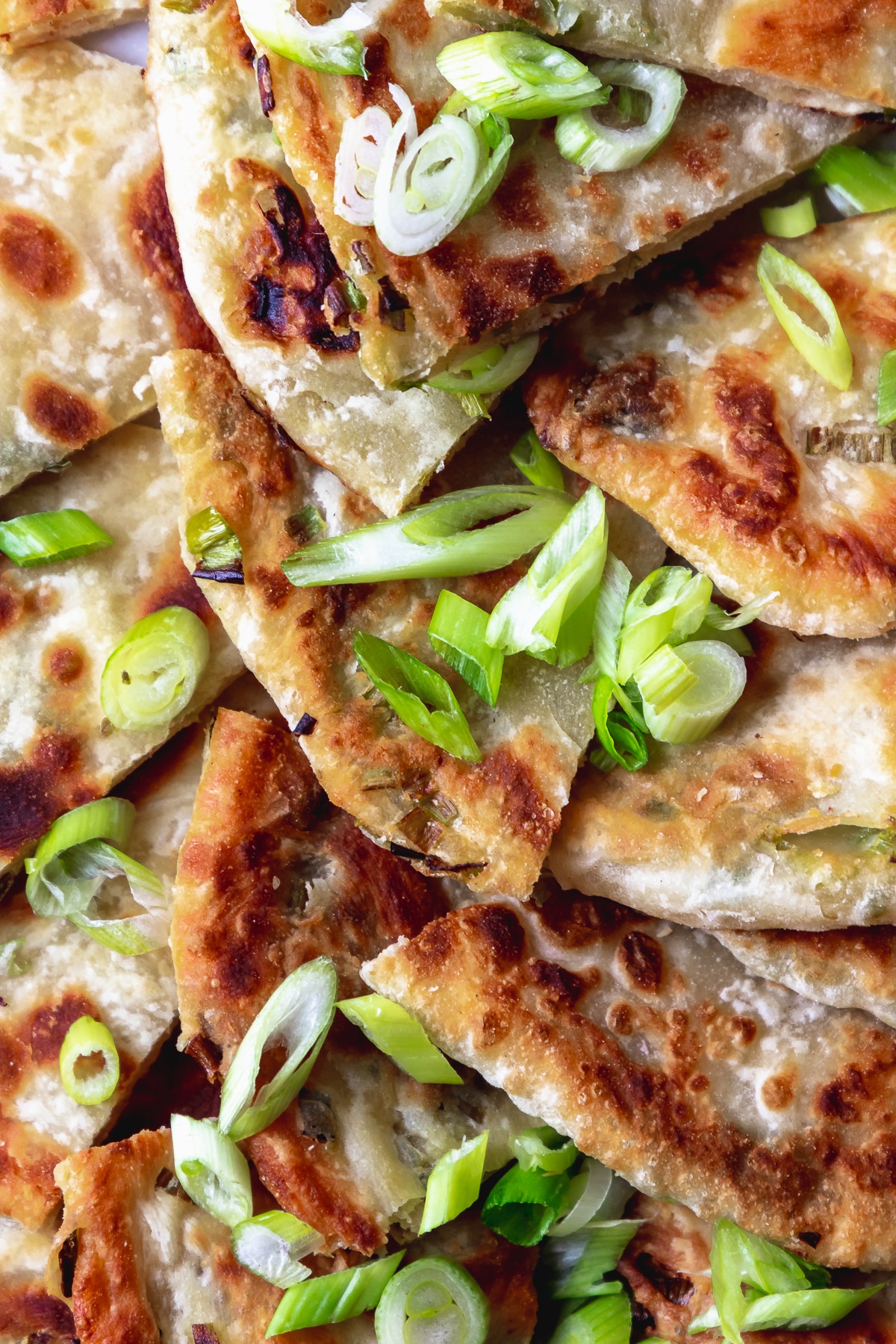 What is a Hot Water Dough?

This dough is very simple. Flour, salt, and water. That’s it. But the key here is that the water is HOT. I like to boil mine, but very very hot tap water would also be fine. The reason for the tip top temps really boils down to gluten. Gluten forms when flour and water meet up. It’s what makes bread chewy and gives baked goods their structure. In the case of a beautiful loaf of sourdough, you want high levels of gluten. But when you’re thinking light, flaky, and tender fried pancakes, less gluten is best. 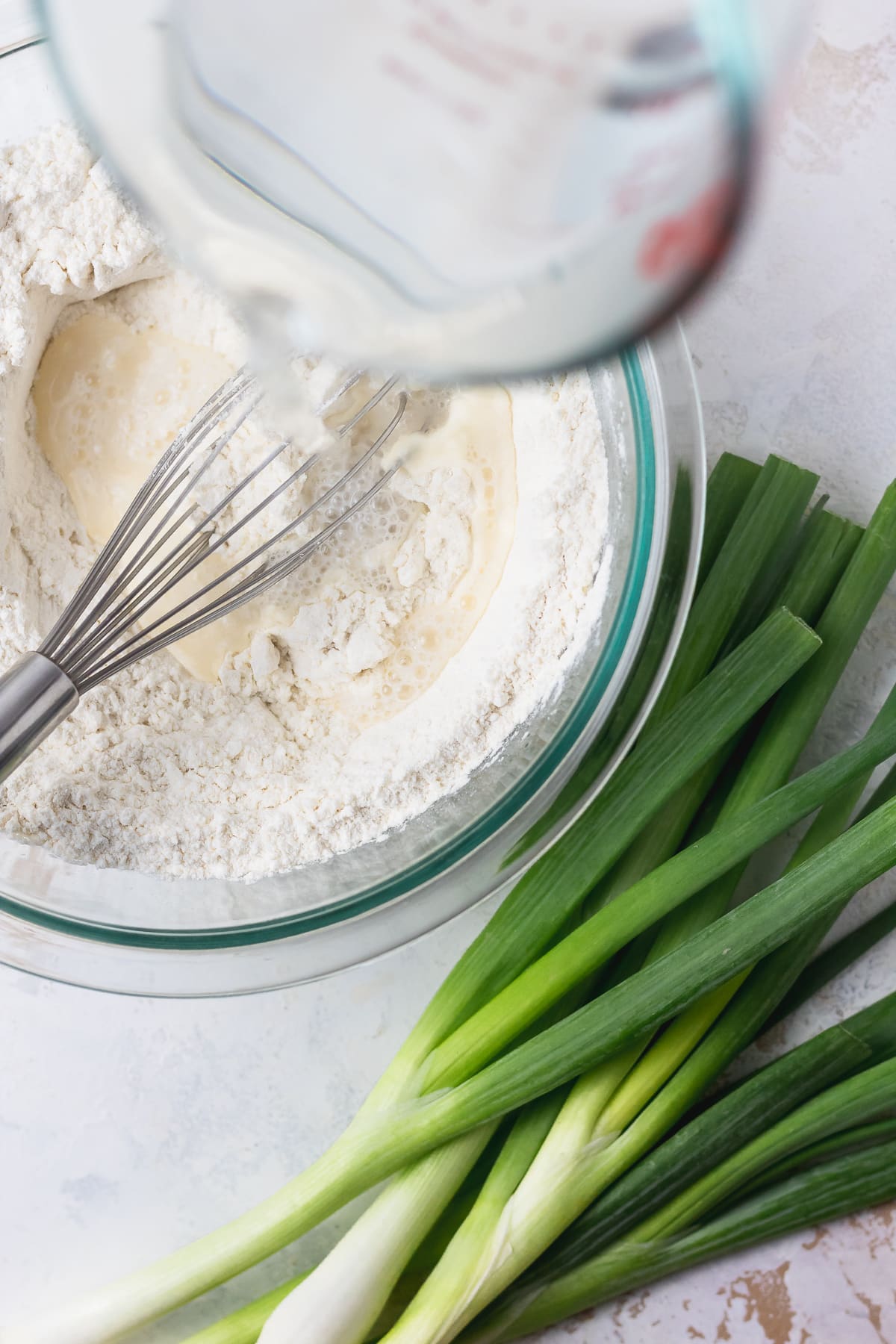 To make this dough, whisk up your flour and salt, pour the water in and stir with a spatula until no dry flour remains. When the dough is cool enough to handle, knead with your hands for about a minute. You might need to add a little more flour if the dough is too sticky, so have some on hand. Then wrap it up and let it rest for at least 20 minutes. This will give the dough time to properly hydrate, and also make it even easier to roll out.

How to Roll Out Scallion Pancakes

Along with using a hot water dough, the method to rolling the actual pancakes is what makes all the difference. It does take some time and real hands on effort, but it is entirely worth every second. Here’s a step-by-step breakdown of what to do.

How to Fry Scallion Pancakes

Once you have your pancakes filled and rolled it’s time to fry them up. First step is to preheat your oven to 250 so you have a place to keep the pancakes warm as you finish the rest. Heat enough oil to thoroughly coat the bottom of a ten inch skillet until it becomes loose and moves freely around the pan. Now you can gently lower your first pancake into the hot oil. Always make sure to lay it away from you, so you don’t risk splashing oil up onto yourself. 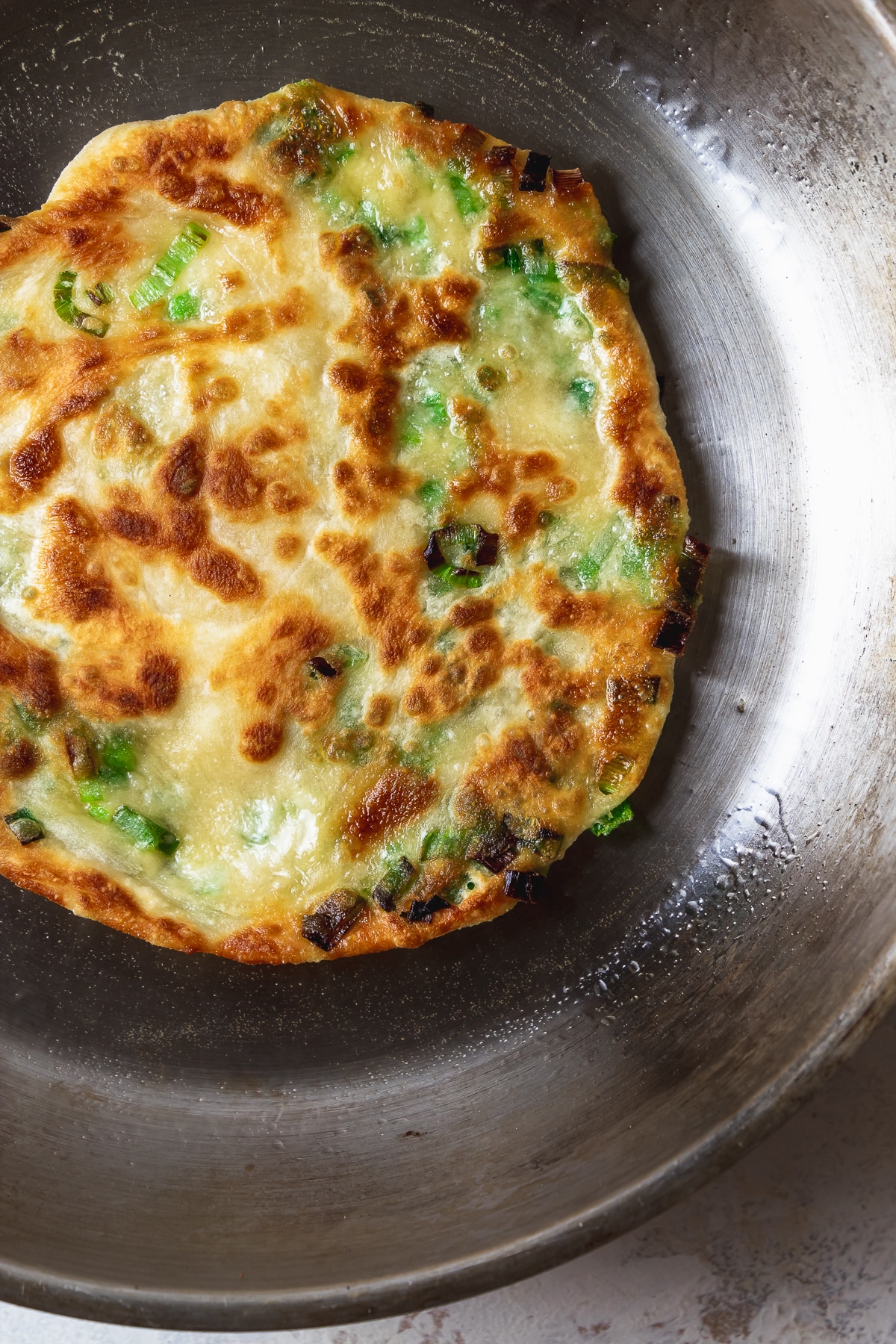 Swirl the pan so the oil gets evenly dispersed around and under your pancake. You should definitely see and hear it sizzling, but the idea is to cook at a moderate to low heat, so it gets golden brown and crispy, but also cooks all the way through. Mine usually take about two to three minutes per side. When your pancake is done, transfer it to wire rack and park it in your low oven to keep warm while you finish the rest.

Nothing crunchy, crispy, and pan fried was ever made worse by the addition of a delicious dipping sauce. This one is salty, sweet, and couldn’t be more simple to whip up. You can even make it ahead and bonus, it’s great on all sorts of things. Sometimes I even drizzle it over rice for a fast snack. 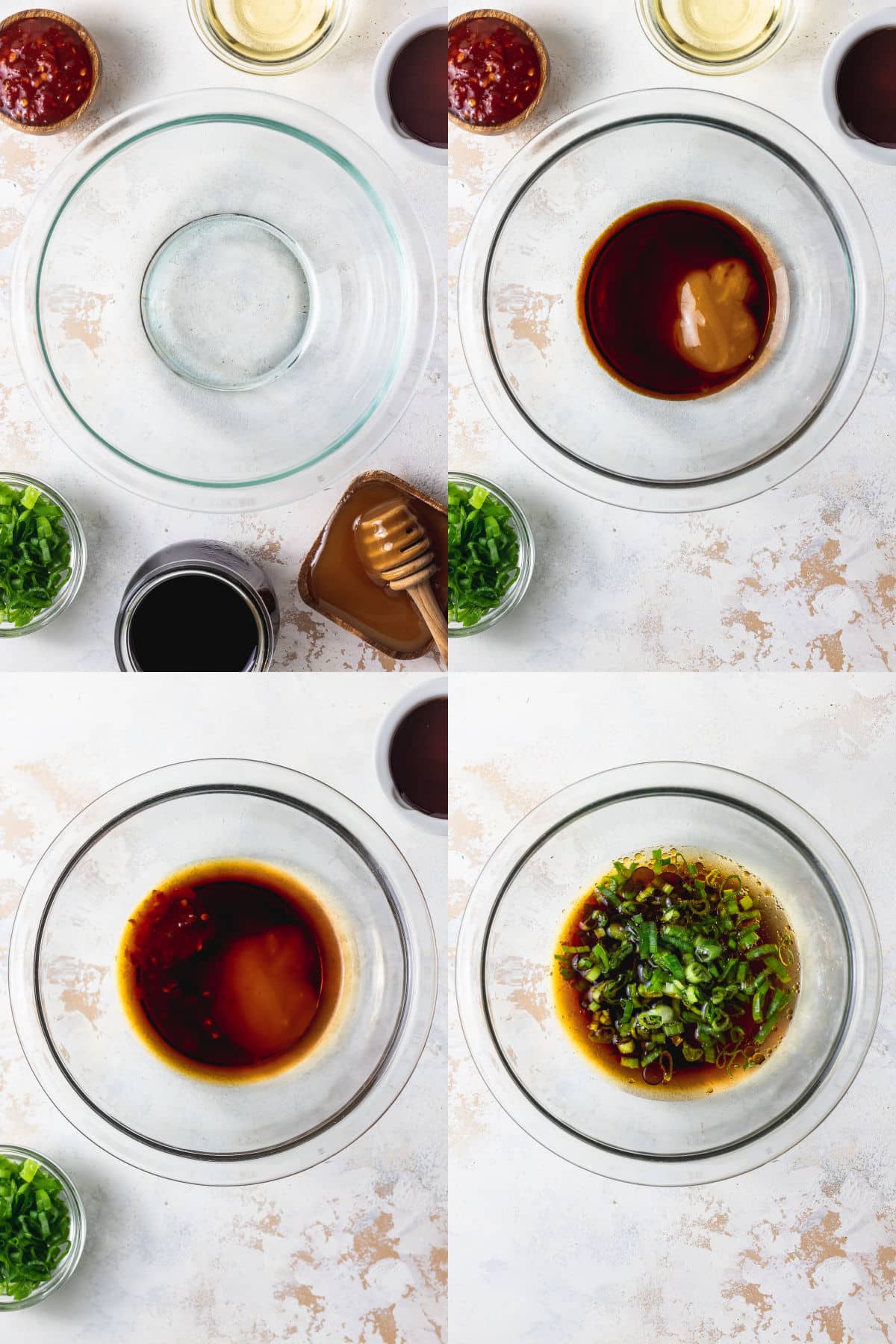 You’ll whisk up some soy sauce, sesame oil, honey, rice vinegar, chili paste, sliced scallion, and a little water. If you want you can always sub in tamari for regular soy, sugar or agave for the honey, or lime juice for the rice vinegar. Just make sure to taste and adjust the seasonings to your taste.

And as always, thank you so much for reading. Whether you’ve been here from the beginning, or you’re brand, spankin’ new today – I’m so happy to have you here! 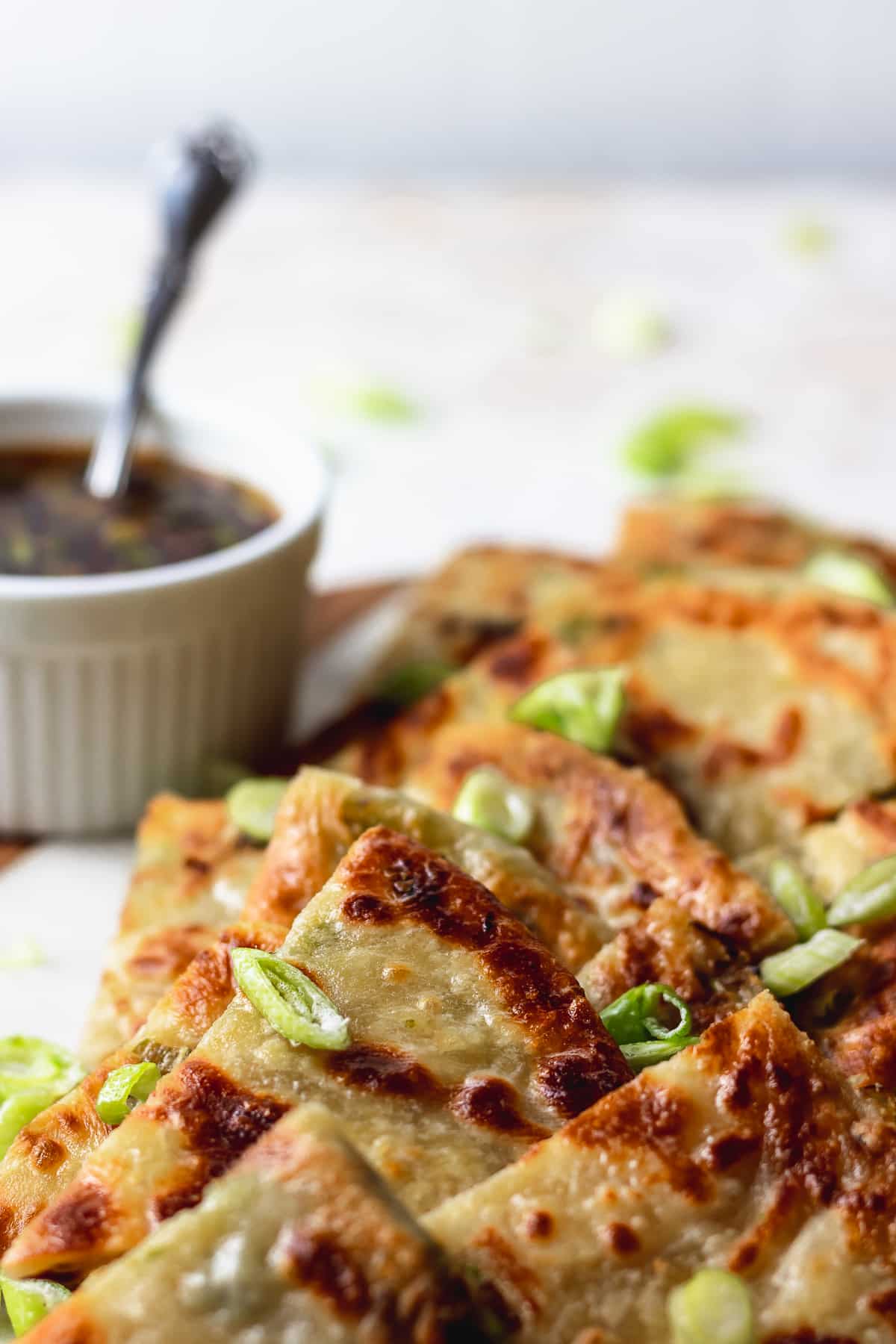 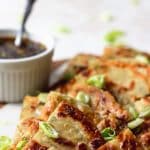 Scallion pancakes are a crispy, crunchy, golden brown snack that is so better than take out. This recipe is adapted from an old fave from Serious Eats.

In a medium bowl stir together flour and salt. Add most of the water and stir with a spatula or wooden spoon – it will be shaggy to start.

Once the dough has cooled down a bit, but still very warm to the touch, start kneading it with your hands in the bowl – squeezing the dry flour in bit by bit. You may need to add the remaining water if the dough remains very shaggy, but be patient, it will continue to hydrate as you work with it.

Once you have a cohesive ball and most or all of the flour has been worked in, turn the dough out onto a lightly floured surface and knead for five minutes.

Wrap in plastic wrap and let rest for 30 minutes.

Divide dough into 4, keeping the portions you are not currently working with covered with plastic wrap so they don’t dry out. Take one portion of dough and on a lightly floured surface roll into an 8-9 inch circle. Perfect circles are really not necessary here at all.

Brush a very light coating of sesame oil onto dough, covering the surface, then starting at the bottom end, roll the dough up into a snake. Then coil the dough into a spiral and tuck the end under.

Repeat with all of the dough, letting each dough spiral rest under plastic wrap while working with the others.

Now you will repeat this process, rolling each spiral into an 8-9 inch circle and brushing with sesame oil. Sprinkle the dough lightly with kosher salt and scatter scallions over the surface before rolling up as before into a snake and then coiling into a spiral. Set aside while you continue with the rest of the dough.

Roll each spiral out once more into an 8 inch circle.

Heat a cast iron or non-stick skillet over medium heat and add enough oil to generously coat the pan (I used about 3 tablespoons).

Fry one scallion pancake at a time, about 3-4 minutes per side, or until spotty golden brown.

You can transfer each pancake to a wire rack set over a sheet pan and place in a 250° F oven to keep warm while frying the rest.

Cut into wedges and serve with soy dipping sauce.

Keep a cup of flour on your board as you work – you’ll want to lightly flour the rolling pin and the dough as you go to keep things from sticking.