How many episodes of Fixer Upper do I need to watch before I am a certified contractor and interior design genius? I feel like I should be kind of close. Yet, I have never unboxed the circular saw my husband bought for me two valentine’s days ago and picking out throw pillows sends me into a paradox-of-choice frenzy the likes of which can only be soothed by doughnuts, pizza, and several hours of Law and Order: SVU. So the point here is that watching something is not the same as doing it.

This is true of a lot of things. You are not a writer before you write, not a singer until you belt out a tune, and not a cook unless you get in the dang kitchen. But unlike hanging shiplap and installing sliding barn doors, the cooking thing has a much more gradual learning curve. You can start today – no power tools necessary!

This salad is a great jumping off point. It’s got enough going on to make you feel like you’re really “cooking” but not so much that you want to pull your freaking hair out. Also, it’s full of juicy chicken, crisp veggies, crunchy pita chips, and a zippy dressing to bring it all together, which is to say it’s delicious. But if you disagree, well there is always plan B, which in my house means popcorn for dinner – which is still technically cooking – hurrah! 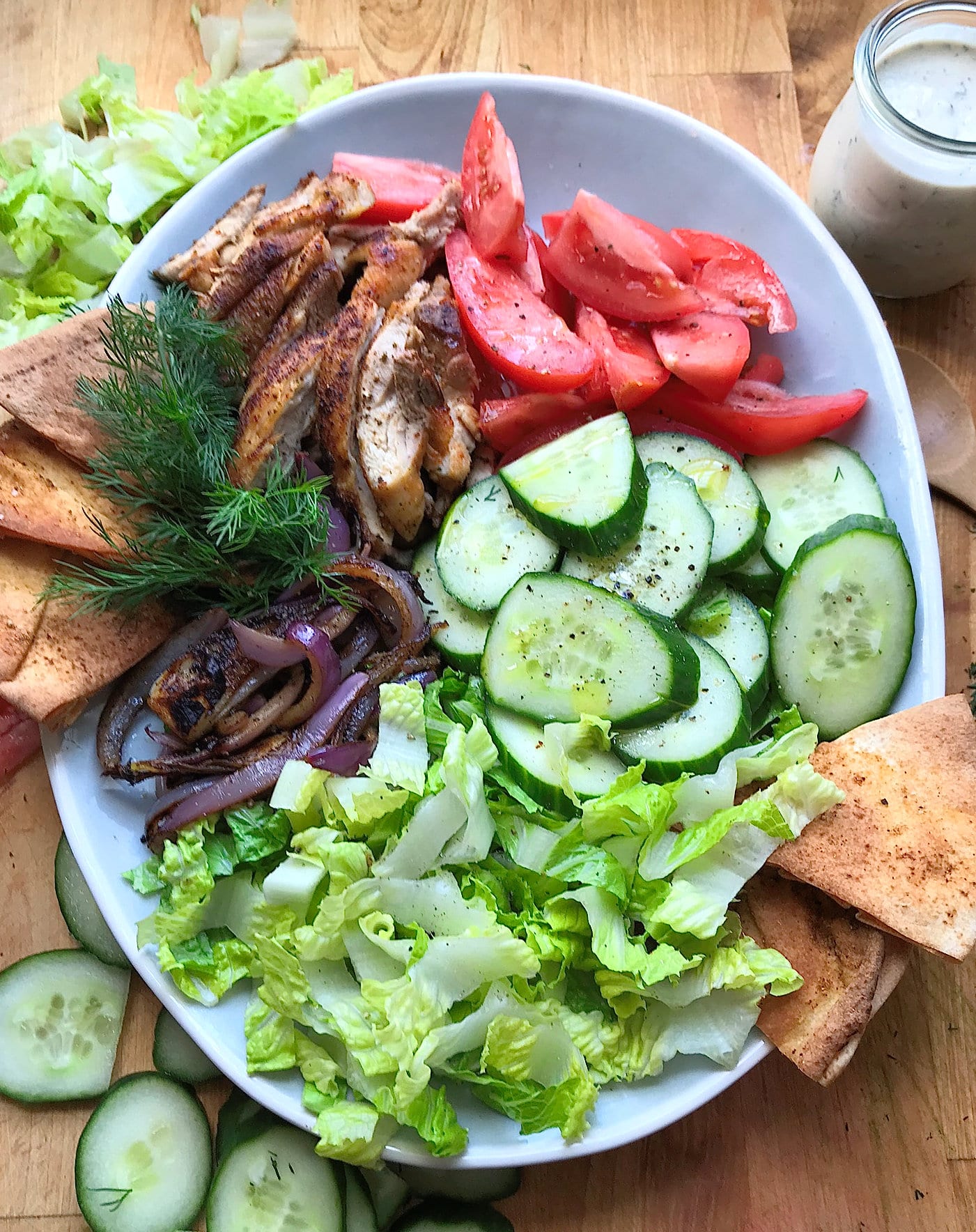 You can make the dressing (recipe below) and the pita chips a couple days in advance if you want, just hold on to the extra spice mix. This dish does take a wee bit of multi-tasking otherwise, but nothing you can’t handle. YOU GOT THIS!

Take one teaspoon of spice mixture and combine in a separate bowl with 1 tablespoon of olive oil.

Brush the spice/oil mixture on both sides of the pita bread. Then stack the pita and cut into wedges. Avoid doing what I did which was to cut the pita first and then realize that I had to brush each one individually. See me making mistakes so you don’t have to?

Arrange the pita in a single layer on a baking sheet and bake for 8-10 minutes, turning over halfway through cooking. They should be lightly brown in color and nearly crisp (they’ll continue to crisp up as they cool). Set aside.

Season the chicken on both sides with 1 tablespoon of the spice mixture. You’ll use this mixture in the dressing, so don’t pitch the extra.

Heat the remaining tablespoon of olive oil over high heat in a large skillet. When the oil is shimmering place the chicken in the skillet in one layer and cook for about 5-7 minutes or until deeply golden brown. Flip and continue to cook for another 5-7 minutes, until chicken is cooked through*.

When chicken is done transfer to a clean cutting board and set aside.

Lower heat to medium-high and toss in red onions. Cook, stirring occasionally for about five minutes, or until the onions begin to char and soften a bit. Turn off heat.

Slice the chicken and arrange on a platter (or pile in a bowl) with romaine, tomatoes, cucumber, charred red onions, and your crispy pita chips. Serve with garlic tahini dressing (recipe below).

*I realize that this is rude…how about visual cue, or a temperature, Jo? Ok so visual cue – slice it open, if it’s no longer pink it’s done. You’re going to slice it anyway for the salad so no harm done IMO. If you’re using an instant-read thermometer (which is my preferred method of not poisoning people with undercooked chicken on the regs) then it needs to hit at least 170° F in the thickest part.

Like I said up there ↑ you can make this ahead of time and stash it in the fridge for a coupla days. It’s also amazing on scrambled eggs in the morning, so do that. The bit about letting the garlic soak with the lemon juice for a few minutes is to calm down the harsh flavor of the garlic. If you’re into avoiding vampires then no need to soak, but that shiz will be strong.

Combine garlic and lemon juice in a bowl and let sit for five minutes. 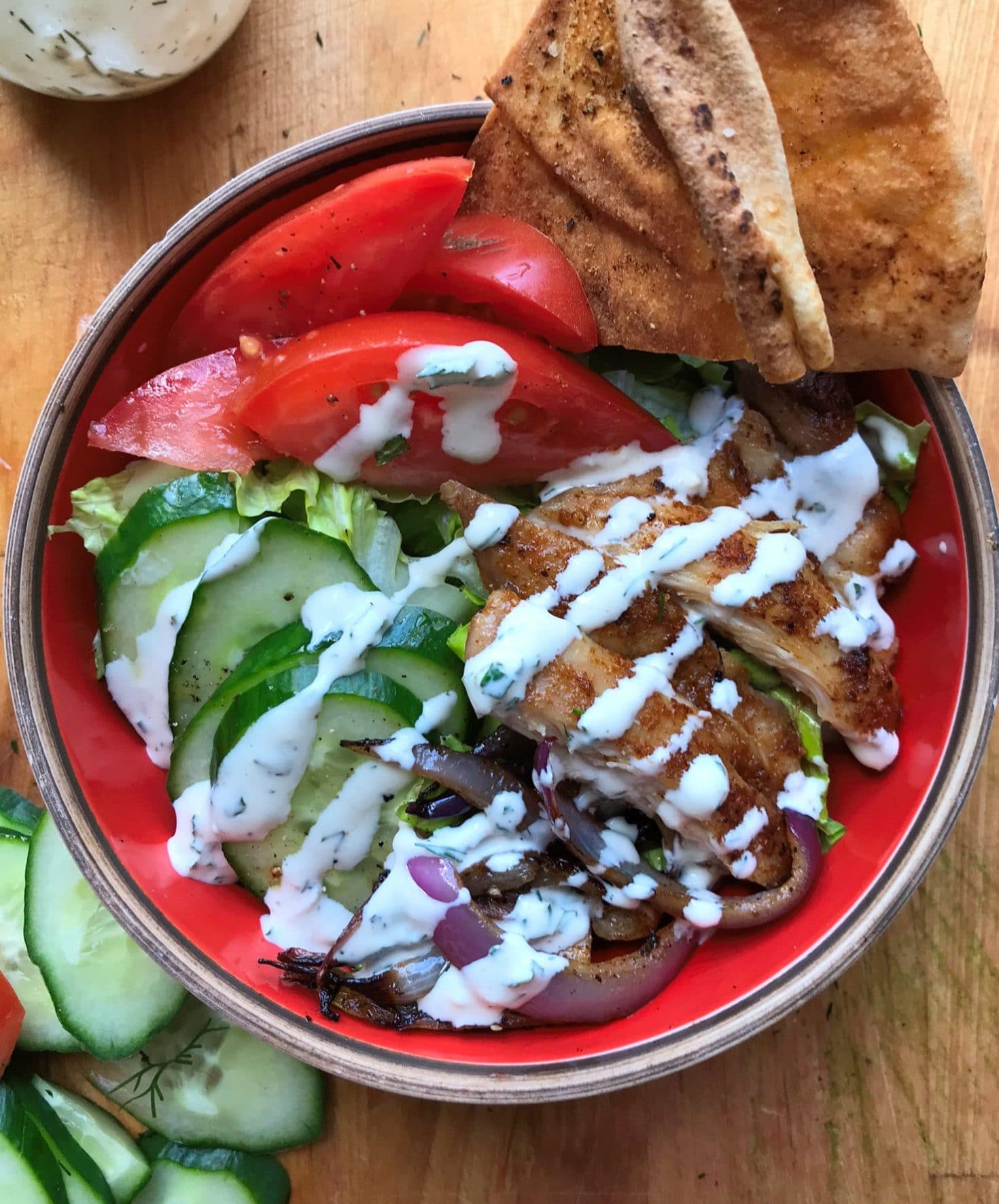 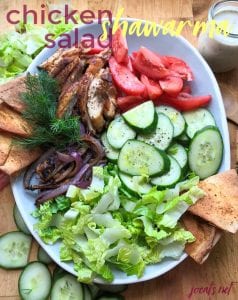