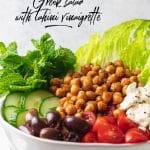 This spiced chickpea Greek salad with tahini vinaigrette is a meatless meal miracle. Packed with protein and incredibly flavorful, this easy, vegetarian, weeknight meal is on the table in under 30 minutes. 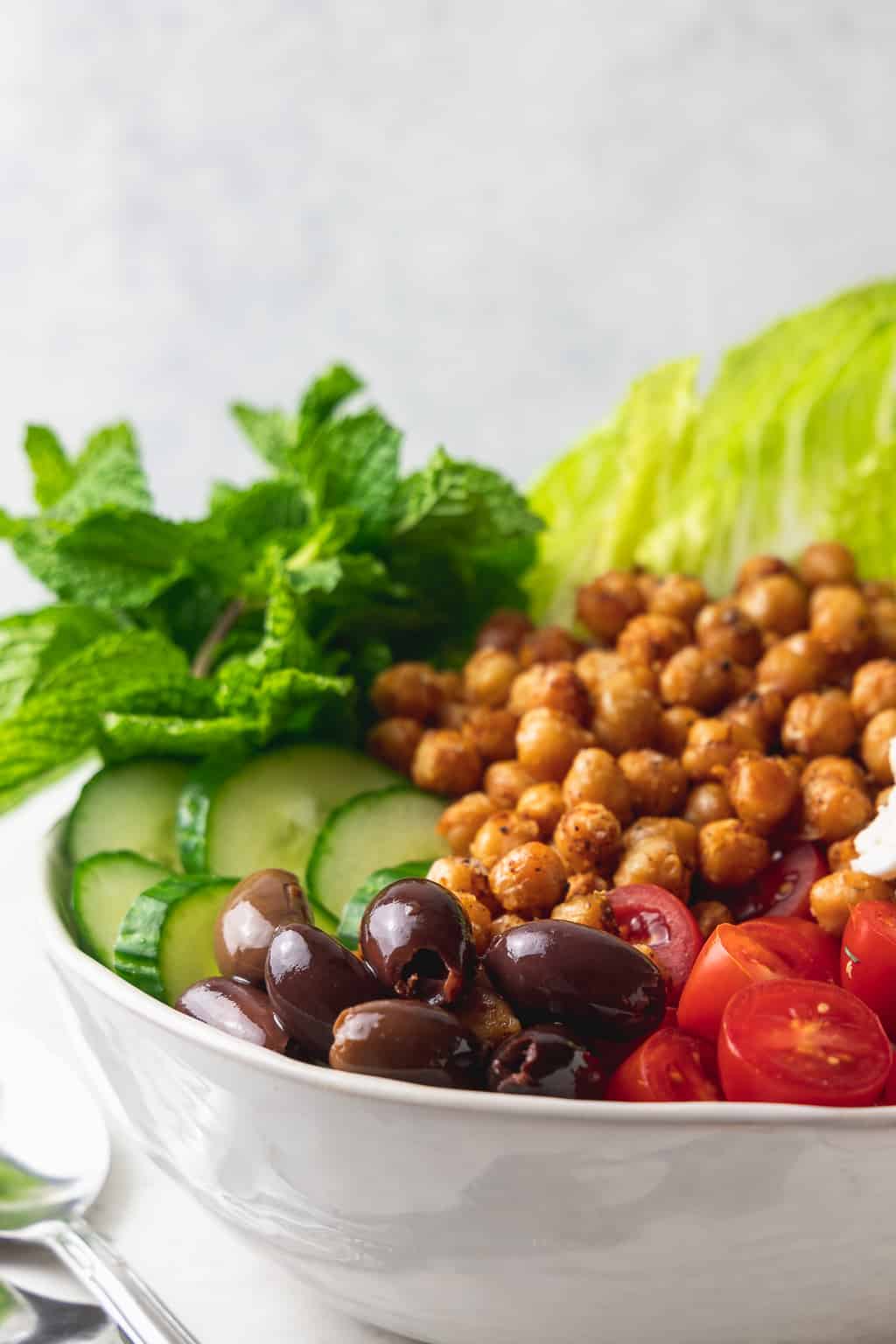 Are you familiar with the concept of a gateway salad? It’s like a drug, but for produce. I’m not talking just about the salads of your youth though, I’m talking about the first one that opened your eyes. That was a leafy green thing, mixed with a bevy of delicious toppings, and drizzled in some ethereally flavorful dressing that brought the whole magical experience together.

The salads of my youth were disappointing for the most part. There was Iceberg with bottled french dressing, gloopy cole slaw, and the weekly canned pear perched atop a scoop of cottage cheese (yes, this was considered salad – it was the 80’s). So unless a bowl of lettuce was literally dripping with sugary dressing, day-glo orange cheddar cheese, croutons from a bag, and Bacos (yeah those little bits of science masquerading as food) I was so not coming to that party. 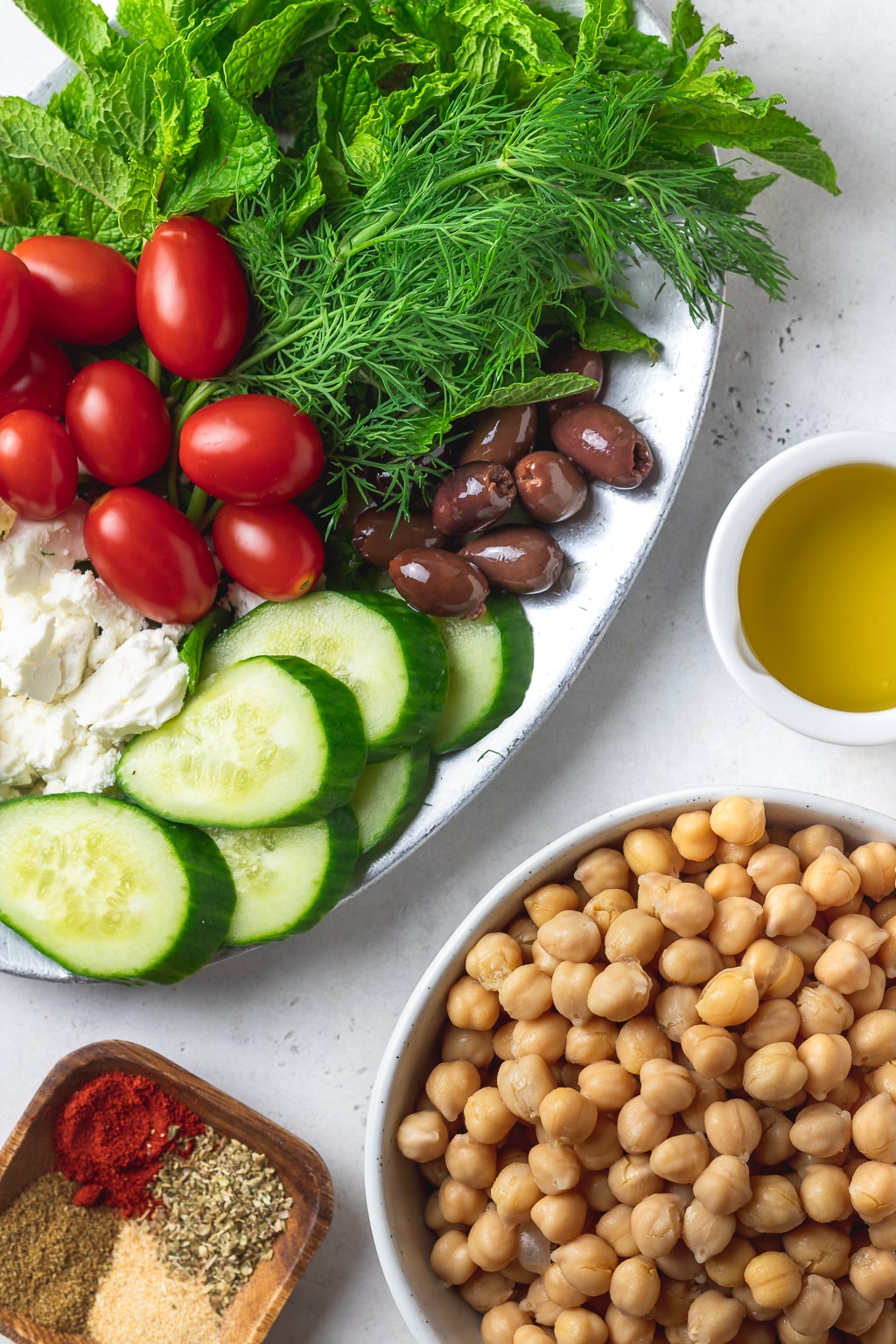 That is until I went Greek.

One day (I think at a sandwich shop) someone ordered a Greek salad. When it hit the table I was mesmerized by how different it looked. Firstly it was served in one of those checkered wooden bowls – you know, the kind that look like a parquet dance floor, except you eat out of it. But secondly – and more importantly – it had a huge slab of feta cheese sitting smack dab in the middle.

Of course, as a kid growing up in the 80’s, I had no idea what feta cheese was. But I was intrigued. I had never seen anything like it before. I guess if I were growing up now I might think it was tofu, but it would be at least 10 years before I ever laid eyes on a pressed and fermented soy bean product, so to me it was a veritable mystery. 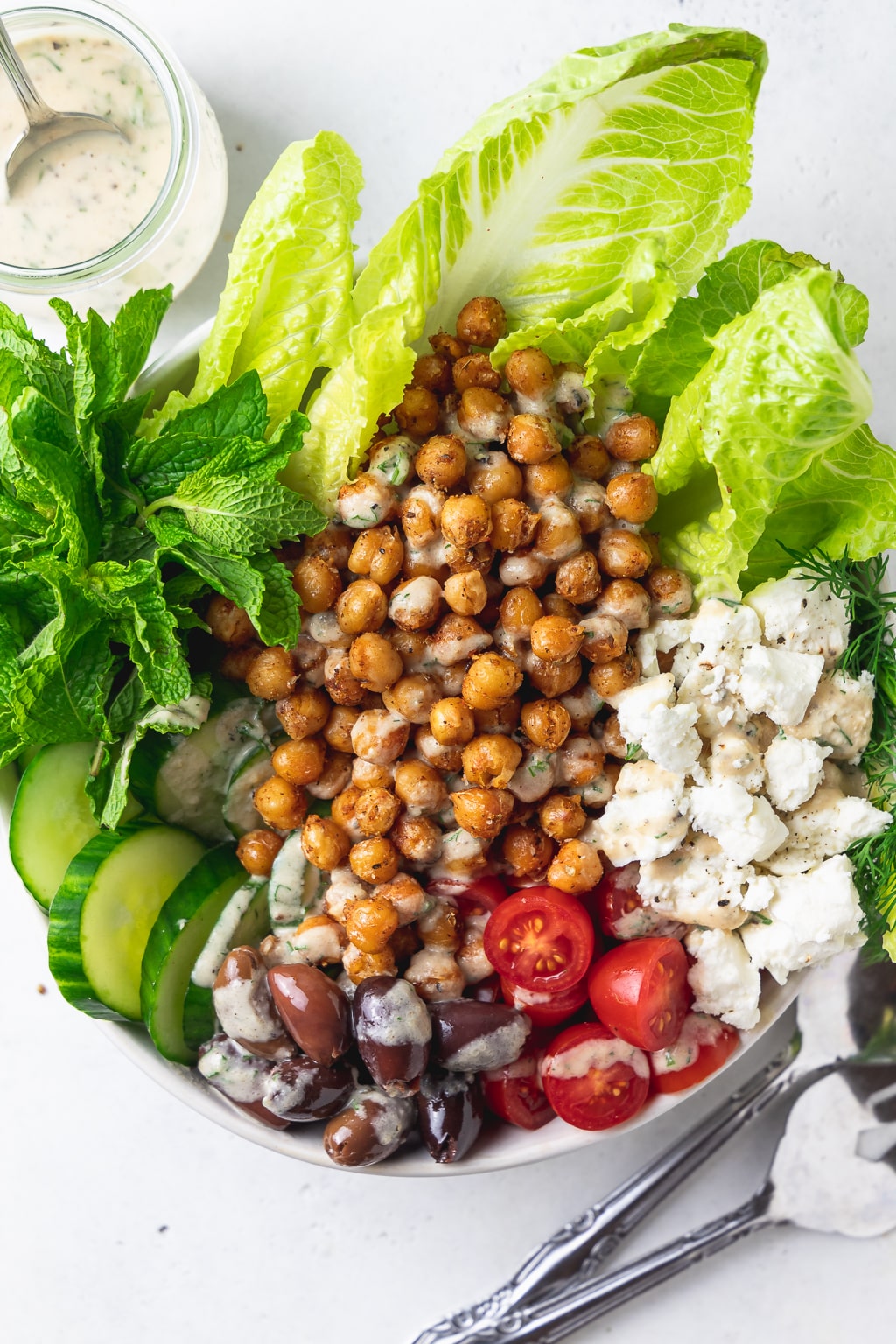 Some well-meaning adult urged me to try it. I’m pretty sure I put up a fuss at first, but eventually I began to nibble at the corner of that big block o’ feta. And WOW was I hooked. It was salty, briny, and almost squeeky at the back of my molars. But the best part was that it felt very grown up.

And so fresh on the heels of my new dining discovery I went forth to do that thing that all young kids do when they find something cool – I professed it as my ride or die, the only salad I’d ever eat. I told anyone who would listen (mostly well meaning and very patient adults) about how I ONLY ate Greek salads – what a little snot, right?

Better yet, I didn’t even really eat Greek salads. I ordered them religiously, with great fan fair, but when they arrived at the table I dove straight into my salty, feta prize and left the rest to languish. To be fair, olives and red onions and herby vinaigrette were probably batting out of my eight year old league. But my parents were good sports and put up with me ordering my Greek salads, pretty much wasting them, and being a stuck up foodie (before that even existed) about the whole thing.

Fast forward several years later and I’m no longer such a snot (I hope). I have also learned to greatly love all the other components of a Greek salad, not just the cheese. But the cheese, it’s still pretty important. 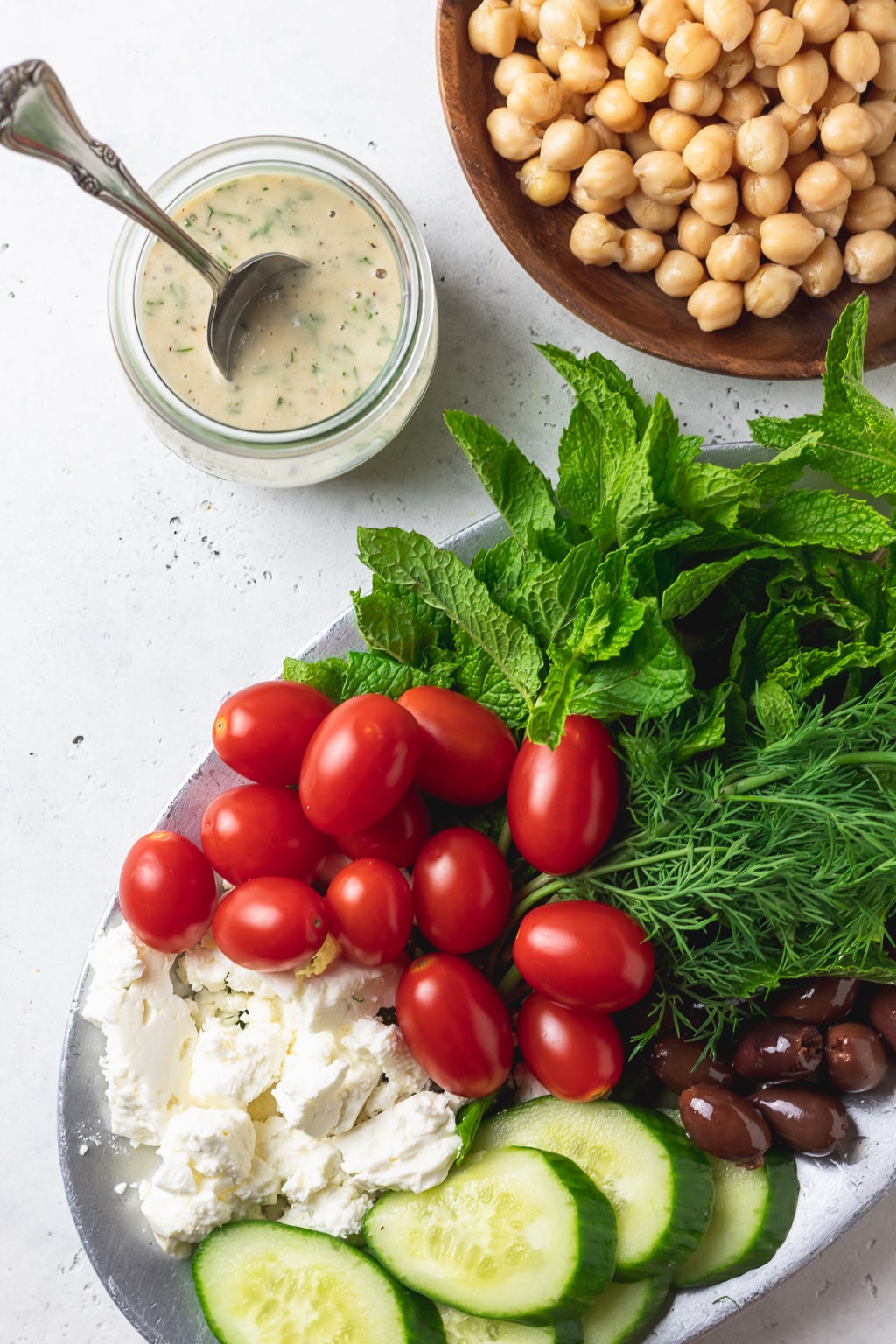 And with that I’d love to share my interpretation of a Greek salad. This is not entirely traditional (because when have I ever done that?), but it is freaking delicious. It combines all the salty, brininess of your typical Greek-Sal with some of my favorite Middle Eastern flavors. I even give it a little kick of protein in the form of spiced chickpeas, making it perfect for a light weeknight dinner, or a hearty, healthy, not-sad-desk-lunch. Oh also, the tahini vinaigrette is killer – totally worth the price of admission alone.

So enjoy the grown up version of my gateway salad. The one that paved the way for all others (that weren’t literally nutritional abominations that is). If you’re feeling nostalgic, please tell me about yours in the comments – I want ALL THE DEETS. And enjoy the hell out of your weekend!

This salad is pretty straight forward – make components, assemble ingredients, eat, repeat. But a few tips never hurt anyone right? Well, except maybe all those frosted tips, circa 1999. These are different, I promise. 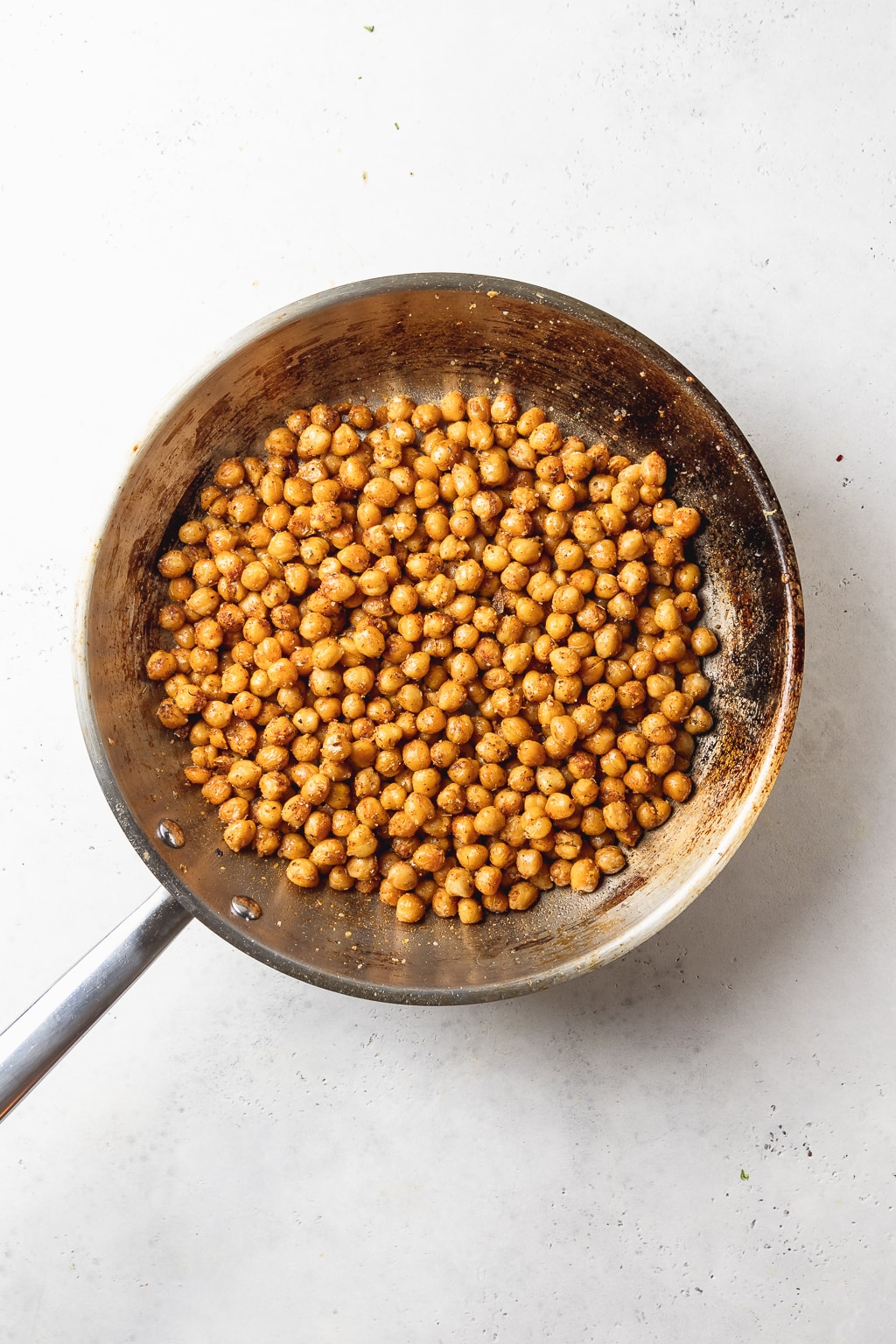 How to make spiced chickpeas

Spiced chickpeas sound kinda fancy, right? Well luckily they’re just about as easy as frying an egg – actually probably easier because there are no tricky flipping or runny yolk debacles in sight. Just grab a couple cans of chickpeas, give them a rinse and a drain to get rid of that weird, beany liquid (or save it for light and fluffy vegan dessert treats) Then pop them into some hot oil until they just begin to crisp up and toss a bunch of spices into the mix. Let the whole thing get toasty for about a minute and then use those spiced chickpeas on everything from pasta to polenta to salad!

Of course you can always substitute whatever spices you enjoy the most. I chose ones that I happen to have kicking around the pantry – because easy seems like the right thing for a weeknight dinner salad. But you do you, friend. 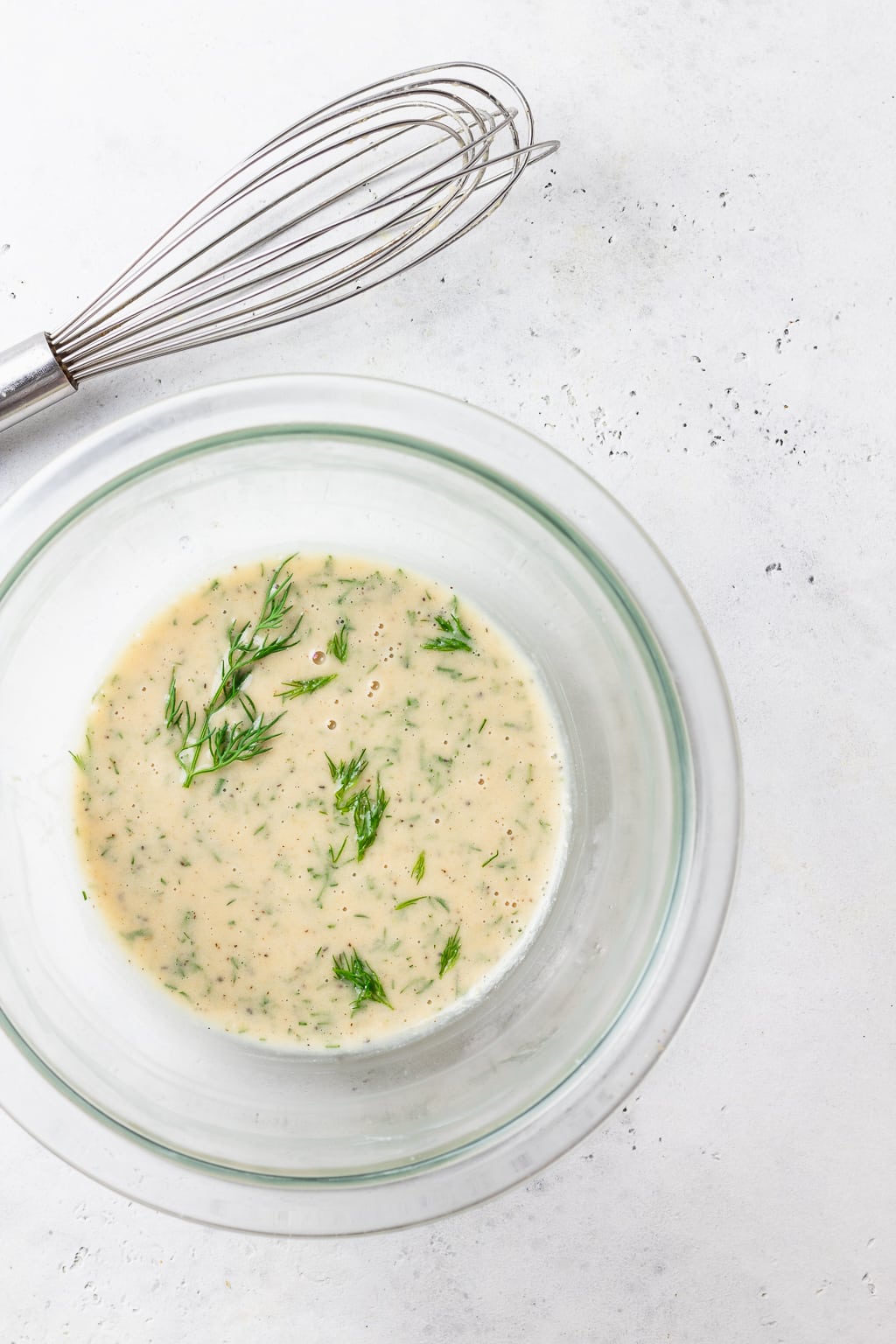 How to make tahini vinaigrette

You know all those recipes that have you emulsify oil into vinegar drop by painstaking drop? This is not one of those recipes. Tahini, if you’ve never had it before, is just ground up sesame seeds. It’s savory, nutty, with a pleasant touch of bitterness. I love it in all the things, even chocolate chip cookies. But this vinaigrette is my newest tahini obsession. One, because it’s damn delicious. And two, because it’s literally as easy as quickly whisking all the ingredients together. The tahini naturally emulsifies the whole thing, giving you a thick, almost creamy dressing that’s entirely dairy free. And all without the constant whisking and teeny, tiny stream of oil.

A few things about tahini if you’ve never bought it before:

How to assemble a perfect Greek salad

This is totally a loaded concept. Any Greek salad that you will happily eat is an excellent Greek salad. In my humble opinion this one is pretty near perfect, but honestly if it has a big chunk o’ cheese on it…well I think you know. 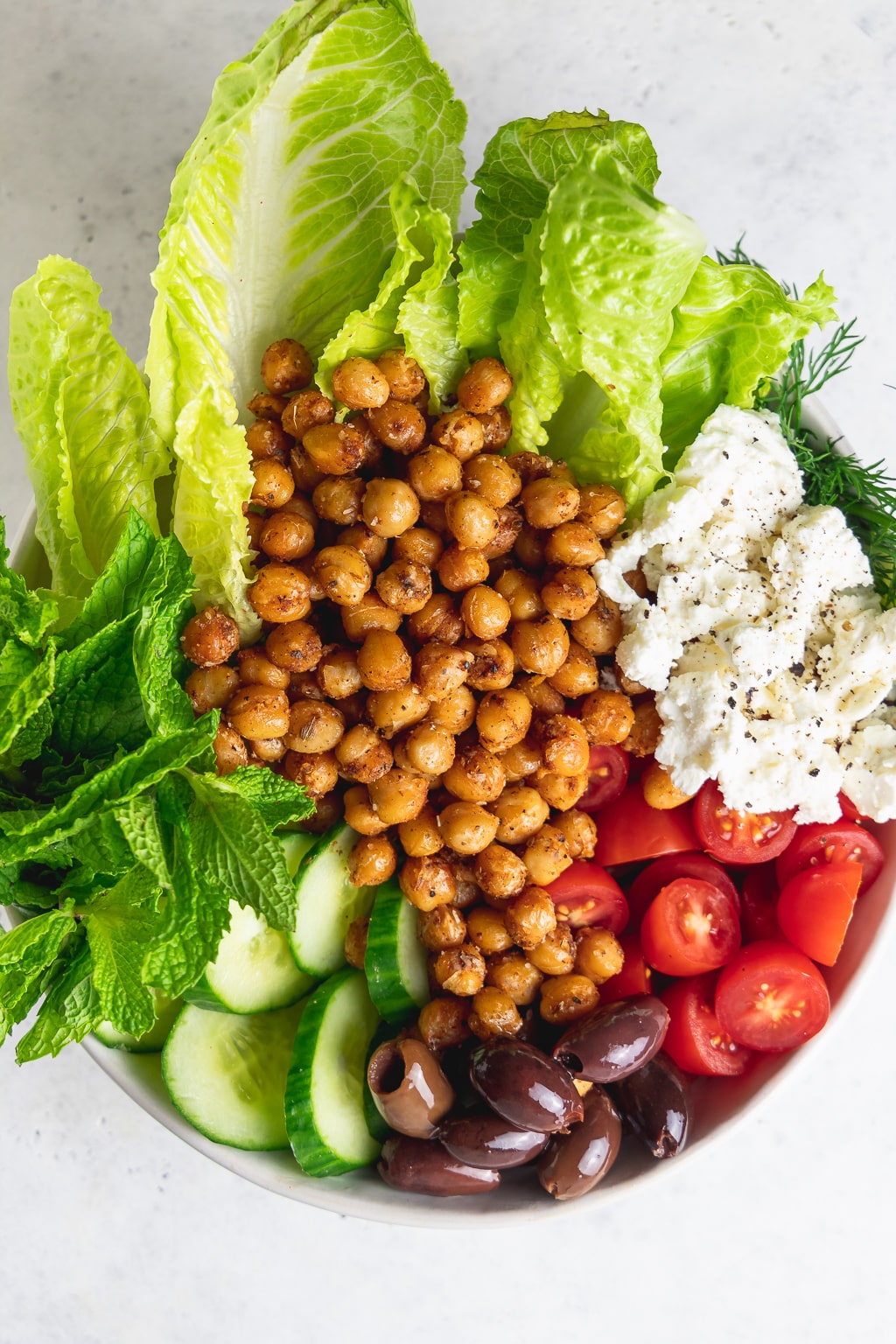 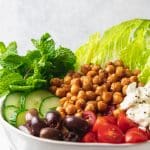 This spiced chickpea Greek salad combines my love of middle eastern spices with my undying affection for Greek olives and feta cheese. Grab the recipe for this protein packed, healthy salad and get a delicious dinner or meal prepped lunch on the table in no time.

For the tahini vinaigrette:
In a small bowl, whisk together tahini, vinegar, honey, kosher salt, black pepper, garlic, dill, and water until smooth. Set aside.

For the spiced chickpeas:
In a large skillet set over medium-high, heat olive oil until shimmering. Add chickpeas and saute, tossing occasionally for about 7-10 minutes, or until they begin to crisp up on the outside, but are still soft in the middle. Add kosher salt, pepper, oregano, garlic powder, cumin, and smoked paprika. Stir to combine and cook for one minute more. Turn off heat and set aside.

*Tahini is made of ground sesame seeds and can be found at most grocery stores in the international foods aisle. It is normal for the oil to separate, give it a good stir before measuring it out for the dressing.

**Feel free to use a different kind of vinegar – I subbed in both cider vinegar and red wine with good results. But note that red wine vinegar gives the dressing a slightly off putting color.

All the components can be made up to three days ahead of time. Store them separately in covered containers in the fridge and assemble as needed.