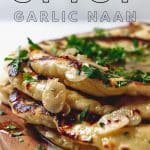 This spicy garlic naan is tender, bubbly, charred in all the right places, and bathed in spicy, garlic butter. Basically it’s a real hot mama. 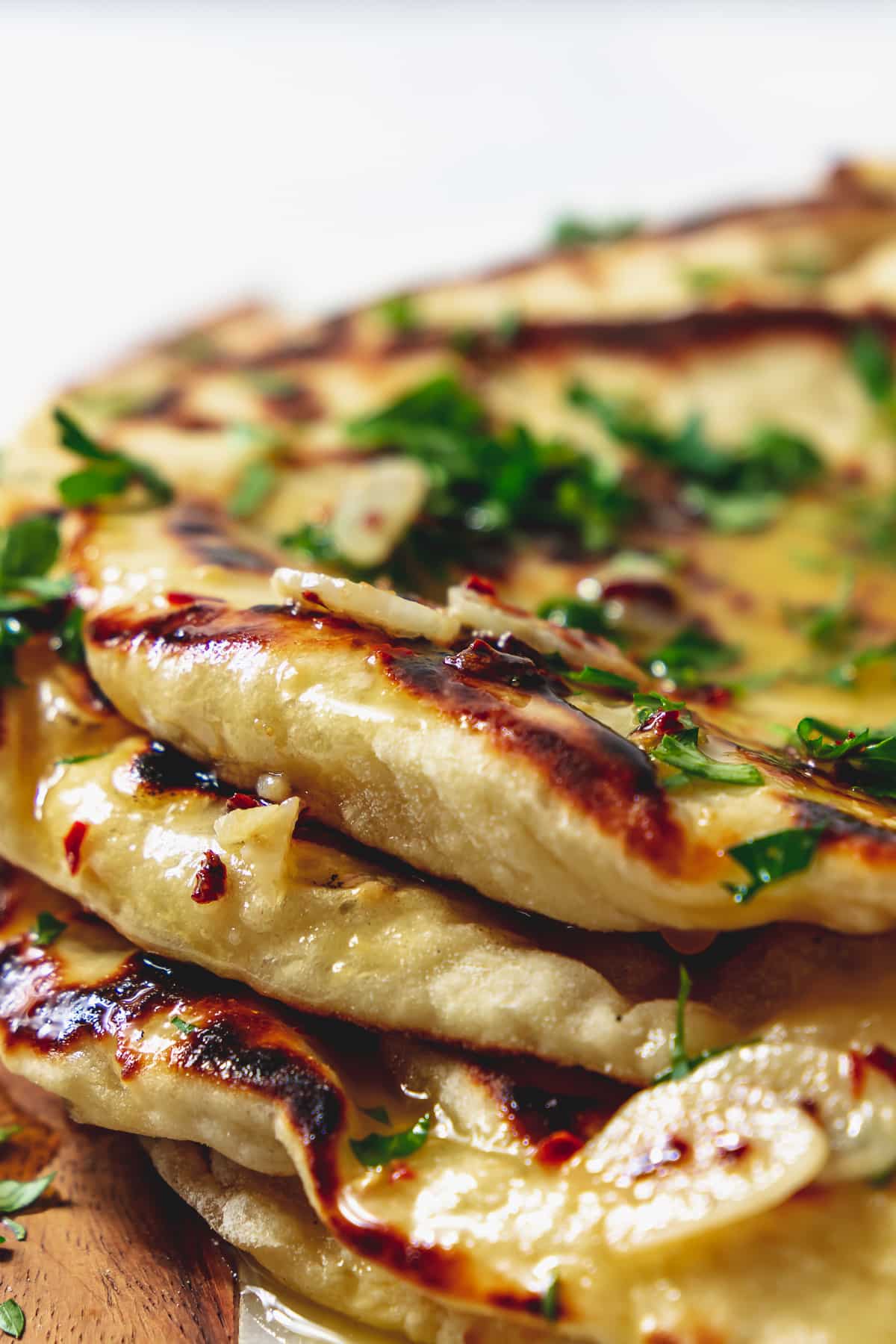 Obviously Friday is cause to celebrate, right? When I was a teenager Fridays meant no homework, driving around the beltway with friends, and always ending up at a diner. Fridays in my early 20’s were all about what bar had the best shot special and its proximity to large slices of cheap and mediocre pizza. A few years later Fridays focused on whiskey and board games in Brooklyn. And nowadays, casual pants, seltzer in a can, and craveable carbohydrates rule my world.

So today I’m sharing a particularly lovely carb with you, that also happens to be a part of the carefree, summer dinner party spread I’ve been chronicling over the past couple of weeks. So let’s chat about this beautifully buttery, garlic spiked, flatbread of my dreams…shall we? 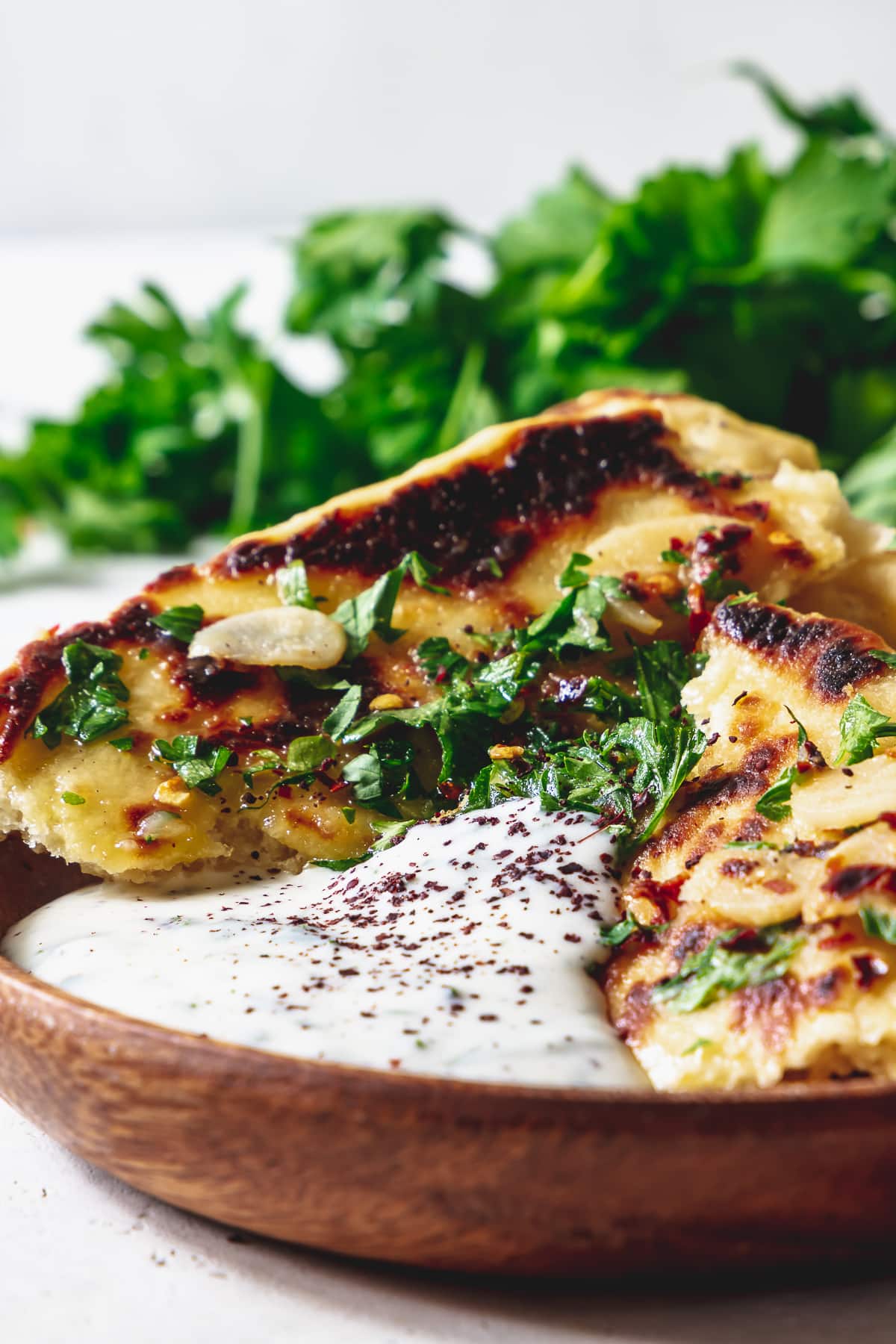 This spicy, garlicky, flatbread is a great one to tackle if you’re just starting to make your own bread. It’s very forgiving, doesn’t take forever to rise, and doesn’t even involve the oven. Plus, after it’s been beautifully charred it gets bathed with a chili spiked garlic butter that truly takes it over the top. I mean, what? But first things first.

What is Naan Bread?

Naan is a yeasted flatbread typically found in Indian cuisine. It’s usually baked in an incredibly hot, tandoor oven. These ovens look kind of like bit clay pots. To make each naan a skilled baker expertly slaps a round of dough directly onto the inside of the oven wall. Within minutes the bread is extracted using a long metal pole and emerges bubbly, charred, and ready for greedy consumption.

Like most bread, it’s usually eaten as an accompaniment to the meal, ripped off into pieces, perfect for scooping up dips and sopping up sauces. It can also be flavored with a myriad of things. In my version I’ve gone for lightly toasted garlic and fiery red chili. Also butter, because duh. 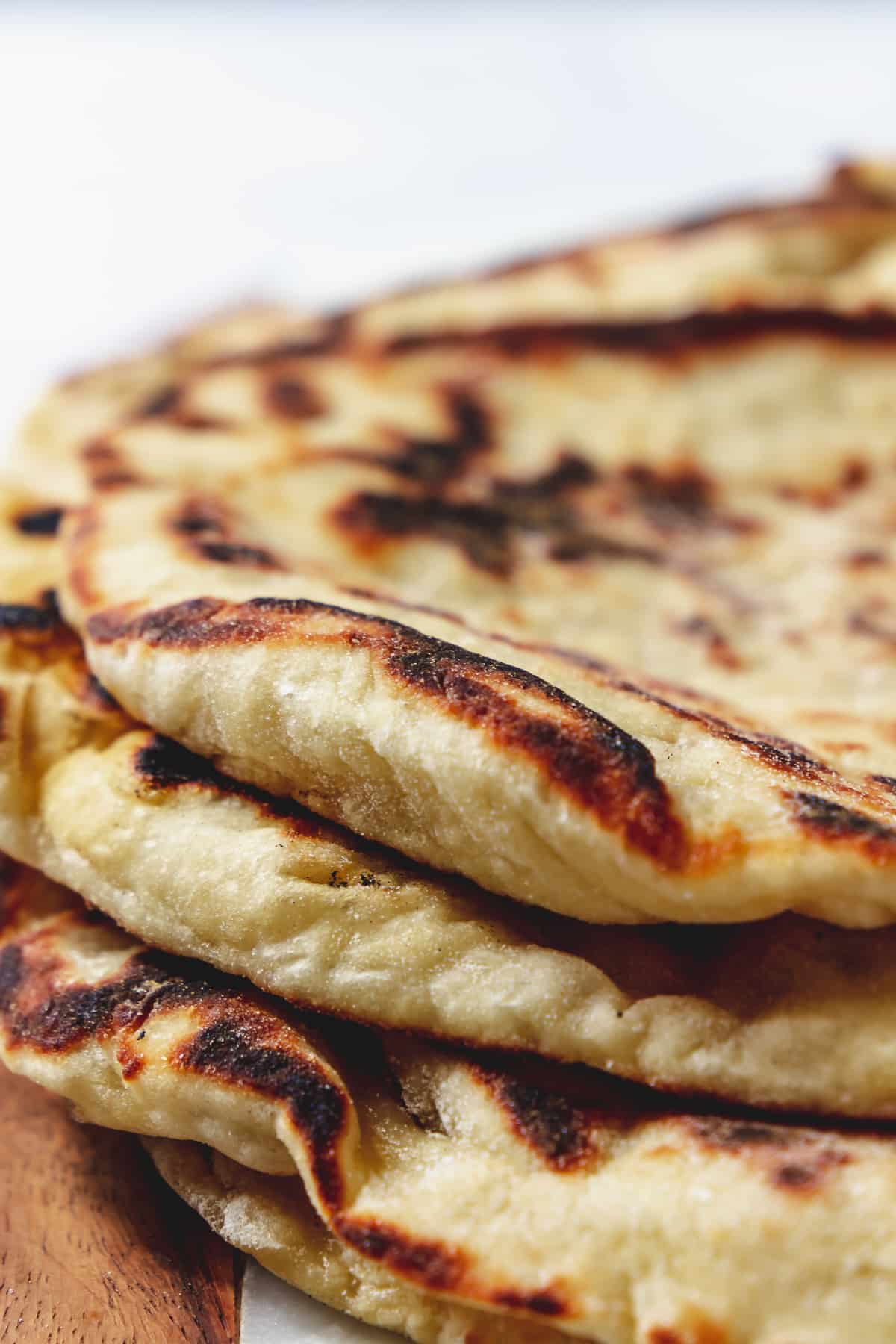 How to Make Naan at Home

Clearly I do not have a clay tandoor oven – a girl can dream, but honestly where would I even put it? So how do I make tender, slightly chewy, and beautifully charred naan in my own kitchen? It’s really not as hard as it might seem. First we’ll start with the dough. 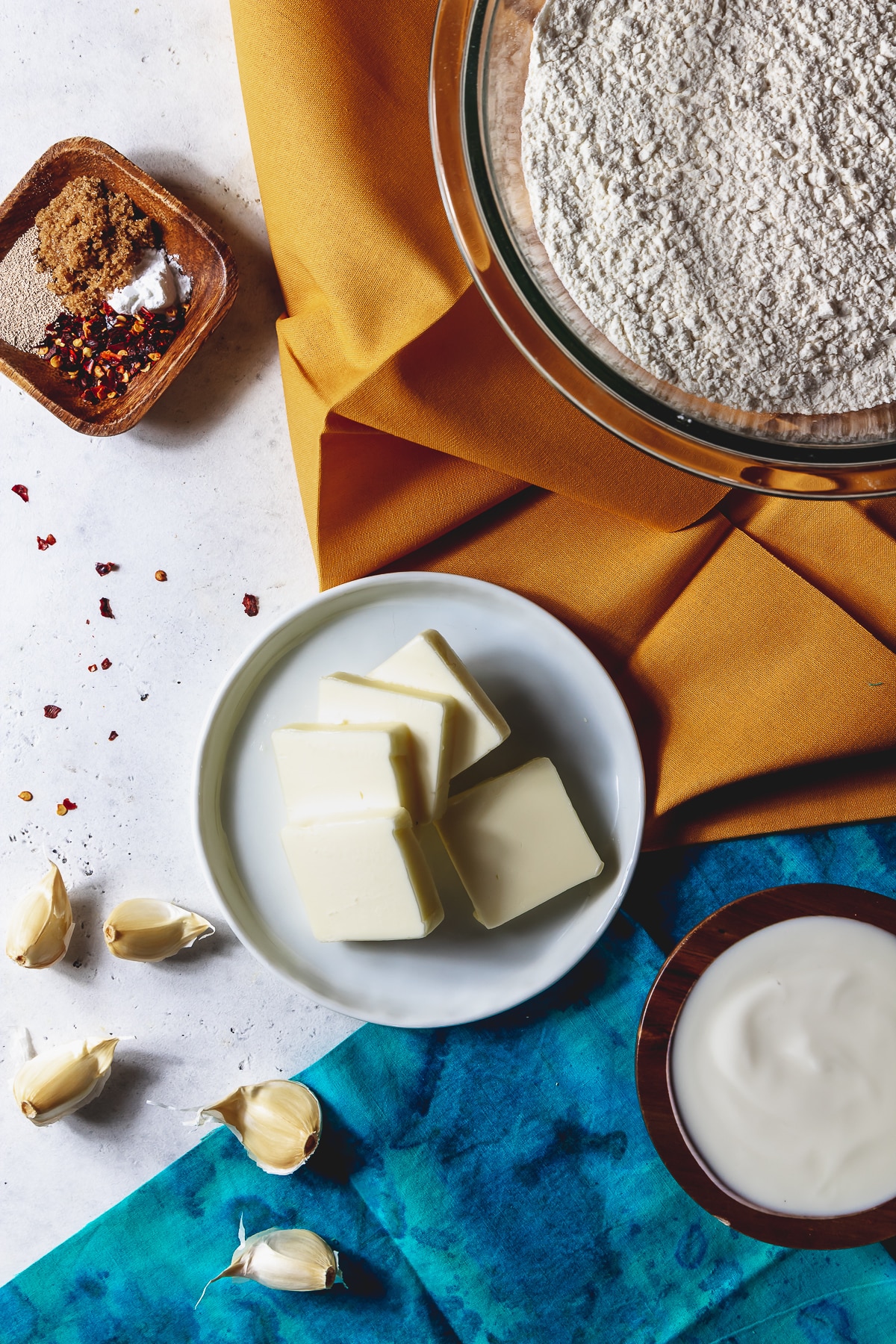 Mixing up this dough is a little different from your typical bread dough, which is usually just flour, water, salt, and yeast. Because this dough needs to rise quickly we’ll add not only instant yeast (sometimes called rapid rise) but also a bit of baking powder for some extra insurance. After all, we’re going for something filled with lovely irregular air holes, not a flat, dense, disc. Then comes another unusual ingredient – yogurt. It makes sense if you think back to the origin of naan. Indian food relies heavily upon tangy yogurt, and if you’re using it in everything else (sauces, curries, etc.) then why not include it in your baked goods as well? 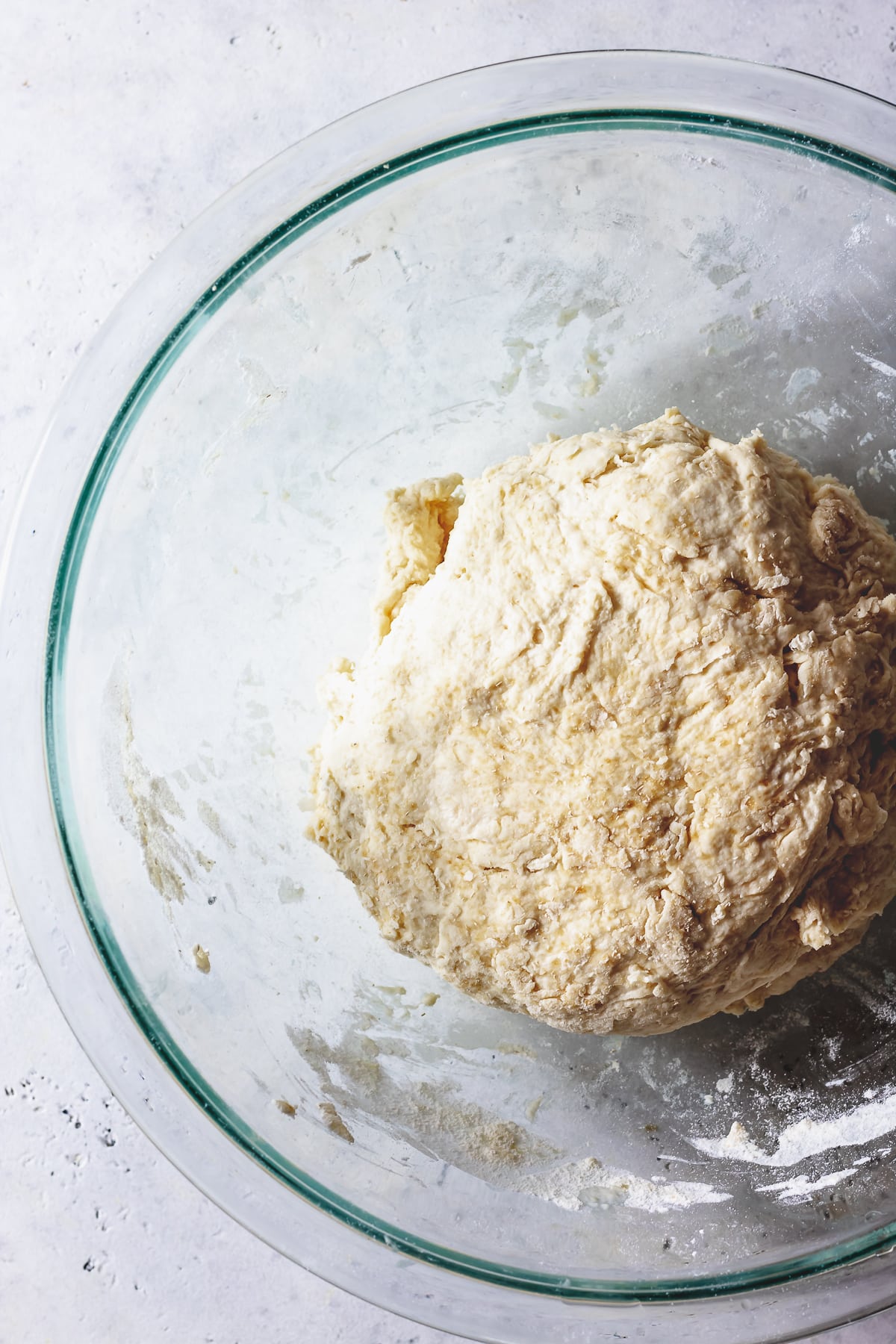 Yogurt actually works in two ways here. Obviously it lends that subtle tang, which is totally a hallmark of great naan. But it also acts as a natural tenderizer which makes your naan totally tearable and pillowy soft. Can you make flatbread without yogurt? Yes, of course, but I wouldn’t call it naan.

Then add some salt, and a bit of brown sugar, mix it up, and let it sit, covered for about an hour, or until the dough has doubled in size. During warmer months this may take as little as 30 minutes, so just keep an eye out.

2. Roll Out Your Dough

Once your dough has risen, it’s time to roll and cook your naan breads. I like to roll all of mine out first because the cooking process actually happens pretty quickly. This is usually the part where people get a little anxious, but trust me, handling dough (of any kind) doesn’t have to be a nail biter. Here are a few tips for rolling out your naan breads that will definitely come in handy. 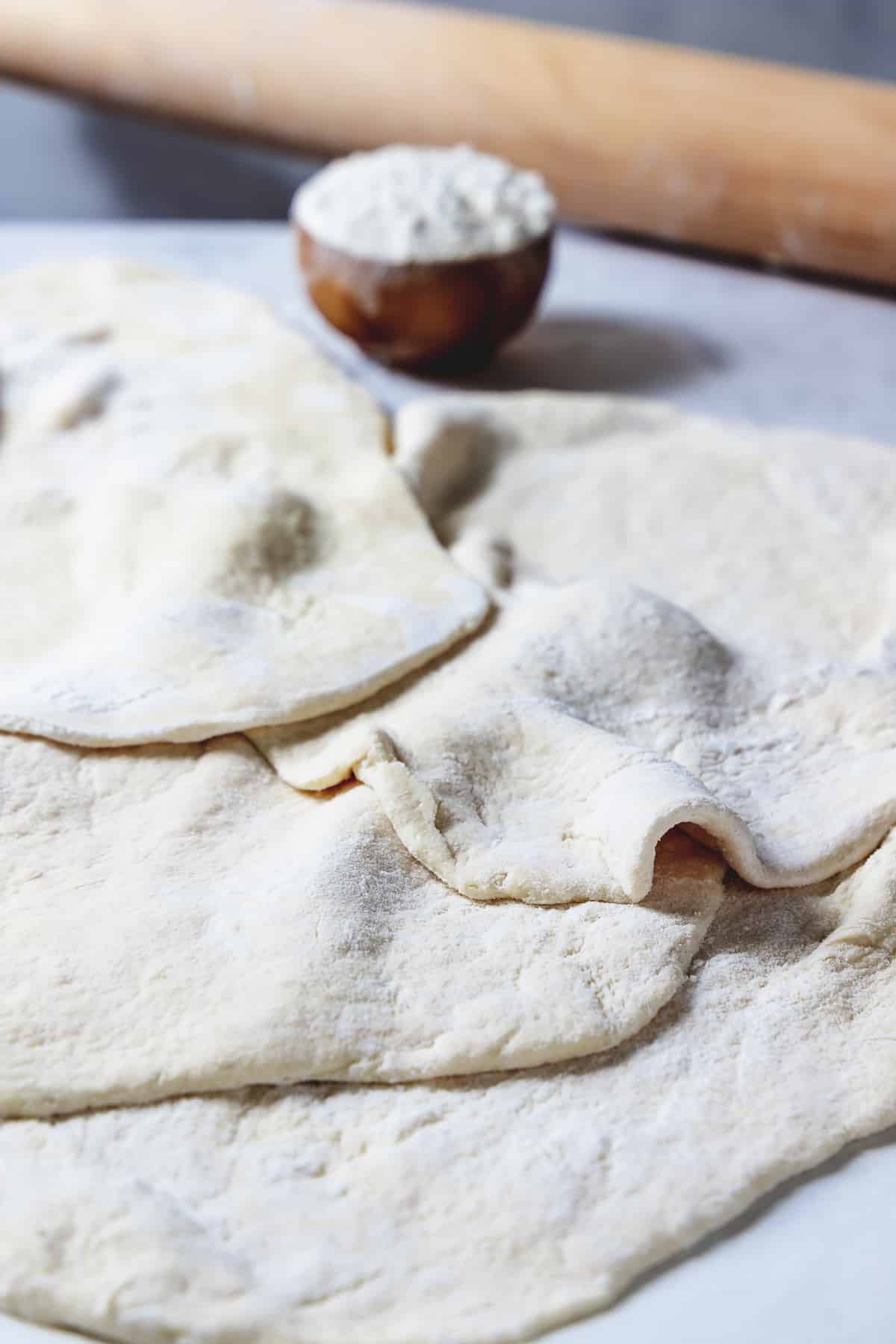 By now your dough is rolled out, and you’ve just got to cook the damn things. Grab a large skillet. You’ll need one that’s NOT non-stick for this. Cast iron or stainless steel are both good options. Also make sure you have a lid available. A large rimmed baking sheet is a great substitute in a pinch.

Heat the skillet over medium high and add a teaspoon of oil. When the oil begins to shimmer and ripple, it’s ready for your first naan. If the oil starts to smoke, turn your heat down to medium.

Place one piece of dough flat in the skillet and immediately cover the pan. Set a timer for two minutes. When the timer goes off, remove the lid and flip your naan. If it’s resistant to flipping it means it’s not ready. Let it go for 30 more seconds and try again. It should start to bubble up and char in spots. Cook the other side uncovered for another minute, or until spotty brown. Wrap cooked naan in a clean kitchen towel. They will keep warm for about 30 minutes this way, but can also be reheated in a low oven. 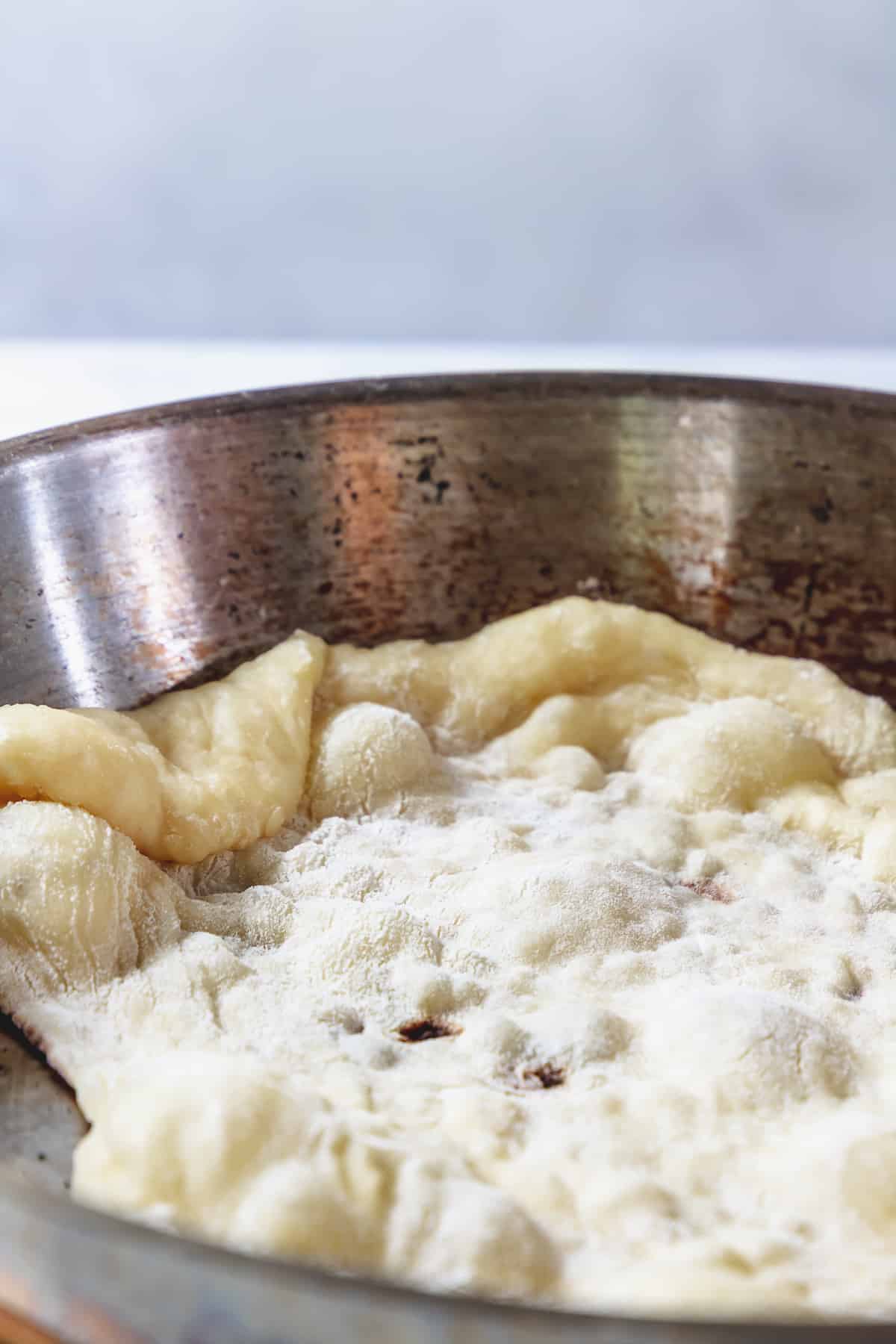 When the final naan is brown and bubbled up, wipe out the skillet with a paper towel and melt the butter over medium heat. Add your sliced garlic and chili flakes. Saute just until the garlic turns a very light golden color, then kill the heat. Garlic can go from toasty to burned very quickly, so it’s always better to err on the side of just a little bit underdone, as it will continue to cook as it sits.

Now drizzle, paint, or just spoon that garlicky, buttery goodness all over your still warm naan. Garnish with a little parsley and some flaky sea salt. Then rip off a piece and dip it into the nearest bowl of hummus you can find. 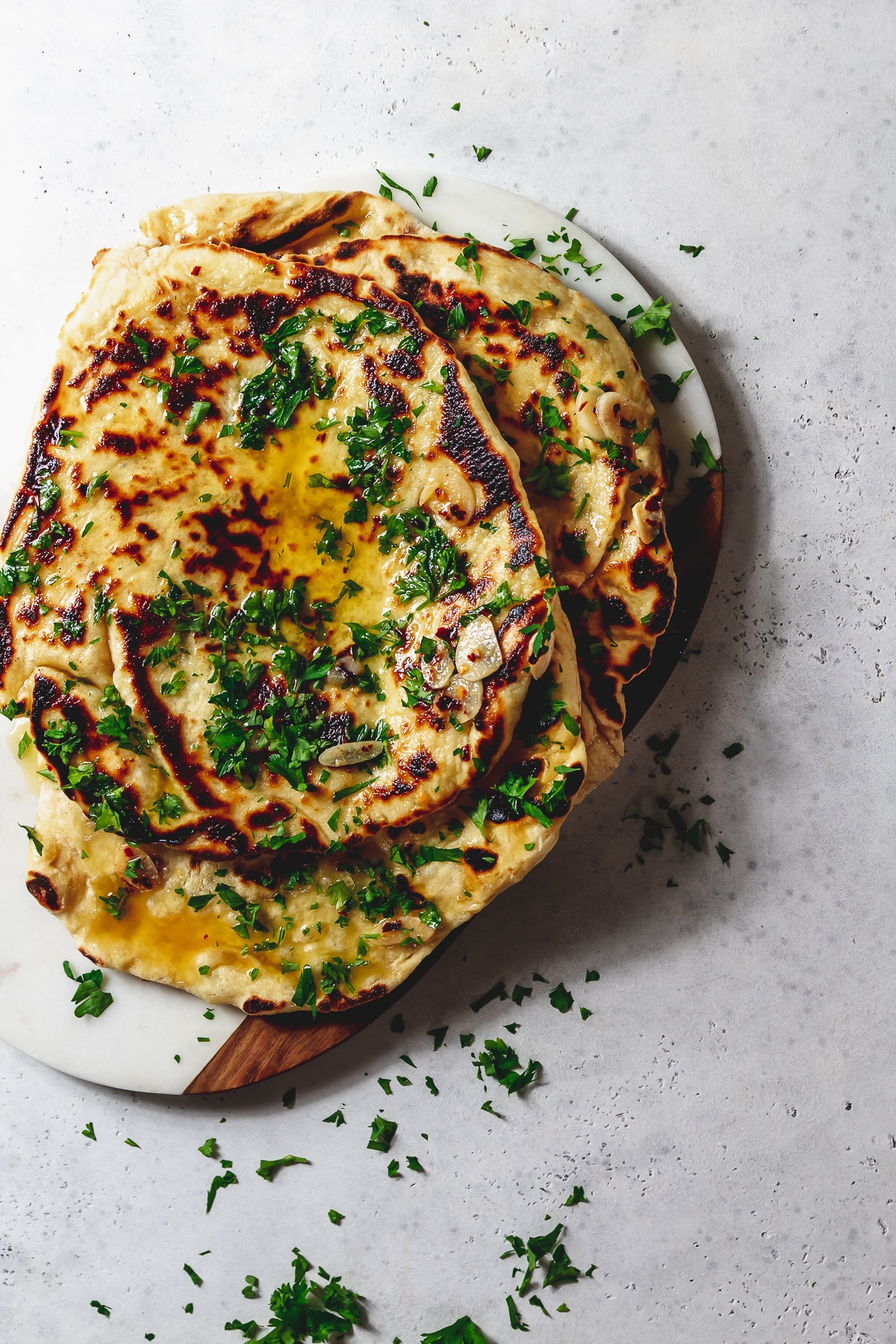 These lovely and imperfect breads are an excellent gateway into all things carby and baked. Oh and did I mention that they’re also a stellar addition to your next summer dinner party spread? If you haven’t checked out the other installments of this six-part series go take a gander at part one’s peach quinoa tabbouleh and then pop over to ogle these next level crispy chicken thighs in part two. And keep an eye for next week’s recipe which is the natural partner to this spicy naan situation. Any guesses? 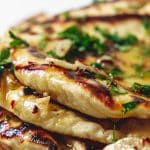 Spicy garlic naan is the side dish that steals the spotlight. This easy to make, pillowy soft, flatbread is cooked completely on the stove top and bathed in chili garlic butter.

In a large bowl, whisk together flour, baking powder, instant yeast, kosher salt, and brown sugar. Add yogurt and mix until a dough forms. If it’s too dry add a tablespoon of water at a time until you have a slightly sticky, somewhat shaggy, but cohesive ball of dough. Cover with plastic wrap and let rise until doubled in size – roughly an hour (but could be sooner).

Divide the dough into four pieces and roll each portion out, on a well floured surface, to a rough 9 inch circle. Keep rolled out dough separated by pieces of parchment paper while you finish the rest of the dough.

Place a large skillet (cast iron or stainless steel work best) over medium high heat. Heat one teaspoon of oil until it shimmers but doesn’t smoke. Lay one dough round in the pan and immediately cover with a tight fitting lid (or a large rimmed baking sheet). Cook covered for two minutes. Remove lid and flip naan. Cook the second side, uncovered, until it is spotty brown. Wrap cooked naan in a clean kitchen towel to keep warm while you repeat the process with the rest of the dough.

When all the naan has been cooked, wipe out the skillet with a paper towel and return to medium heat. Melt the butter and add the garlic, kosher salt, and chili flake. Sauté until garlic is light golden in color. Remove from heat. Spoon spicy garlic butter directly onto warm naan and garnish with parsley. Serve immediately.

Leftover naan can be reheated in a low oven.

Make sure your yeast is labeled “instant” or “rapid rise”. If it says “active dry” then you’ll need to proof it before you mix up your dough. To do this, dissolve the yeast and brown sugar in a couple tablespoons of warm water and let sit for five minutes. It should bubble up and foam (if it doesn’t it means your water was probably too hot or your yeast is dead). Then add this mixture to your dry ingredients and proceed with the recipe. You may need to add a little more flour to compensate for the added liquid.

This dough doesn’t require much kneading, so just trust that as long as it comes together in a ball (even if it’s a slightly sticky, somewhat shaggy ball) then you’re good to go.

Don’t use a non-stick skillet for this. Cast iron or stainless steel will work best.

Make sure to monitor your heat and adjust accordingly. You want the pan to be hot, but you don’t want your oil to smoke.

If you don’t have a lid for your skillet feel free to improvise by putting a rimmed baking sheet on top of your pan. 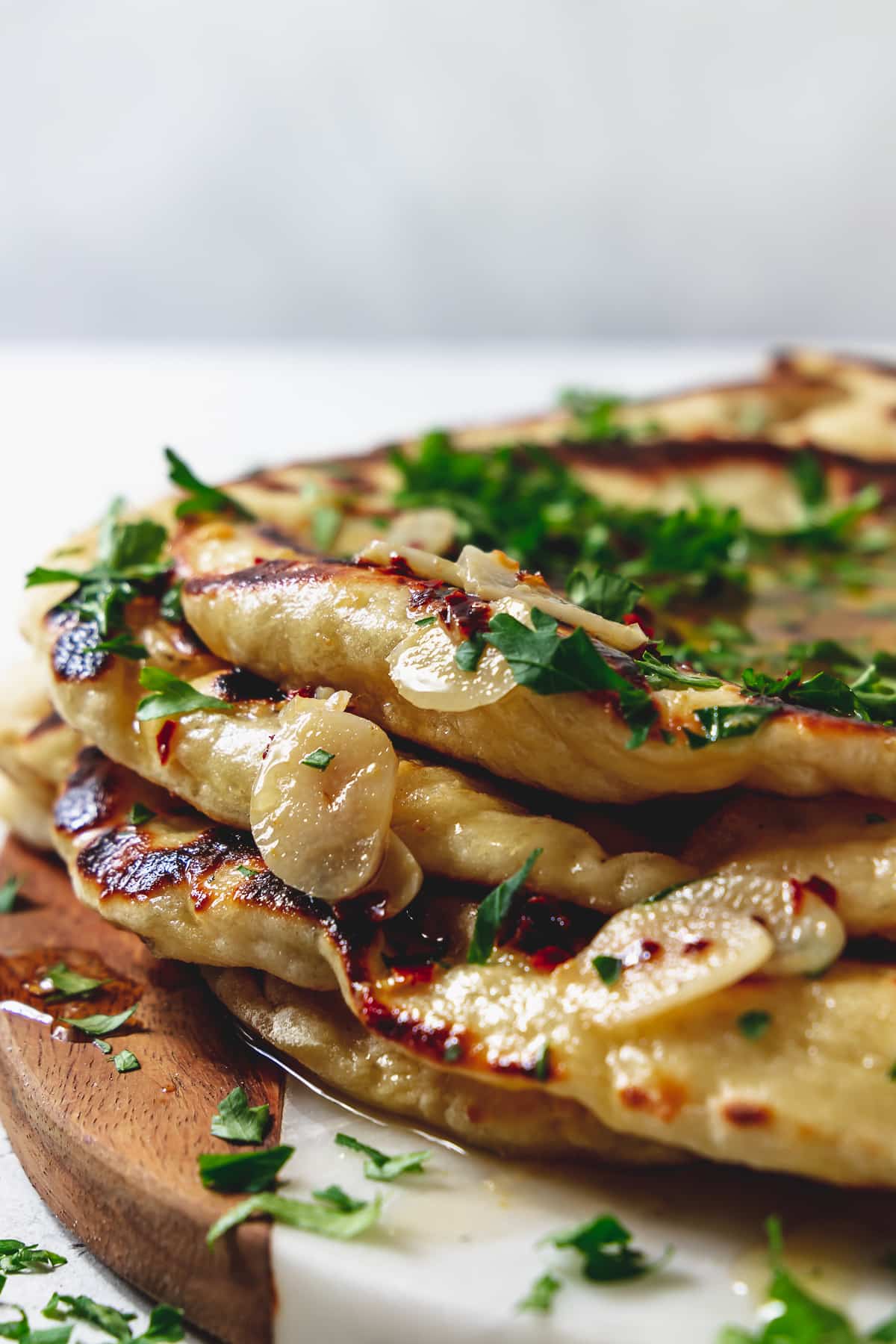