I’d like to tell you that I learned to make biscuits at the knee of my wise-cracking, Southern granny, but that would be a lie. My grandma was a great cook, but she never bothered with biscuits, or jokes for that matter. I didn’t even know what a biscuit was until I was twelve, and then I assumed they all came out of a can you popped open on the side of the kitchen counter.

So this is the part of the story where I’m biscuitless and alone. But then I thought, THE INTERNET! Seriously, how did people do stuff pre-1990’s? But if you’ve ever googled anything before, you know that there are a gazillion answers for a gazillion questions out there, and who has time to sift through all that junk? So, overwhelmed by opinions from literally millions of people, I chose a random recipe and made some biscuits. And they were bad – like little, dense hockey pucks of sadness.  Oh, I still served them (my sincerest apologies to those poor, defenseless, and as I remember it very polite dining companions of many years ago) but I knew they were horrible. It’s been several years since then, and currently I’d say I make a pretty damn good biscuit. But it did take some practice.

So why this bloated tale of my baking woe? Well writing is therapeutic, so perhaps I’m just processing past strife in the hopes of becoming a happier, healthier Jo…but probably not. So instead we’ll say it’s simply to let you know that I used to suck at making biscuits and now I don’t. I’m not sure what you’ll do with that information (most likely forget it and scroll down to the recipe). Maybe it will inspire you to give something a second, third, or fourteenth shot before throwing in the towel forever. But hopefully I’ve been through all the necessary trials and tribulations with biscuits so you can nail it on the first try. 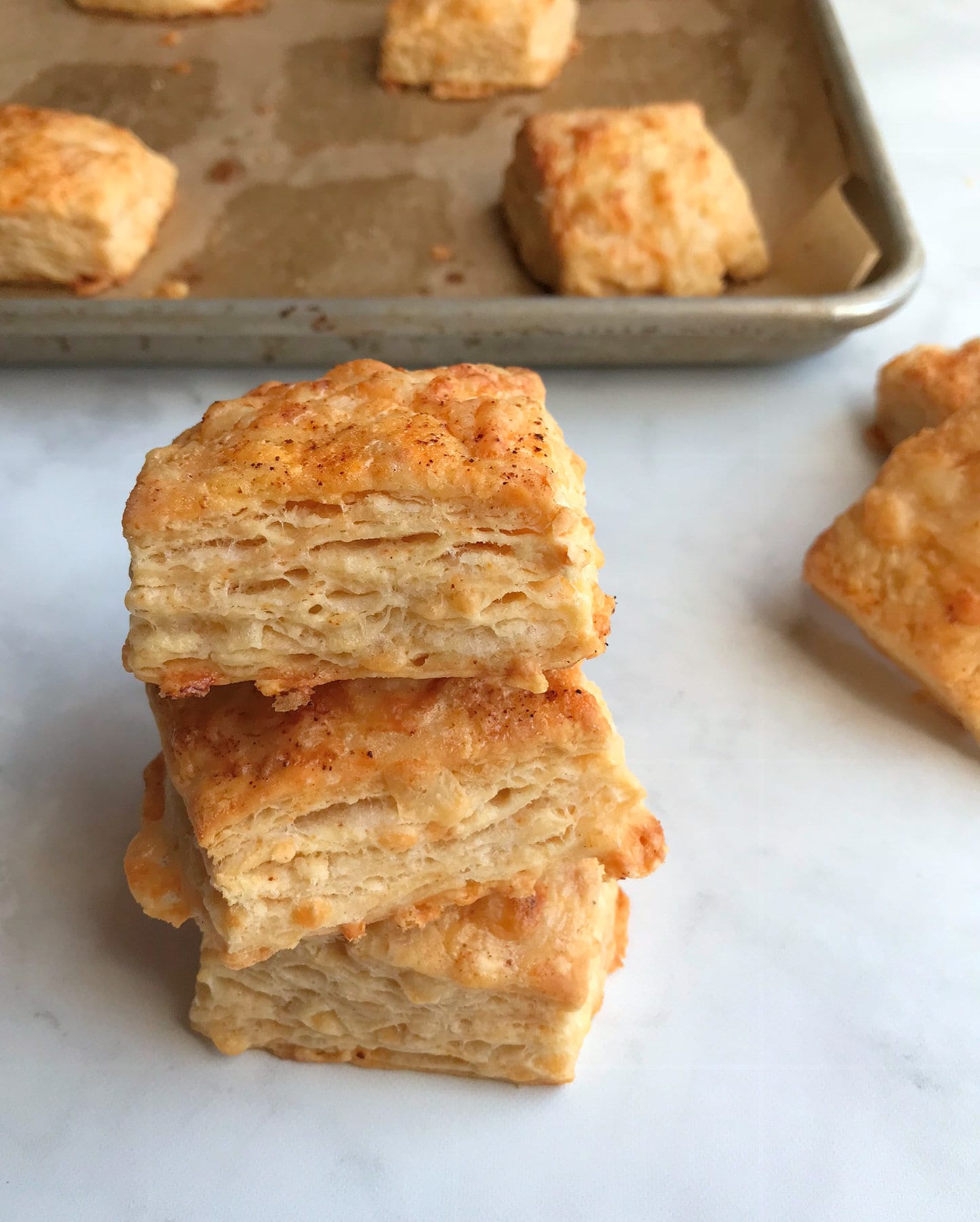 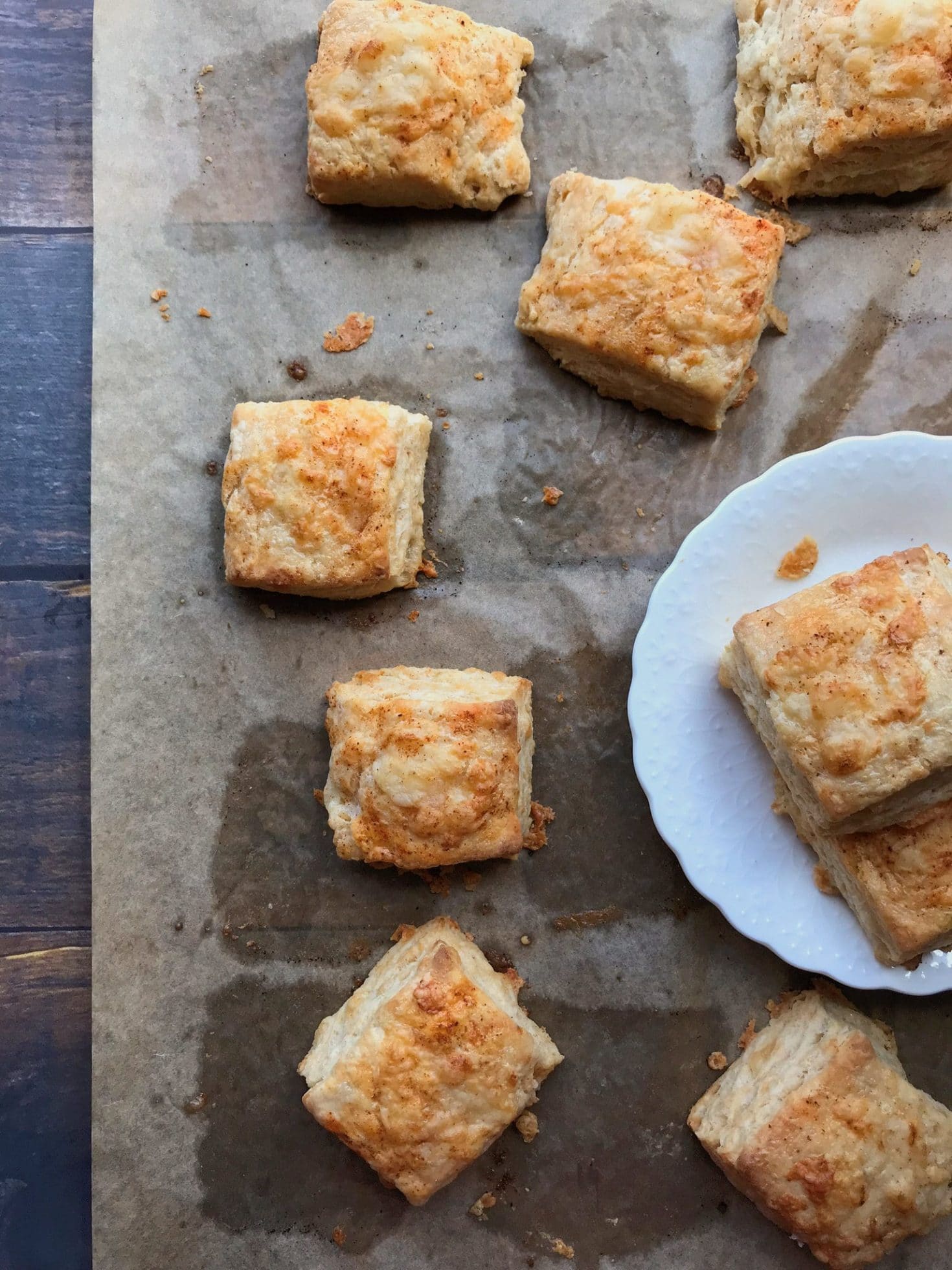 Biscuit science is something that you can read about all over the internet. Perhaps here or here. But the two takeaways should be keep things cold and don’t over work the dough. Just remember those two and you’ll be good to go. Also, I make square biscuits because then you only have to cut them once, but if you prefer round that’s cool too. Just re-roll whatever scraps you have after the initial round and cut them into slightly misshapen, but equally delicious biscuits.

Also a note about the cayenne pepper. I found that ½ tsp gave me a biscuit that had a very gentle heat at the back of the throat, but nothing crazy. With that knowledge, please spice according to your taste. I would probably not go higher than 1 full teaspoon myself.

Line a baking sheet with parchment paper, or grease with non-stick spray

Using the large holes of a box grater, grate the butter directly into the flour mixture. When you get to the nub at the end, just cut it into small pieces and toss it in, ie: don’t grate your fingers into the biscuits, safety first.

Add ¾ of the cheese and mix gently with your hands to distribute the butter and cheese into the flour. Work quickly, so you don’t melt the butter with the heat of your hands.

Drizzle in the buttermilk and mix with a rubber spatula until it comes together into one large mass, there will still be a few dry bits at the bottom of the bowl.

Turn the biscuit dough out on to a lightly-floured surface and pat into a rough, 9 inch square.

Using a sharp knife or bench scraper, divide the dough into three equal rectangles. Stack the rectangles on top of each other and divide in half. Now you should have two stacks of three. Stack those two on top of each other, making one stack of six and then roll out to a 12 inch by 9 inch rectangle. The reason for all the dividing and stacking is to create those beautiful, flaky layers in the biscuits. This also gently kneads the dough, without overworking it.

Using a knife or bench scraper, divide the dough into 12 equal pieces. Try not to drag the knife blade through the dough, as it will crush the layers you just created. Instead just cut straight down and then directly lift the blade back up. Then continue the cut wherever you left off and repeat until you have 12 biscuits. You could also make round ones with a biscuit cutter or a drinking glass, but the same principle applies, cut straight down and lift straight up, don’t twist.

Place the biscuits on the baking sheet about an inch apart. Brush the tops lightly with the heavy cream and sprinkle with the smoked paprika and remaining cheese.

Bake on the middle rack for 18 minutes, or until golden brown and puffed up.

Let cool on a rack for 10 minutes before serving. 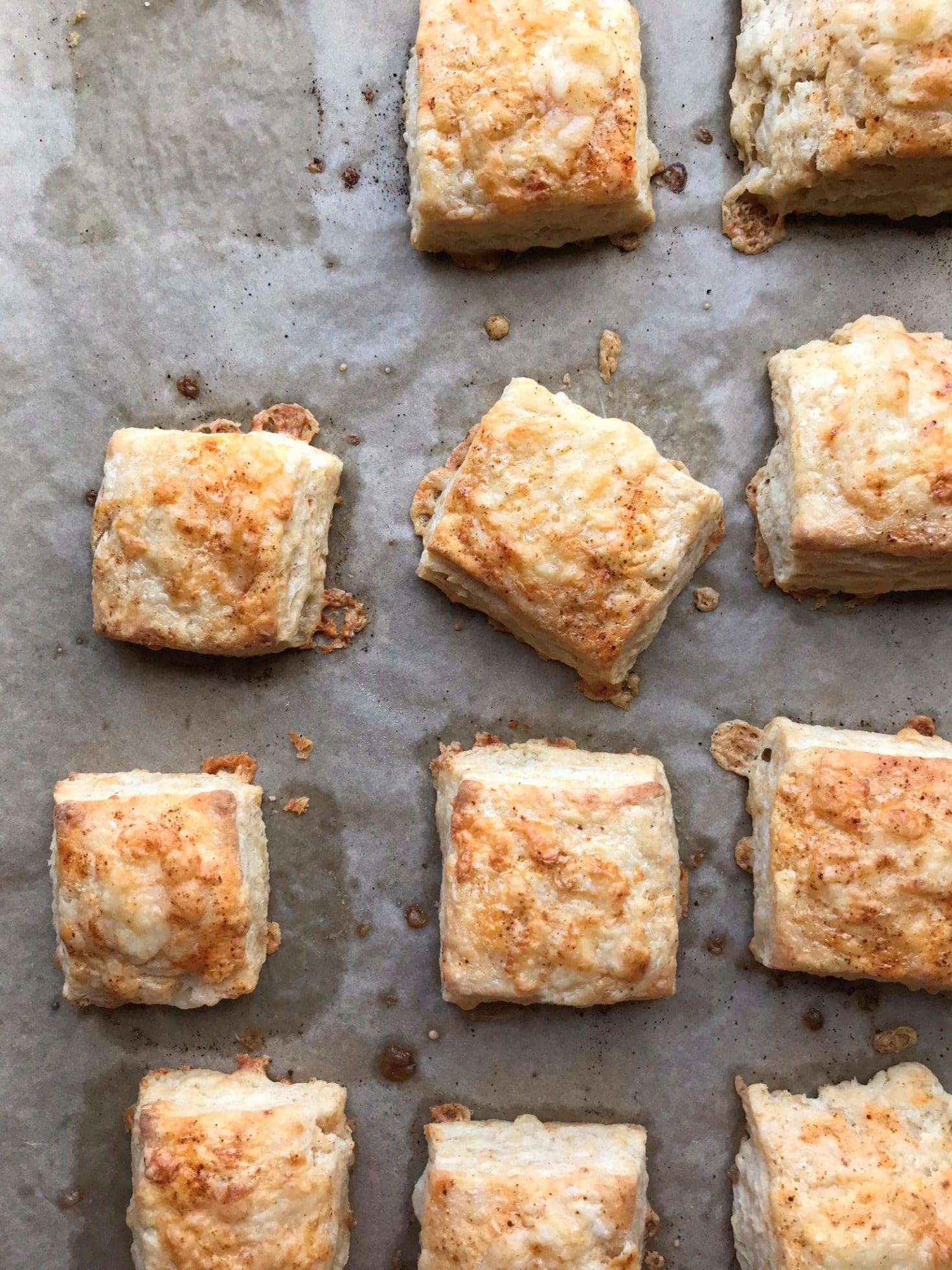