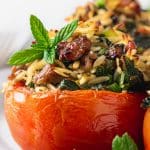 Juicy, summer tomatoes get stuffed with a flavorful mixture of sausage, orzo, spinach, fresh herbs, and salty feta. This easy dish is a perfect way to showcase those beautifully ripe and red tomatoes.

Preheat your oven to 400°F. Bring a small pot of water to a boil. Salt the water and cook the orzo for 6 minutes, or just until al dente. It will continue to cook inside the tomatoes, so err on the side of a little underdone. Drain and rinse under cold running water. Set aside.

Cut the tops off the tomatoes and remove the insides, leaving a quarter inch border. Season the insides with salt and pepper. Set aside.

In a large skillet set over medium heat, cook the sausage until brown, about five minutes. Add the scallion whites and saute for another two minutes, or until they begin to soften. Add the spinach and cook until wilted. Transfer the sausage mixture to a bowl and add the feta, mint, salt, pepper, scallion greens, and orzo. Stir until thoroughly combined. Stuff a generous half cup of the mixture into each tomato – packing it down lightly.

Place the tomatoes back in the skillet (or a baking dish) and bake, uncovered for 25 minutes or until the tops begin to brown lightly. Serve immediately.

Instead of orzo you could use any small pasta, cooked until al dente. Other great substitutions would be rice, quinoa, farro, or barley.

Similarly, feel free to substitute any tender herb in place of mint.

To remove the inside of the tomatoes cut the tops off, then using a sharp paring knife, cut a circle around the border of where the meat of the tomato meets the inside edges, being careful not to cut through the bottom of the tomato. Then twist the insides out with your fingers and scrape any extra flesh out using a small spoon.

Feel free to make this vegetarian by substituting the sausage for tofu, mushrooms, or just more orzo and spinach.