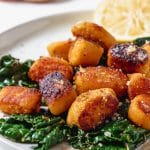 Homemade gnocchi is intimidating, but I honestly don’t know why. Microwave that potato, mash it up with some tasty cheeses, and then add in just enough flour to bring it all together. You will get a little messy, but it will be soooooo worth it. Also brown butter because yum and kale because balance.

Bake or microwave the sweet potato until completely tender (approximately 45 minutes in an oven or 5 minutes in a microwave). Set aside until just cool enough to handle.

In a medium bowl combine pecorino, mascarpone, ½ tsp kosher salt, black pepper, and lemon zest. Peel the sweet potato, scoop out the flesh, and add it to the cheese mixture. Mash with a fork until smooth (some lumps here and there are fine though). Add the flour and stir until you have a slightly sticky  but workable dough. Divide into the thirds.

On a well-floured surface, gently take one piece of dough and using your fingers roll it into a 16 inch rope (it should be about an inch in thickness). Continue with the remaining dough – dusting with flour as needed. Using a knife or pastry scraper, cut each rope into 16 one-inch pieces. Place on a floured baking sheet and transfer to the fridge. You can also freeze them at this point.

Bring a large pot of water to a boil. While you’re waiting, heat a large skillet over medium heat and add the butter. Cook the butter, swirling frequently, until it bubbles up and then begins to brown. Then lower heat as low as it will go (or just turn it off).

When your water is boiling, add a generous handful of kosher salt (like 3 tablespoons or more). Add your gnocchi and cook, stirring gently for about 1-2 minutes. Using a spider or slotted spoon, drain the gnocchi well and add them to the brown butter – the less water you bring over in this step the better.

Crank your heat to medium high and spread the gnocchi into an even layer (do this step in batches if your pan is too small – you can park any extra boiled gnocchi on a lightly oiled plate). Cook undisturbed for at least 2 minutes, or until the gnocchi begin to brown and crisp. Then flip and cook on the other side. Remove using a slotted spoon and drain on a paper towel lined plate.

Add the kale to the skillet, tossing to coat in the remaining brown butter. Saute until it begins to wilt. Add the lemon juice and season to taste with salt and pepper.

Serve gnocchi on top of kale and garnish with grated pecorino cheese, more lemon zest, and any brown butter remaining in the pan.

Depending on the size of your sweet potato, you may need a little more or less flour than the recipe calls for. Aim for a dough that isn’t sticky, but holds together easily. I tend to avoid adding a lot of flour to the mixture itself, but dust it quite liberally in flour once the gnocchi have been rolled and cut.

Don’t crowd your pan. Your gnocchi stand a much better chance of crisping up and not sticking to the pan if they each have their own little space. Second to this, don’t mess with them too much. You want them to get good and brown on one side, before you flip them. If they’re sticking, they’re not ready to flip.

Make ahead: You can freeze the uncooked gnocchi on a parchment lined sheet pan for a few hours. Transfer from the sheet pan to a ziplock bag and store for up to 1 month. Then cook straight from the freezer, adding one minute to the boiling time.