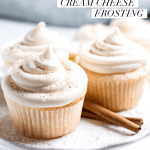 Last weekend I made these cupcakes. They were easy, beautiful, and so, so delicious. A light buttermilk cupcake, scented with vanilla, and generously mounded with maple, cream cheese frosting. We ate a couple, enjoyed a little sugar rush, covered the leftovers with foil, and then drove into the city to have dinner with friends. Fast forward a few hours to us arriving back at home. Everything looks more or less normal. Except for one corner of aluminum foil, peeled ever so gently back, exposing one, bare cupcake. 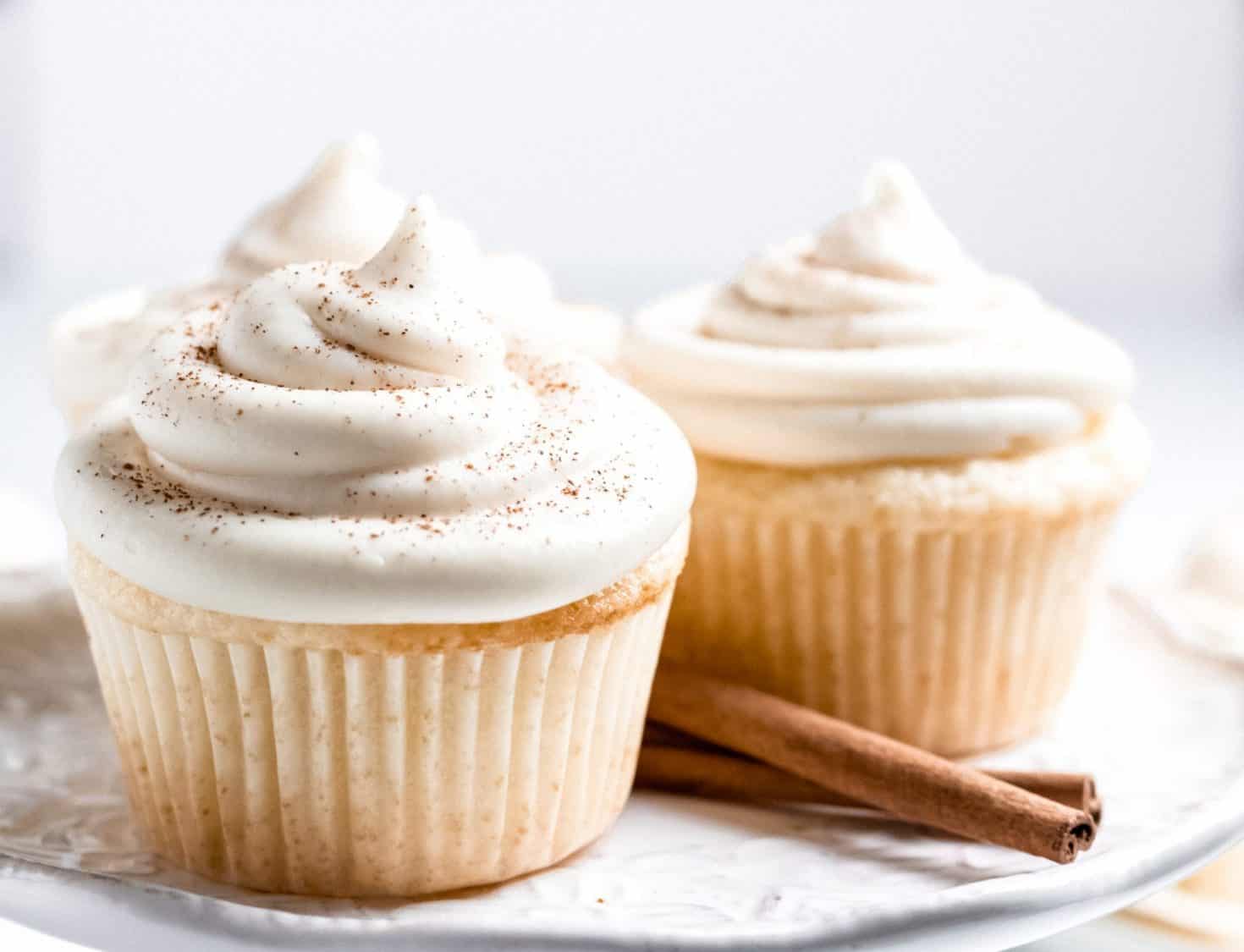 Oh shit…kitty ate the frosting. But both of them looked fine, neither acting as if they had just consumed roughly a half-cup of pure dairy and sugar. So we went to bed. The next morning, we rolled out of bed, looking forward to coffee, a big breakfast, and a relaxing Sunday. When Eddie went to feed the cats though he only counted one. Now for those pet owners reading this that have cats or dogs that leisurely graze on their food throughout the day – our cats are cut from a different cloth. Let’s call it a more food aggressive cloth – or to give you an idea, if the cloth could be mildly construed as edible, the cats would chow down. 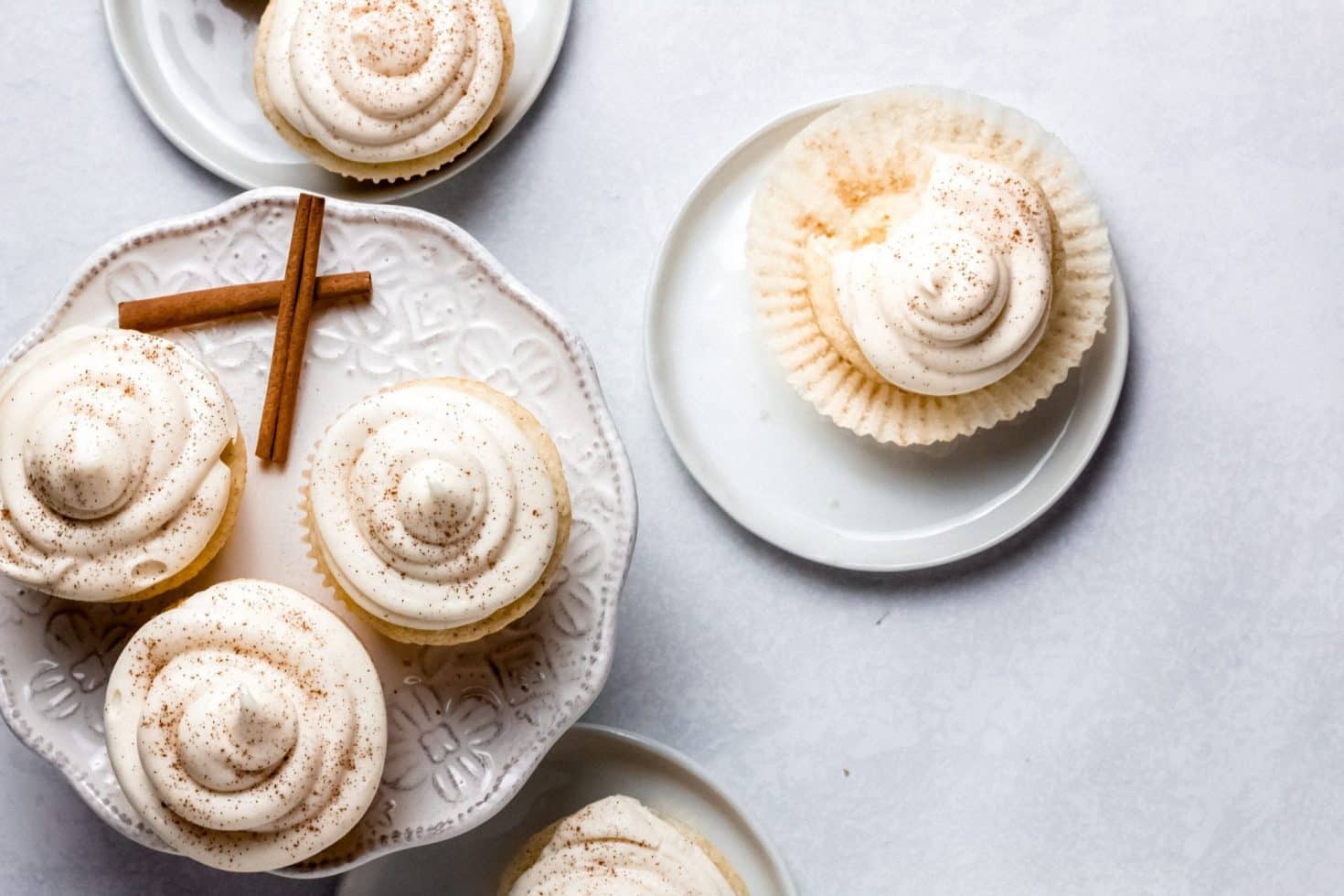 So to be minus one food-focused friend on that bright morning was more than a bit alarming. Did he escape in the night? Was he locked in a closet? We searched high and low, and as we continued to look my heart began to sink, thinking surely I’d uncover him in some dark corner, having recently taken his last breath. Well maybe because I said a silent prayer while searching under the bathroom cabinets, or perhaps just because kitty don’t play and it’s not his time yet – we found him under the couch – alive but exceedingly lethargic and moody.

After moving all the furniture in order to coax him out of hiding, we grappled with what to do. Was an emergency run to the vet really necessary, or was he just a little sick to his stomach? But what if it was something else and then in our neglect we lost our good pal? We would never forgive ourselves. So out came the dreaded cat carrier, and one epic battle later (which in and of itself should have been a sign that our Boozle was going to be just fine) we were on our way to kitty triage. 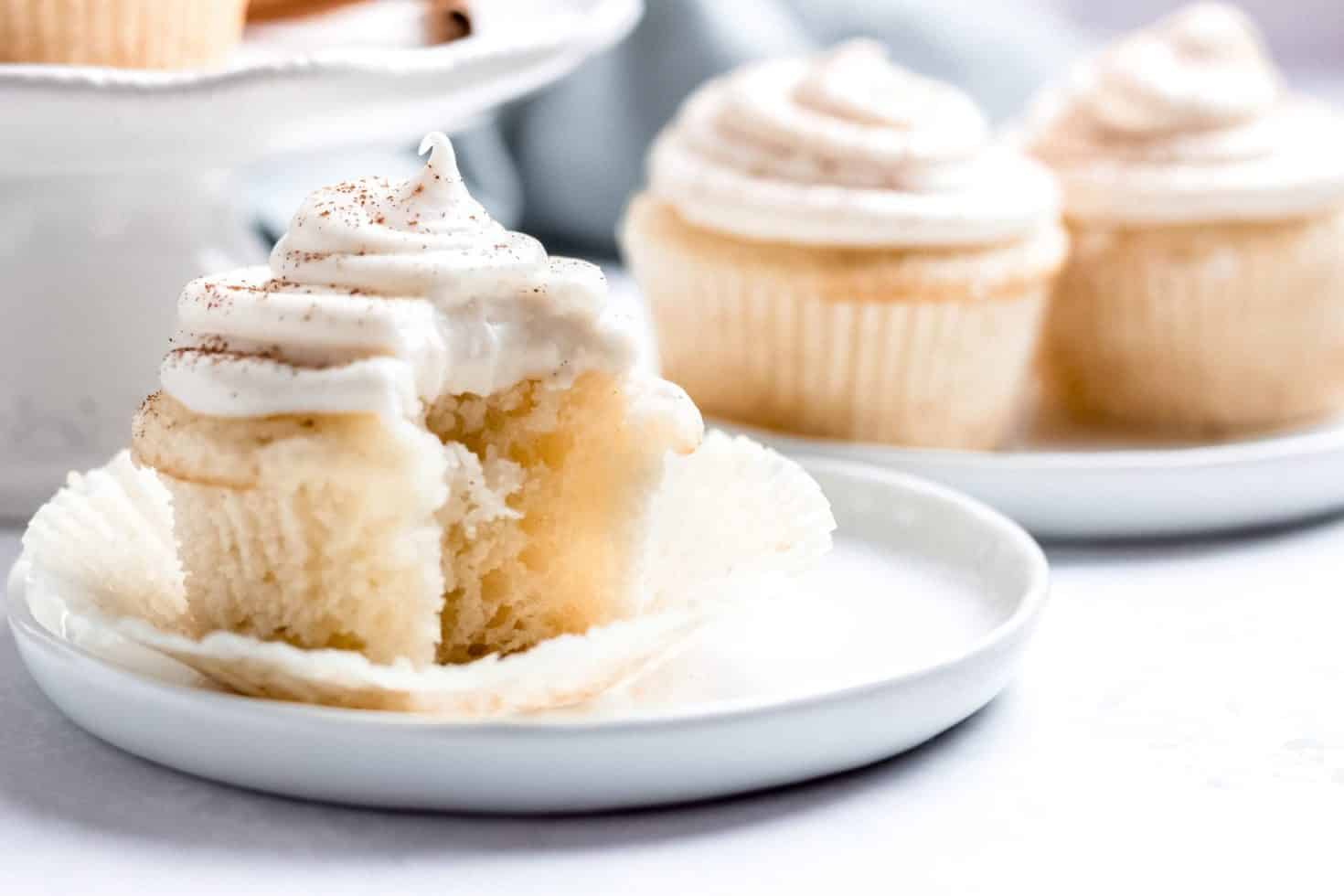 Emergency animal hospitals on a beautiful fall Sunday morning are sad places. I mean it makes sense. Everyone’s in the same boat more or less – confused, bleary eyed, a little scared, and hoping that the doc will have some good news. We were lucky. The nice vet told us that we were right to bring him in, and that we should monitor him closely over the next day, but that she reckoned he’d be back to his old self as soon as he was done digesting his sweet treat. We did just that, and now have a happy and most likely completely unrepentant kitty on our hands. But we love him, so it doesn’t much matter.

So that’s how we spent the majority of our Sunday. What fun! Seriously though, we’re very happy and very grateful that this was not the cupcake that took our sweet Boozle down.

And about those cupcakes…

I feel like sharing this story paints a truly delicious confection in a negative light. Hear me out – the cupcakes are meant FOR HUMANS ONLY. No animal weighing in at roughly nine pounds and being of a species generally known to be lactose intolerant should be eating these. But you my friend, assuming you are not a literate and internet savvy cat or dog, are encouraged to indulge.

What I love about these?

Obviously they’re adorable. But as I’m usually a stickler for substance over style, they also taste damn divine. A bouncy, vanilla cupcake, tangy and sweet all at once, is topped with swirls of maple cream cheese frosting and lightly dusted with cinnamon. I mean…really though.

Some tips for success:

Don’t overdo it. And by ‘it’ I mean pretty much all parts of this recipe. Don’t overmix the batter, don’t overbake the cakes, and don’t overthink the swoopy swirls of icing on top. I’m not a great cake decorator, I don’t own a pastry bag, and although I do spend plenty of time ogling videos of crumb coats and mirror glazes, that ain’t my game. To be clear, I wish I was better at this stuff, but it’s also OK that I’m not.

How ‘bout some do’s though:

Do make these with a friend, do eat icing out of the bowl (it’s a big batch, you’ll have some to spare), and definitely do keep these away from your furry, four-footed friends.

If you’ve made it this far, thanks for reading about our little family’s adventure. And finally because like come on already – here’s the g-d recipe 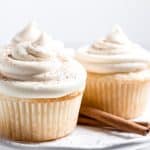 These buttermilk cupcakes are sweet, slightly tangy, and just so delicious. Top it with a swoosh and swirl of maple cream cheese frosting though, and all bets are off. As a bonus, this is also a great way to use up some of that buttermilk you might have kicking around the fridge during the holidays.

To make the cupcakes:

Line a standard muffin tin with cupcake liners. Set aside.

In a large bowl whisk together the flour, baking powder, baking soda and salt. Set aside.

In a smaller bowl, combine the sugar, eggs, oil, buttermilk, and vanilla until smooth.

Pour the wet ingredients into the dry and mix just until smooth.

Scoop about a ⅓ cup of batter for each cupcake, so each one is about ⅔’s full.

Bake on the middle rack for 20-22 minutes, or until the cake springs back gently in the middle and is light golden on top. I’d start checking at 18 minutes, as you want to err on the side of pulling them too early rather than too late.

Remove from oven and let cool in the pan on a wire rack for five minutes. Then remove cupcakes from pan and cool completely – still on the wire rack.

To make the frosting:

Using a stand or hand held mixer, beat the butter and cream cheese until smooth and fluffy – about 2 minutes.

Add the cinnamon, salt, and maple syrup and beat to combine.

Add the powdered sugar, about a ¼ C at a time, beating thoroughly between additions, until you’ve added it all. Continue to beat for one more minute.

Once cupcakes are completely cooled, frost generously and sprinkle with cinnamon. 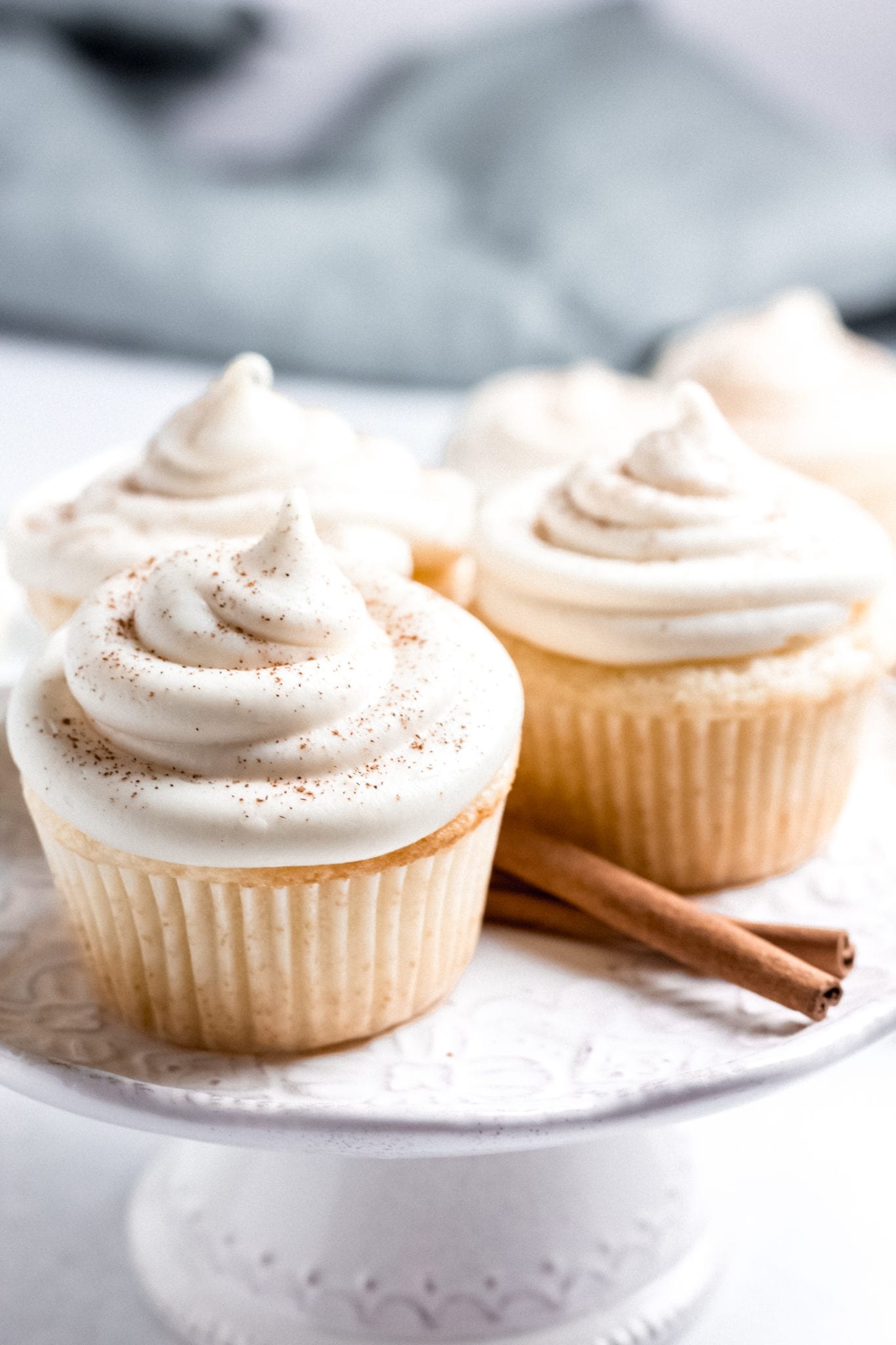